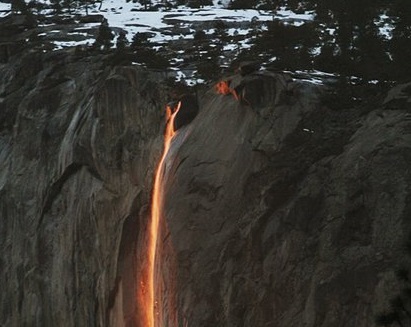 I consider it one of the most beautiful places on Earth. I try to make the 200-mile trip at least once a year to take in the wonders of El Capitan, Yosemite Falls, Half Dome, Bridalveil Falls, Mariposa Grove and Glacier Point.

But I had never seen Yosemite’s Horsetail Falls annual “firefall” — until this week.

Ever since I moved to the Bay Area and first heard about the firefall, I put it on my bucket list of things to see. That was 35 years ago. Every year, I told myself, I would make it happen. Every year, I found a reason not to go.

Two months ago I told my son and hiking partner, Cameron, this is the year. COVID-19 may have taken away many of the activities we enjoy, but it hasn’t stopped us from ramping up our outings in nature as a means of taking care of our physical and mental health. No excuses. We’re going.

For those who have never heard of Yosemite’s firefall, each year over a two-week period in mid-February, if all conditions are right, the 1,500-foot Horsetail Falls appears at sunset to flow like lava from the heights of El Capitan, as if someone had lit a match to the water. Professional photographers flock from around the world to shoot one of nature’s most spectacular phenomena.

The event has become so popular that Yosemite officials a few years ago began requiring reservations to the park during firefall season. This year, the window is Feb. 12-24.

Cameron scored a seven-day pass from Feb. 13-19. But that was only the first hurdle to a successful firefall sighting, which is far from guaranteed. It requires enough rainfall or melted snow to fill the falls, warm enough temperatures not to freeze the water, and clear skies for sunlight to hit the falls at dusk.

As we departed San Jose on Saturday, a steady rain dampened our outlook. But as we entered the park, optimism reigned. In addition to the 6-inch blanket of snow that blanketed the valley floor, patches of blue were emerging near El Capitan and Horsetail Falls.

Dozens of people joined us in setting up camera equipment to record what we hoped was a sighting for the ages. Most people wore masks and practiced social distancing. There were groans when a cloud blocked the sun from hitting Horsetail Falls, from which a thin stream of water flowed.

Sunset was scheduled for 5:35 p.m., and by 4:30 the sun was already turning the falls from white to a yellow glow. They turned a brighter and brighter shade of gold as sunset approached. But then, disaster.  A cloud covered the sun, signaling what seemed a sad ending to a such a promising day.

We packed our gear and started walking back to our car. About a quarter-mile down the road we stopped for one last glance at the falls.

A tiny sliver of bright orange emerged from the bottom of the falls. …read more

Some Bay Area worshipers returned to indoor religious services Sunday, a week after the U.S. Supreme Court struck down California’s strict ban on holding services inside buildings as a way to prevent transmission of COVID-19. Although not every facility took advantage of the decision to permit indoor services at 25% capacity, some people who returned […]

Child out of coma after crash involving Chiefs’ Britt Reid

CELEBRITIES BORN ON THIS DAY: Corinne Bailey Rae, 42; Erykah Badu, 50; Mark Dacascos, 57; Michael Bolton, 68. Happy Birthday: Update your image, and be cognizant of what’s trending this year. Keeping up will help you forge into the future with confidence. There is a chance to bring about positive changes to your life personally, […]