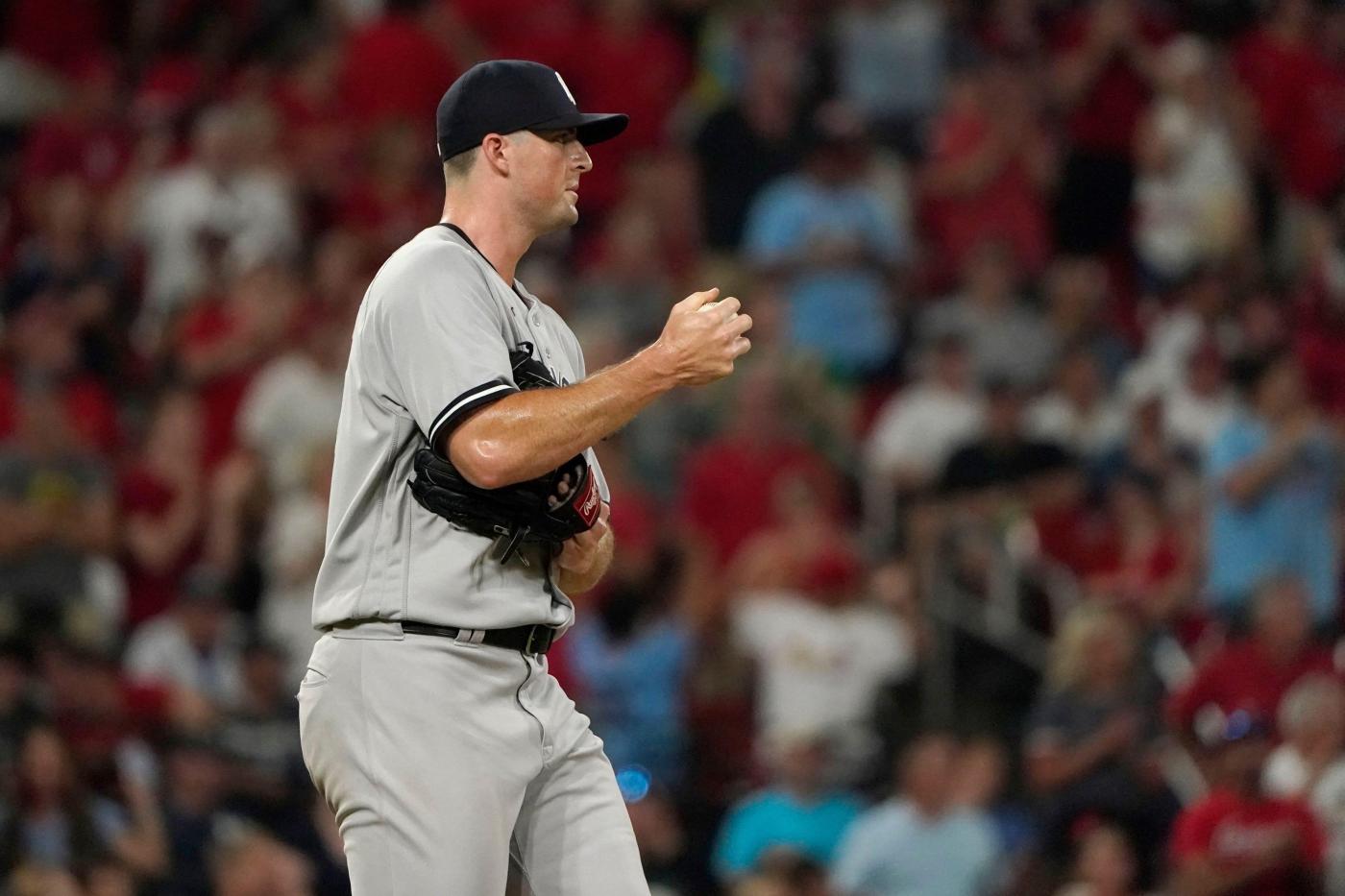 ST. LOUIS — What had started as an emotional homecoming ended as a disastrous loss for the Yankees. Hours after Matt Carpenter had been welcomed back to Busch Stadium with a standing ovation from the 46,940 fans, Clay Holmes coughed up a one-run lead in the eighth and the Cardinals rallied for a 4-3 win in the opener of the three-game series between the two iconic franchises.

The Yankees (70-37) have lost three straight. It was just the fourth time this season they have lost after taking a lead into the eighth inning. They have lost three of their last five games and are 6-9 since coming out of the All-Star Break and hold just a .5 game lead over the Astros for the best record in the American League.

Holmes gave up a one-out, infield single to Nolan Arenado and then walked Tyler O’Neill with two outs. Paul DeJong lined a sinker into right field to drive in two runs. It was the first time this season Holmes has allowed runs in back to back games, having given up three runs against the Royals on Sunday.  The blown lead Friday was the fourth lead he has surrendered in his last 10 appearances. Over his last nine appearances, Holmes, who had a 31-inning scoreless streak earlier this season, has allowed nine earned runs.

That spoiled another solid start from Nestor Cortes, who allowed two earned runs on one hit and four walks. He struck out four in 5.1 innings pitched. It was his third start of five or more innings having allowed one run or less.

Aaron Judge and Josh Donaldson each had two hits. It was Judge’s 36th multi-hit game of the season, the most in the majors. Andrew Benintendi, who was 1-for-23 as a Yankee, hit a two-out double in the eighth. It was his first hit to get out of the infield.

With Judge aboard in the first, Carpenter came to the plate to an extended standing ovation. Then he did what he could not do all too often the last two years he was here; he had a productive at-bat.

A three-time All-Star and career .263/ .369/.457 hitter who hit 36 homers in 2018, left  St. Louis after two seasons hitting under .200 and with seven homers in 180 games. The Cardinals bought out the option on his contract and Carpenter spent the winter working — at times with old teammate Matt Holiday — and then on a minor league contract with the Rangers to revamp his swing.

“I’m thankful that I’ve found success again. I think a big part of that was going back down to AAA and playing every day and having success again,” Carpenter said. “I put in constant hours and worked like crazy while I was here and just kept getting punched in the mouth every time I went out there. The success wasn’t coming.”

John Denver was one of the highest-selling artists of the 1970s, creating hit country songs and starring in many TV specials. He also had a long history of political activism and humanitarian work. However, the musician was rejected from contributing to the hit charity single “We Are The World,” leaving him deeply hurt.  John Denver […]

Travel Troubleshooter: My Turo rental was repossessed with valuable items inside

DEAR TRAVEL TROUBLESHOOTER: I rented a car from Turo in Baltimore recently. My family met our host at Baltimore/Washington International Airport, and he gave us the keys to the vehicle. Everything was going well, and we were enjoying our trip until a few days later, when we could not find our rental in our hotel parking […]

‘Never Have I Ever’ Season 3: Poorna Jagannathan Talks Immigrant Stories ‘That Never See the Light of Day’

Netflix’s teen coming-of-age series, Never Have I Ever, premiered its third season. For this season, Devi deals with romance drama again as she makes her relationship with Paxton public. While the series focuses on her teen story, it still interweaves the family trouble, expectations of marriage, and being part of Indian heritage. Never Have I […]