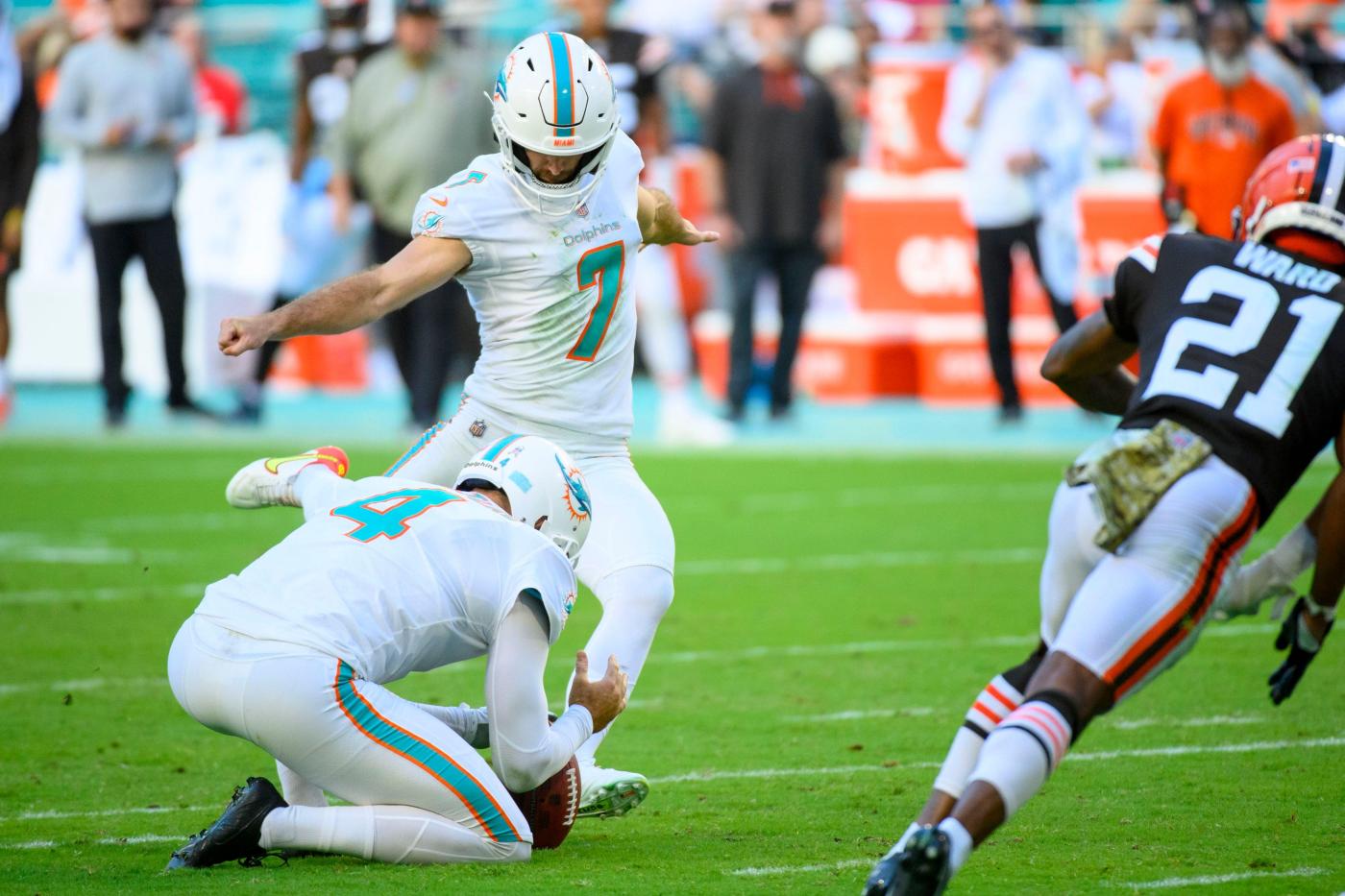 Physically, well, only time will tell.

“I just need to get the job done.”

The painful missed field goal attempt is the 29-yarder he pulled wide left in the 35-32 victory at Chicago.

Even more painful is Sanders’ 27 of 30 showing on extra points, including two misses in last week’s 39-17 victory over Cleveland.

His 76.5% success rate on field goal attempts is second-worst in the league among kickers with at least 15 attempts (Pittsburgh’s Chris Boswell is 12 of 16 for 75%).

Sanders, however, is steeled by his own confidence, and the team’s confidence, that he’ll be there when needed, something that becomes more important after this week’s game against hapless Houston, a time when the Dolphins move into the most dangerous part of their schedule.

It’s safe to say Sanders will be needed at least once.

“The position is pretty blunt,” said the five-year veteran. “Everybody sees it. But as long as you keep doing your job, taking it one kick, one swing at a time, good things will happen.”

Coaches and teammates believe the same thing. And they’ve been positive about Sanders.

They take their cue from rookie coach Mike McDaniel, who has been positive about almost everything all season, including during their three-game losing streak.

McDaniel has been unwavering in his support of Sanders. The Dolphins haven’t brought in other kickers for tryouts, and they haven’t publicly criticized Sanders during this rough stretch.

“He’s given me no reason to believe that he won’t get the things corrected,” McDaniel said.

That attitude about Sanders is contagious.

“One of the coolest things he told me,” said fullback Alec Ingold, one of Sanders’ golf buddies and closest friends on the team, “is he’s always going to be one swing at a time. He never lets anything before faze him or anything after.

“He said that and I was like, ‘Damn, I’ve never heard that from a kicker.’ But that’s exactly how he should be thinking.’ “

Regardless, Sanders is the only kicker this season with at least 25 made extra points that has missed more than two.

Sanders, Joseph and Chicago’s Cairo Santos are the only kickers to miss three or more extra …read more

It’s been over a year since fans have seen Wendy Williams on the small-screen. The former queen of hot topics is reportedly prepping a comeback after losing her long-running daytime talk show. Williams is said to be premiering a podcast in the near future. In the meantime, her salary from the talk show was revealed […]

‘Babylon’ star Margot Robbie | Tommaso Boddi / AFP via Getty Images What is Margot Robbie’s upcoming film, ‘Babylon’ about? In Babylon, Robbie portrays Nellie LaRoy. Nellie is an aspiring actor in 1920s Hollywood. Though she’s initially an outsider, she gains attention after delivering a standout performance in her first role. The film also explores […]

Staff picks for Week 12 of 2022 NFL season: Giants vs. Cowboys, Bengals vs. Titans, Buccaneers vs. Browns and more