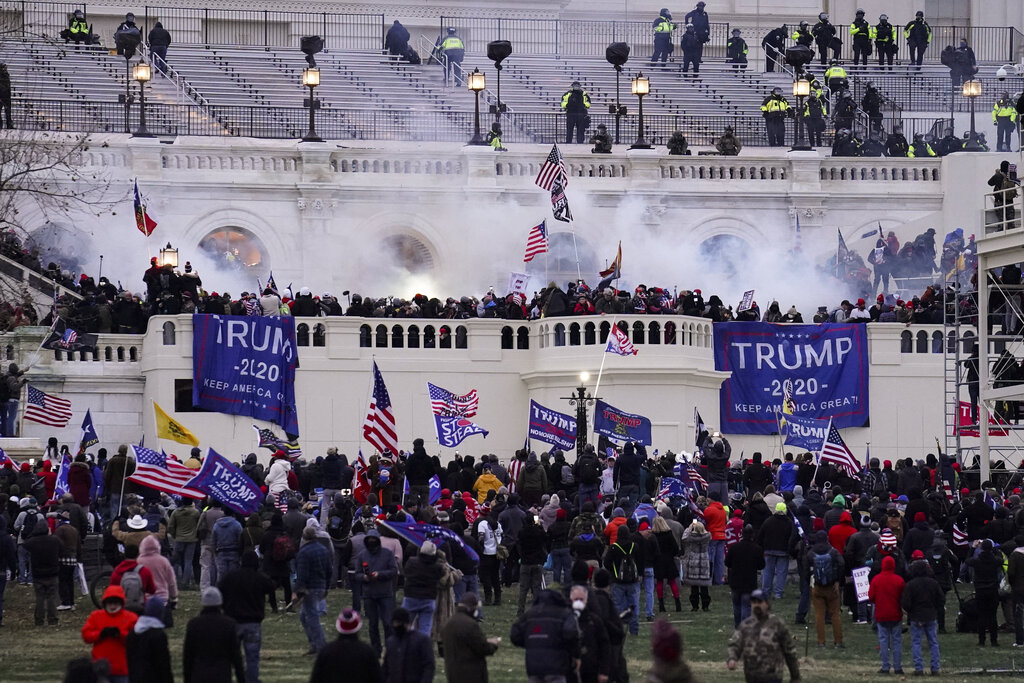 A Chicago police officer was arrested at his home Friday morning and is facing five federal misdemeanor charges in connection to the January 6 riot at the US Capitol in Washington.

Karol Chwiesiuk is charged with knowingly entering or remaining in a restricted building or grounds without lawful authority and violent entry and disorderly conduct on Capitol grounds, according to a criminal complaint filed Wednesday.

Chwiesiuk made a court appearance Friday morning before Magistrate Judge Gabriel Fuentes in Chicago and was ordered released on a personal recognizance bond, according to Assistant US Attorney Joseph D. Fitzpatrick of the Northern District of Illinois.

The FBI tracked Chwiesiuk through geolocation and communication records associated with his Google email account and phone, according to the criminal complaint.

Chwiesiuk allegedly sent photos of himself at the riot wearing a beige Chicago police sweatshirt and allegedly sent messages before the riot saying he was going to DC “to save the nation,” the criminal complaint says.

The police officer went to the Capitol the night before the riot and took 44 photographs, which he sent to three people, according to the court document.

Chwiesiuk is accused of entering Sen. Jeff Merkley’s office on January 6 and walking through the Capitol Crypt, taking a photo of himself inside the Capitol, before leaving through a broken window, according to the criminal complaint.

CNN has reached out to his attorney for comment.

Chicago Police Superintendent David Brown said Chwiesiuk was “relieved of his police powers” on June 2 after Brown became aware of Chwiesiuk’s alleged participation in the riot.

Chwiesiuk was a member of the Chicago Police Department for 2 ½ years, Brown said.

Rep. Mo Brooks served with lawsuit related to his role in Capitol insurrection

“What happened in DC on January 6 was an absolute disgrace. The fact that a Chicago police officer has been charged in that attack on American democracy makes my blood boil,” Brown said. “It makes me sick to my stomach. And yes, if these allegations are true, it breaks my heart.”

Chwiesiuk is due back in court for a status hearing on June 18 at 2 p.m. CT.

OAKLAND – A’s outfielder Mark Canha and taken his helmet off and had slowed his run to a trot after it appeared Ketel Marte of the Arizona Diamondbacks had made a rally-killing running catch in the second inning before crashing into the center-field wall. Canha put his helmet back on then started to sprint again […]

By David Crary | Associated Press U.S. Catholic bishops overwhelmingly approved the drafting of a “teaching document” that many of them hope will rebuke Catholic politicians, including President Joe Biden, for receiving Communion despite their support for abortion rights. The result of the vote — 168 in favor and 55 against — was announced Friday […]