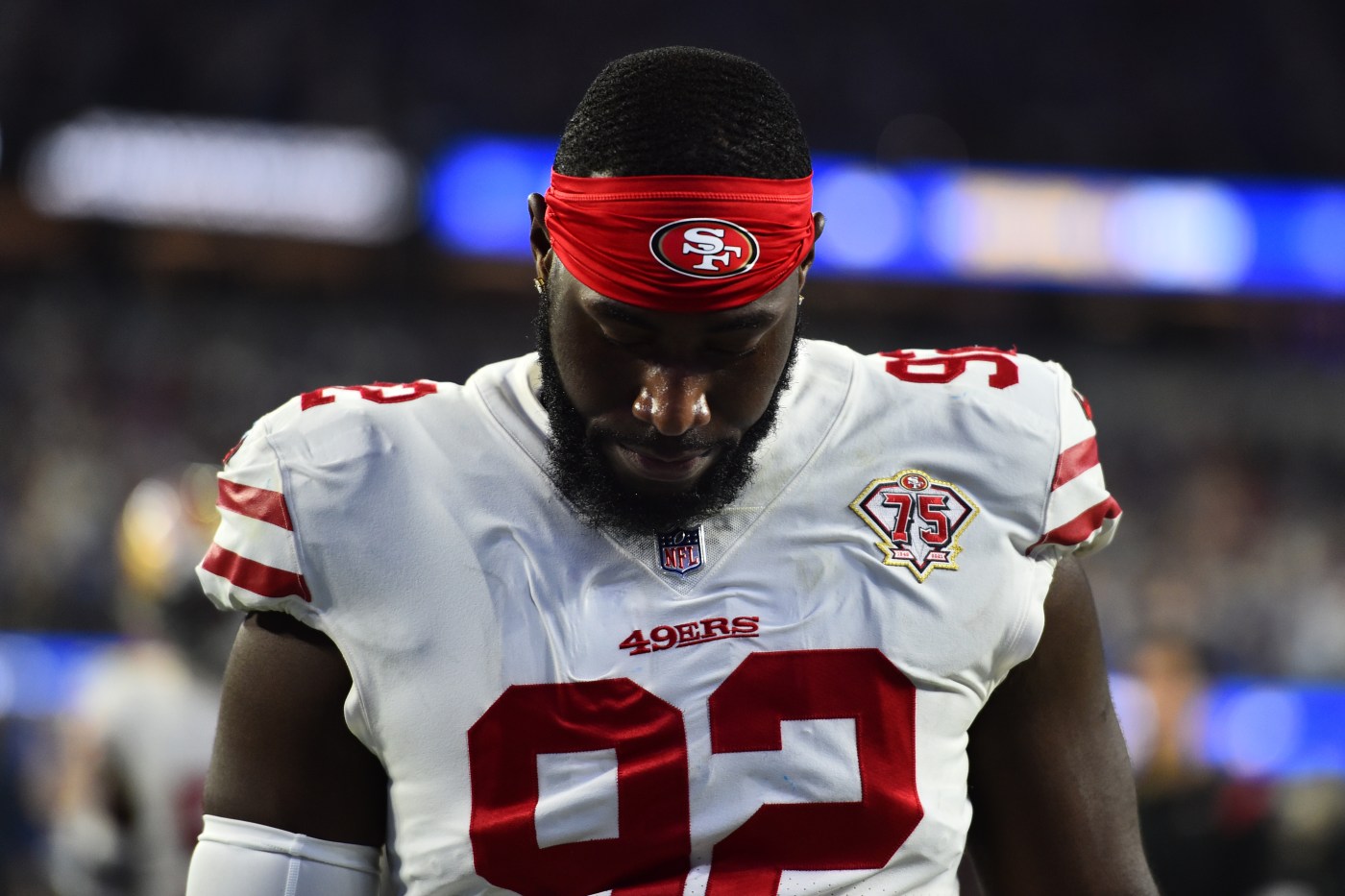 SANTA CLARA – Charles Omenihu’s career-best season with the 49ers took a turn Monday when the defensive lineman was arrested on suspicion of misdemeanor domestic violence.

A 49ers spokesman said the team is “in the process of gathering more information,” with no indication whether Omenihu’s arrest will impact his availability for Sunday’s NFC Championship Game in Philadelphia.

Omenihu was booked into Santa Clara County jail and released on bail after police responded to his Santana Row home at 4:39 p.m. Monday. The 49ers’ players, aside from film review with their position coaches, had that day off following Sunday’s 19-12 playoff win over the Dallas Cowboys at Levi’s Stadium.

Omenihu sustained an oblique injury early in Sunday’s game, and, after being examined in the locker room, he returned to total 15 snaps in his role as a versatile defensive lineman. Coach Kyle Shanahan, in Monday morning’s conference call with reporters, listed Omenihu as “day to day,” with the expectation he plays for the No. 2-seeded 49ers against the top-seed Eagles.

As for what transpired later Monday, police say a woman told them Omenihu is her boyfriend and that he “pushed her to the ground during an argument.” She complained of arm pain, but officers “did not observe any visible physical injuries” and she declined medical attention, according to a police news release.

Omenihu, 25, has had no other off-field incidents since joining the 49ers last season in a trade from the Houston Texans.

Authorities said the results of an ongoing investigation will be presented to the Santa Clara County District Attorney’s Office for evaluation of possible charges. No additional details were released. Because the alleged offense is a misdemeanor, and Omenihu is out of custody, there is no strict deadline for when charges would have to be filed.

An NFL spokesman did not immediately return a message regarding Omenihu’s arrest and whether he faces a potential suspension.

Omenihu has played a key role in one of the NFL’s best defensive-line rotations. He’s played in every game this season, battling through a knee issue at times and producing a career-high 4 ½ sacks in the regular season. In the 49ers’ wild-card win over the Seattle Seahawks, he had two sacks, one of which resulted in a fumble, and he overcame a second-quarter nerve stinger issue.

If the 49ers or the NFL keep Omenihu out of Sunday’s NFC Championship Game, a potential replacement is Drake Jackson, their top draft pick last year who hasn’t suited up in four of the past five games as a healthy scratch. Jackson had three sacks in his first six games, and he made a fourth-quarter interception in the Jan. 1 win at the Las Vegas Raiders.

Omenihu, a 2019 fifth-round draft pick by the Texans, is making $2.5 million this season. He is slated to become a free agent in March for the first time in his career.

The 49ers acquired him for a sixth-round pick on Nov. 2, 2021, and although he did not have a sack in that regular season with either …read more

The Chicago Bulls had the win in the bag. With three minutes left in the third quarter of Saturday’s road game against the Orlando Magic, they held an 89-64 lead and every ounce of momentum. But Bulls fans have seen this film before. They know how quickly the ending can change. The Bulls let a […]

By Barbara Ortutay and Jill Colvin | Associated Press Facebook parent Meta is reinstating former President Donald Trump’s personal account after a two-year suspension following the Jan. 6 insurrection. The company said in a blog post Wednesday it is adding “new guardrails” to ensure there are no “repeat offenders” who violate its rules. “In the […]

At only 20 years old, Maddie Ziegler has had quite the career. These days, Ziegler can be found starring in movies like West Side Story, The Fallout, and the upcoming, Bloody Hell. But while Ziegler has begun getting meatier acting roles as of late, she’s actually been acting for a number of years. For example, […]