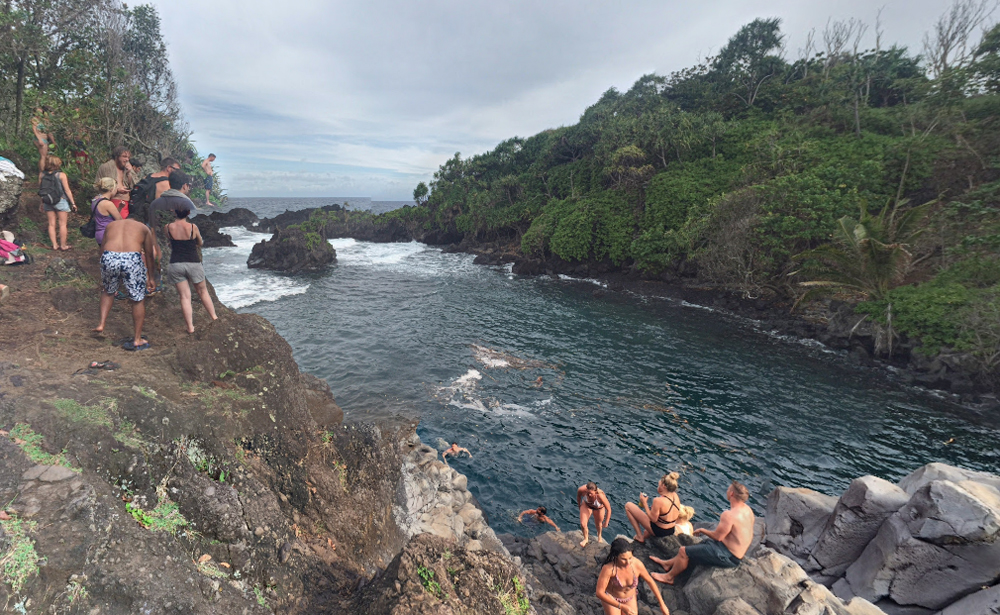 A California woman is dead after being swept to sea from a Maui swimming hole known for its flash flood danger.

The tourist, identified only as a 26-year-old from Vista (San Diego County), was among four swimmers who were in Waioka Pond when a sudden rush of water came down the hillside shortly before 10 a.m. Thursday, the Maui Fire Department said.

Two of them were able to climb to safety at the edge of the pool; the two others were swept across the narrow beach and into the ocean. One of those swam back to shore, but the woman remained missing.

Around 1:30 p.m., searchers found her unresponsive on a beach. She was airlifted to medics, who pronounced her dead, the fire department said.

Maui was under a flash flood watch Thursday because of heavy runoff from storms.

Waioka Pond, also known as Venus Pools, is a popular tourist destination just south of Hana, on Maui’s eastern tip. It sits on a rocky beach below the Hana Highway.

Signs at the trail entrance warn of the risks from flash flooding and slippery rocks.

Pismo Beach: Body thought to be that of man who jumped from pier

Child out of coma after crash involving Chiefs’ Britt Reid

Man injured after getting caught in doors of BART train

SCOTTSDALE, Ariz. — During a press conference with reporters in early February, Giants president of baseball operations Farhan Zaidi hinted at some concern regarding first baseman Brandon Belt. Zaidi said Belt, who underwent surgery on his right heel in mid-October, might not be ready for Opening Day. Now that Cactus League games have begun, there’s […]

By Jake Bleiberg and Mark Scolforo | Associated Press DALLAS — Warmer temperatures spread across the southern United States on Saturday, bringing some relief to a winter weary region that faces a challenging clean-up and expensive repairs from days of extreme cold and widespread power outages. In hard-hit Texas, where millions were warned to boil […]

SAN JOSE — The outlook for commercial real estate in Silicon Valley remains “hazy” for the moment due to ongoing economic setbacks and uncertainties that the coronavirus has unleashed, Colliers International reported Wednesday. One possible bright spot in the dark and forbidding economic landscape created by the coronavirus: a surge in venture capital funding for […]