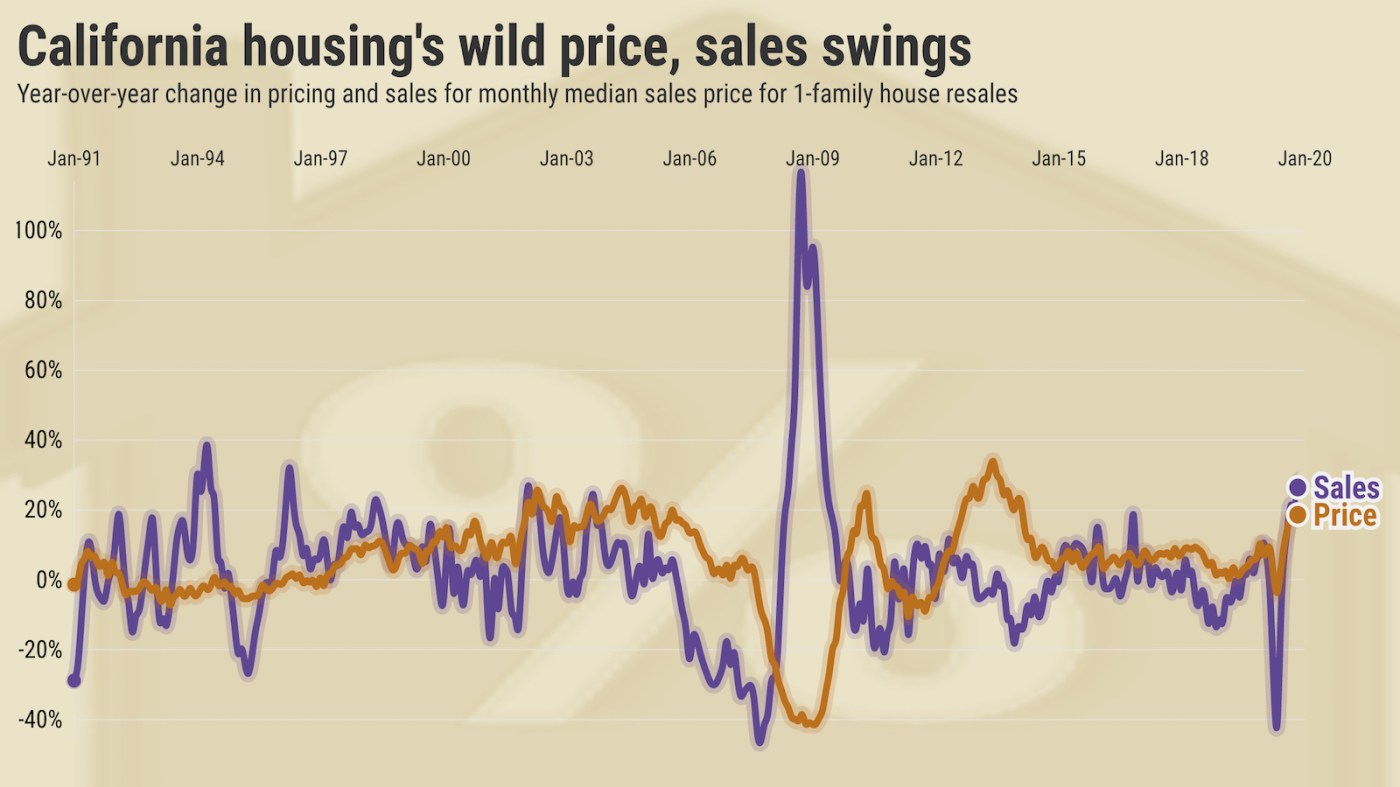 “Bubble Watch” digs into trends that may indicate economic and/or housing market troubles ahead.

Buzz: California’s housing market in January had its largest twin surge in sales and pricing in 17 years.

If that’s not overheated to you, consider this: The last time sales and prices jumped more than 20% in the same month it was August 2003.

And “FOMO” momentum — that’s the “fear of missing out” on a trend — created bidding wars, pushing prices upward.

“With the COVID-19 vaccine continuing to roll out, another fiscal stimulus relief package likely on the way and historically low interest rates, the housing market will continue to thrive,” says Jordan Levine, the association’s chief economist.

“The market outlook is stronger than previously projected as buyer demand continues to outstrip supply, but we do expect the current robust market growth to decelerate later this year as the housing shortage intensifies,” he said.

On a scale of zero bubbles (no bubble here) to five bubbles (five-alarm warning) … FIVE BUBBLES!

This pace seems unsustainable. Well, unless cheap money lasts forever and the eradication of the pandemic keeps folks in a panic-buying mode.

Note: Bubbles don’t have to burst. Overvaluations can be part of a market for extended periods. Think back to 2002-03 — the last only other 20/20 upswings in California. I’d argue that housing momentum ballooned into a euphoria that set the stage for stupid lending. When those loans imploded, the market burst into the Great Recession.

OAKLAND — A 32-year-old man was shot in East Oakland late Monday night, authorities said. He was in stable condition with a shoulder wound, authorities said. The shooting was reported at about 11 p.m. Monday in the 1500 block of 101st Avenue. The man, an Oakland resident, told police he was walking to a store […]

Dear Abby: I have a career now. Will my old friend drag me down?

DEAR ABBY: I have known my friend “Isabella” since elementary school. When we were teenagers, we both developed medical problems. Jeanne Phillips  I tried to help her as much as I could, but it became clear that she was having trouble dealing with her condition. She was headed down a bad path and struggling emotionally, […]

Tom Brady, into the tequila, tosses trophy across water. ‘Dad, no!’ his daughter yells.

Tom Brady’s giddy appearance at the Tampa Bay Buccaneers’ victory parade had the internet buzzing. The seven-time Super Bowl champion quarterback was cheered wildly Wednesday as the team’s boat parade passed on the Hillsborough River — particularly when he made a risky over-the-water toss of the Lombardi Trophy.  It seemed ill-advised to his 8-year-old daughter, […]