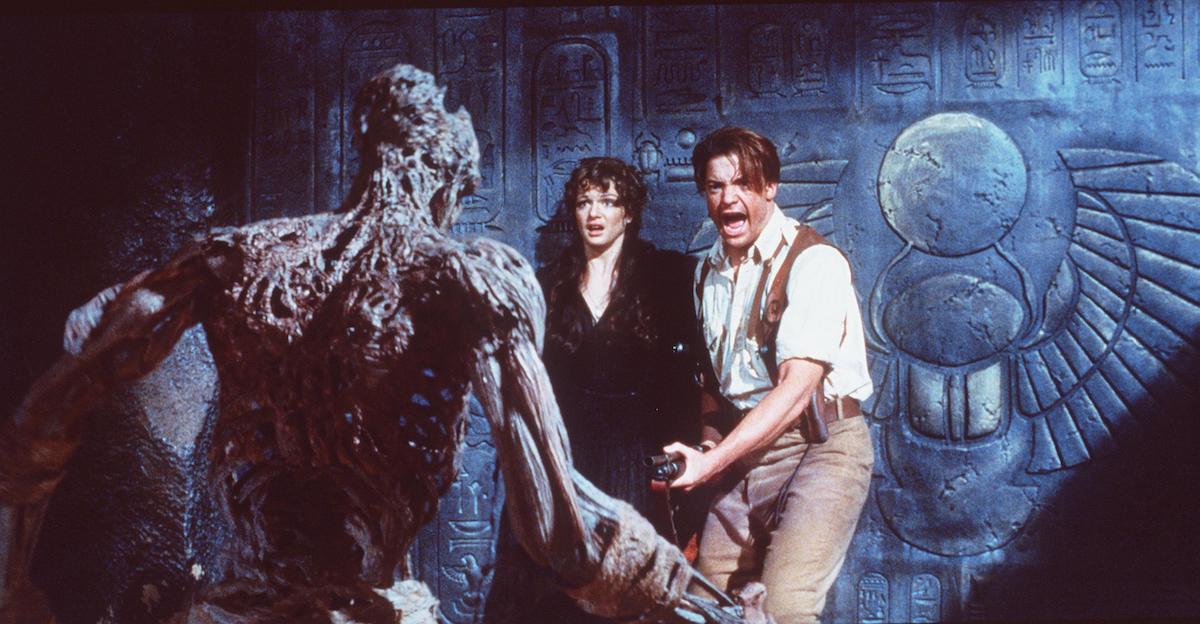 When asked by a fan at FAN EXPO Canada if he would sign on for a reboot of the Mummy movies if approached,

Not many celebrities can say that they’ve been around at least three decades, took a several-year break and were still cheered on to come back bigger and better than ever — except now Brendan Fraser. Despite his time away from Hollywood, old and new fans are hyped to see him heading back to the big screens and hoping the Mummy franchise will soon follow.

Now that the ’90s star is officially being cast in big roles again, this is a genuine possibility. However, Fraser says it will only return to the Mummy franchise under this one, wonderful condition. In the meantime, there will be plenty of films to kick back and watch with the actor in it — including one directed by Martin Scorsese.

Fraser’s retreat from Hollywood was a heartbreak, but his success prior was unmistakable. Of his more than 70 acting credits, fans know him best as George in George of the Jungle, Professor Trevor Anderson in the Adventure at the Center of the Earth, and Dan Sanders in the Furry Vengeance.

Above all else, Fraser has always been known as the incredible Rick O’Connell in all the Mummy movies.

In the horror-adventure movie from the late 90s, Fraser plays O’Connell. The leading man is an explorer who, along with some friends, decides to go on a dig expedition that leads to discovering an old tomb that unleashes ancient horror.

The mummy inside the tomb is a 3,000-year-old ancient Egyptian priest that was mummified and condemned to an eternity as a living dead. Following its resurrection, O’Connell and his friends take on the challenge of stopping him from taking out his vengeance on them and the world.

He would ‘absolutely’ return for another ‘The Mummy’ as long as…

When asked by a fan at FAN EXPO Canada if he would sign on for a reboot of the Mummy movies if approached, Comic Book reports that Fraser shouted a booming “Absolutely!”

Of course, this answer doesn’t come without its one condition. And can I just say: it is the most ‘Fraser’ response he could have given fans.

“Just gotta say, I know how hard it is to make that movie,” the 90s star said. “I tried to do it three times, and the essential ingredient is fun. You gotta remember to have fun. So if there’s a fun way to approach it again, I’m all in.”

Fraser has blessed fans with a long-awaited return to Hollywood

We are one step closer to another Mummy movie with the Hollywood return of its leading star Brendan Fraser.

The actor has been out of the game for quite a while now — mostly appearing on TV shows from 2015 until hitting the big screen again in 2019 (Line of Descent and The Poison Rose), once again in 2020 (The Secret of Karma), and once more in 2021 (No …read more

‘The Golden Girls’: The Meaning of the Exclamation Point on the Door Explained

The cast of ‘The Golden Girls’ | Steve Fontanini/Los Angeles Times via Getty Images Larger, high-definition TVs have made small details from the set of some shows a lot easier to pick out. The Golden Girls is one of those shows. The details of The Golden Girls was popular when it originally aired in the 1980s and early […]

Nicki Minaj | Getty Images Queen Nicki Minaj skipped The Metropolitan Museum of Art’s most recent gala to the dismay of The Barbz, her eclectic and vocal fans. The 2021 Met Gala has always been an event where vibrant celebs like Nicki, fashion elites, and others who could afford the $30,000 tickets gathered to celebrate […]

Hollywood is far from short of Spider-Man remakes and reboots. Between two decades of Marvel and Sony Spider-Man films (and several before it, dating as far back as 1969), we have seen so many adaptations of Peter Parker and his infamous spider bite since the Sam Raimi films that you’d think they were milked for […]