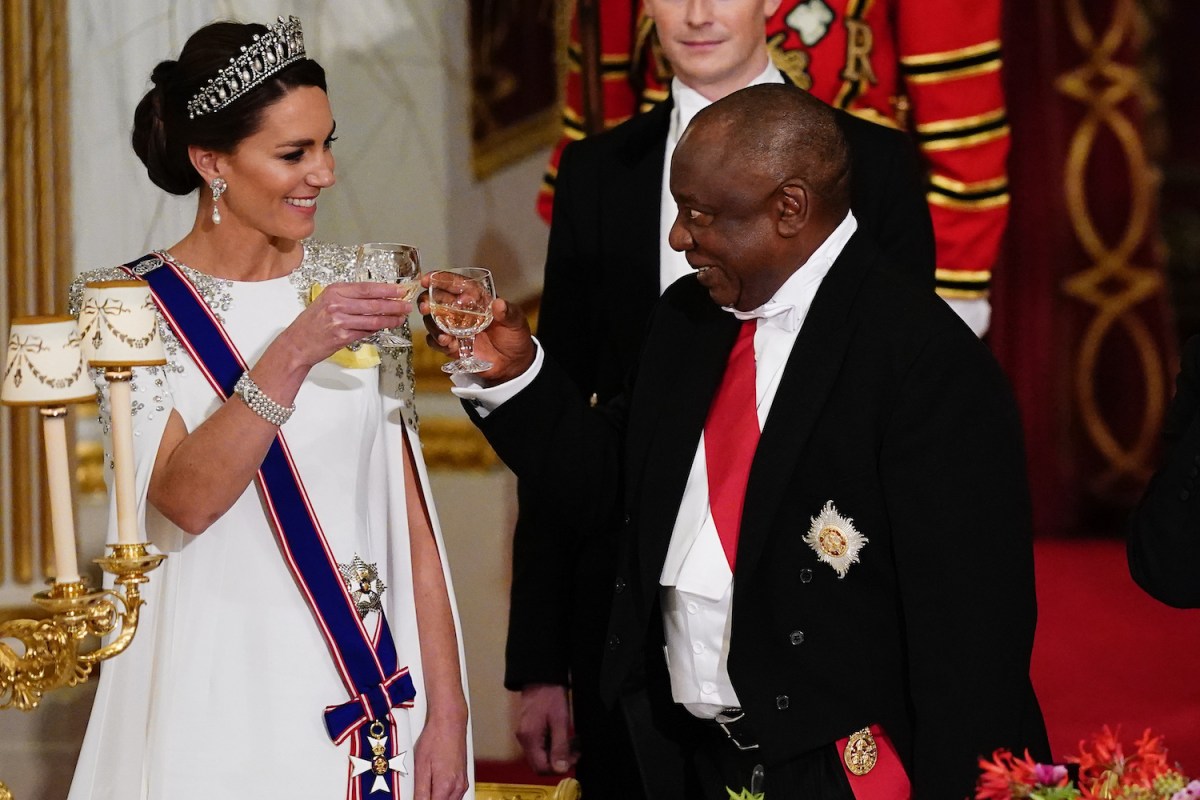 Speaking on behalf of

Kate Middleton looked elegant at the Nov. 22 state banquet held in honor of South African president Cyril Ramaphosa at Buckingham Palace. A body language expert shared his analysis of Kate’s fashion choice, noting that she “looked every part the queen.”

The Princess of Wales wore a gorgeous white Jenny Packham gown as well as a pearl bracelet that once belonged to Queen Elizabeth and earrings that belonged to Princess Diana. She also wore the Queen Mary’s Lover’s Knot tiara, a favorite of Diana’s.

“I think Kate looked every part the queen,” Stanton explained. “I don’t think there have ever been such striking photographs published to date with Kate looking so regal.”

He continued, “Comparisons have been made to Princess Diana, as Kate wore a tiara she’d also worn. I think most would agree it’s frighteningly similar and reminiscent of the late royal.”

Stanton noted, “Although she may not be the ‘queen of people’s hearts’ as Diana wished to be known, I’m quite sure that Kate is definitely one of the most popular figures now in the senior royal family.”

The body language expert added, “I think her success is largely down to her authenticity and willingness to connect with everyone.”

During the state dinner, Kate shared a moment with President Ramaphosa, when they raised their glasses for a toast.

“There was a great photograph of a moment when Kate and the South African president were saying cheers with their drinks,” Stanton pointed out. “They had complete rapport with each other as they mirrored each other’s body language unconsciously.”

He continued, “Kate displayed a genuine smile denoted by all of her facial muscles being engaged, and it’s clear even from the position of the camera in relation to the president that he was completely mesmerized by Kate’s presence.”

Stanton added, “His eyes were wide and dilated and this happens when we enter the state of reciprocal liking.”

RELATED: Body Language Expert Points Out How Kate Middleton Has Changed Since Becoming Princess of Wales

Kate Middleton’s dress color was a move to not ‘put herself in the spotlight,’ expert says

Stanton also looked at the plum-colored dress Kate wore earlier that day during state visit engagements, believing it was a deliberate move not to take the spotlight away from Camilla Parker Bowles. The Queen Consort wore vibrant blue to both the daytime engagement and the state banquet, pairing her evening gown with a diamond and sapphire tiara and matching necklace and bracelet.

“We also see Kate adopting a more plum or maroon color dress, which is still proportionate to her position as future queen and senior member of the royal family,” Stanton noted.

The body language expert added, “However, it is not an overpowering …read more

Cowboys owner Jerry Jones said Tuesday that he is not concerned about free agent wide receiver Odell Beckham Jr. visiting the Giants and Buffalo Bills before he heads to Dallas as early as next Monday. “Not at all,” Jones told 105.3 The Fan in Dallas. “As a matter of fact, if you look at what […]

DUBLIN — A San Leandro woman suspected of running a “sophisticated” meth smuggling ring centered within the Santa Rita Jail has been charged with two felonies, court records show. The 31-year-old woman was charged with two counts of selling a controlled substance. Authorities say she is alleged to have sent postcards soaked with liquidized methamphetamine […]