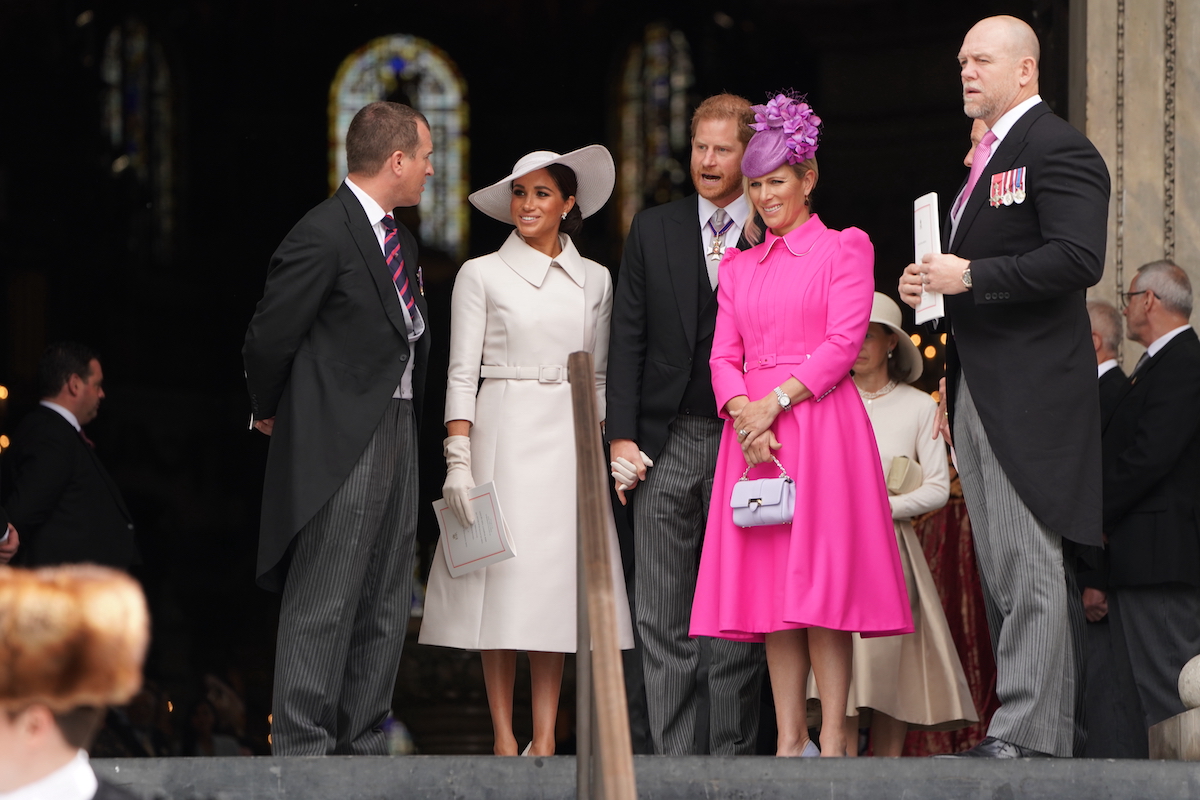 Prince Harry and Meghan Markle stood on the steps of St. Paul’s Cathedral following a National Service of Thanksgiving.
Zara Tindall spoke to the couple while her husband, Mike Tindall, stood nearby in what a body language expert called a moment of “awkwardness.”
According to the expert, Mike Tindall’s relationship with Prince William may have created a “dilemma” for him with Prince Harry.
Mike Tindall reportedly called Prince Harry a “b*****d” at another Platinum Jubilee event.

Prince Harry and Meghan Markle returned to the UK for Platinum Jubilee weekend. Their seats in the second row at a jubilee service ensured they were nowhere near Prince Charles, Prince William, or Kate Middleton. On their way out, they chatted with the Duke of Sussex’s cousin, Zara Tindall. Meanwhile, her husband, Mike Tindall, stood by in what a body language expert described as “awkwardness.” Per the expert, Tindall’s “closeness” with Harry’s brother seemed to have created a “dilemma” with the Duke and Duchess of Sussex.

“Mike is one of the most open, spontaneous, and playful members of the royal family, looking relaxed and chatty at even the most formal events,” she said. “His body language with William recently has shown up some very close emotional ties between the two men.”

James referenced their “play-fight” and “intense hugging” at horse trials in May 2022, just shortly before Platinum Jubilee weekend began. It “goes beyond friendship and into affection and closeness that looks like brotherly or even paternal love,” she explained.

Examining footage from the National Service of Thanksgiving, James said Tindall’s “awkwardness” with Harry may have offered a glimpse of the “pain and anger” William could still have relating to the brothers’ rift.

“With Mike’s closeness to William in mind, it also appeared to have created a bit of a dilemma as Harry stepped out into Zara’s group as they waited for their transport,” she said. “Zara looks happy to chat and even turns fully to talk to Harry here, who is looking anxious and keen to get into his own car.”

As for Mike, James pointed out how he didn’t turn his head to join the conversation. He remained “looking about and holding his order of service up with a look of awkwardness.”

Ultimately, Tindall talked to another guest. And, according to James, it’s not his “normal style” of behavior.

“He usually looks too easy-going and too tough to get involved in politics and it could be that his attention was taken arranging the right cars, but there are no signs of any farewell from him, either,” she said.

‘The Umbrella Academy’ Will ‘Dig More Into’ Ben’s Lethal Accident

Justin H. Min in ‘The Umbrella Academy’ Season 3 | Christos Kalohoridis/Netflix So why didn’t the show start with more information about Ben’s past? The show’s co-creator gave a good reason to The Umbrella Academy has kept one aspect of the main characters a mystery. Ben Hargreeves (Justin H. Min) died long ago, and fans […]

5 Netflix Original K-Dramas From 2022 With the Highest Scores, According to IMDb

As K-dramas have become an even bigger global phenomenon, Netflix has dominated in developing riveting stories that had fans hooked. At the beginning of 2022 alone, Netflix released award-winning K-dramas alongside Korean cable companies like Twenty-Five Twenty-One. There are still more dramas for the year, but some have a high score to beat. ‘Juvenile Justice’ […]