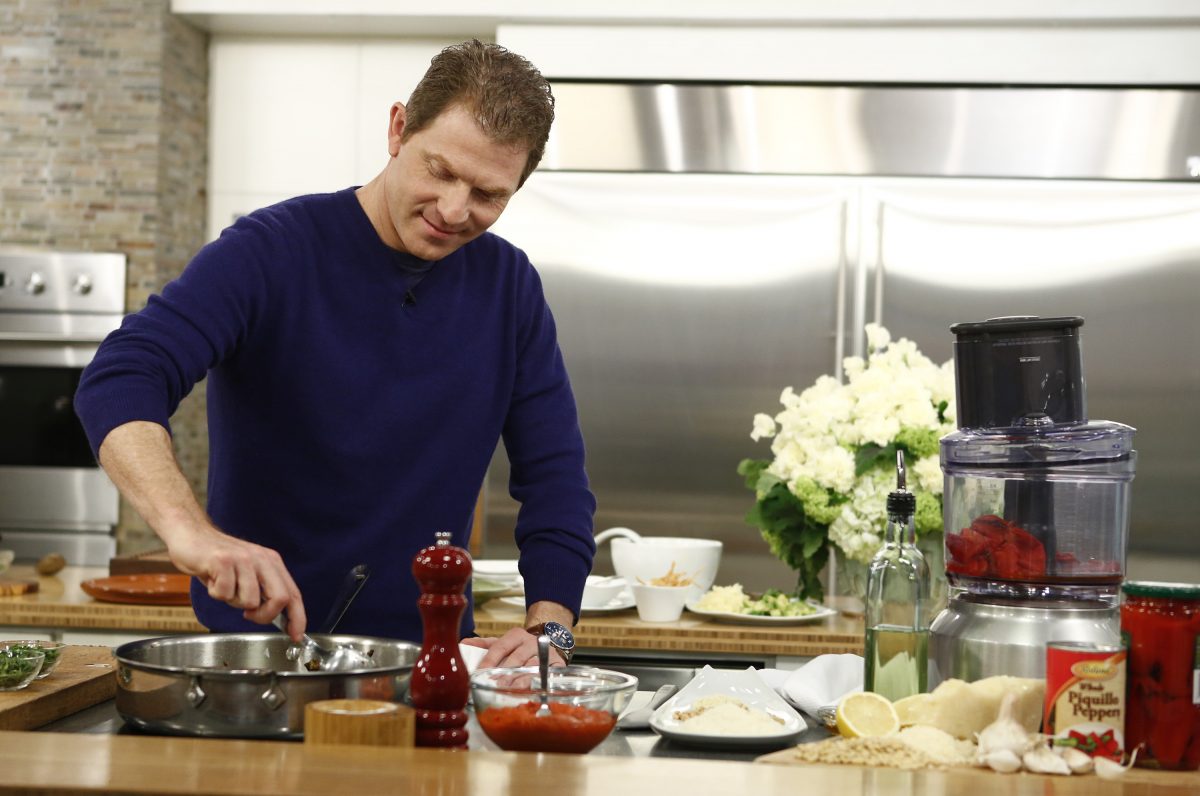 Complete your next picnic or barbecue gathering with Food Network star Bobby Flay’s German Potato Salad recipe. With bacon, a killer vinaigrette dressing, onions, and of course, potatoes, the chef’s salad is sure to be a hit.

Emphasizing the use of bacon in German-style potato salad, Flay noted, “I mean, really, how many better things in the world are there than bacon? When you put bacon in something, it tastes good. People love bacon, I do for sure.”

The chef boils the new potatoes and yellow onions together in the same pot in salted water, chopping both up into big chunks.

He chops up thick-cut bacon also into large pieces (“Get that nice smoky slab bacon”) and cooks it in a skillet “slowly, so all the fat renders and it gets nice and crispy.”

While the potatoes continue cooking, Flay spoons out the crispy bacon chunks, leaving behind its delicious grease for the red onions, which will cook in the bacon fat.

The potatoes are done, the chef says, when a “knife goes in without any resistance.” He drains the hot water from the onions and potatoes and shares an important “key” to making this side dish perfectly.

Cold cooked potatoes, he adds, “will actually repel the dressing.”

He places the chopped, warm potatoes in a bowl and prepares the dressing by adding vinegar to the bacon-grease-sauteed-red onions and pouring that into the potato, onion, and bacon mixture. Green onions are added, followed by the mustard, olive oil and, of course, salt and pepper.

Get the complete recipe, video, and reviews on Food Network’s site.

With its generous use of bacon, onion, and its flavorful bacon-y vinaigrette, there’s a lot to like about Bobby Flay’s potato salad, as many Food Network reviewers noted in five-star reviews.

One home cook reported becoming a lover of potato salad lover thanks to this recipe: “I don’t even like potato salad but when I make this, it is all I eat. The flavors are perfectly balanced. It isn’t too hard to make …read more

‘Persuasion’: Release Date, Cast, and Everything Else to Know About Netflix’s New Jane Austen Adaptation

TL;DR:  Netflix’s Persuasion hits the streaming service July 15.  A trailer for the movie, which stars Dakota Johnson, Henry Golding, and Cosmo Jarvis, drew mixed reactions from fans of Jane Austen’s novel.  Johnson says she was drawn to the “modernized” take on the classic book.   Another Jane Austen adaptation is coming to a screen near […]

‘Only Murders in the Building’: Selena Gomez’s Character Mabel Was Originally an Older Man

Selena Gomez made Only Murders in the Building a trio. Steve Martin and Martin Short star as amateur sleuths in a New York apartment building. Gomez plays their young neighbor, Mabel. But, Mabel was originally conceived to be another older gentleman. Here’s how the role changed.  Selena Gomez | Barbara Nitke/Hulu Gomez was a guest […]