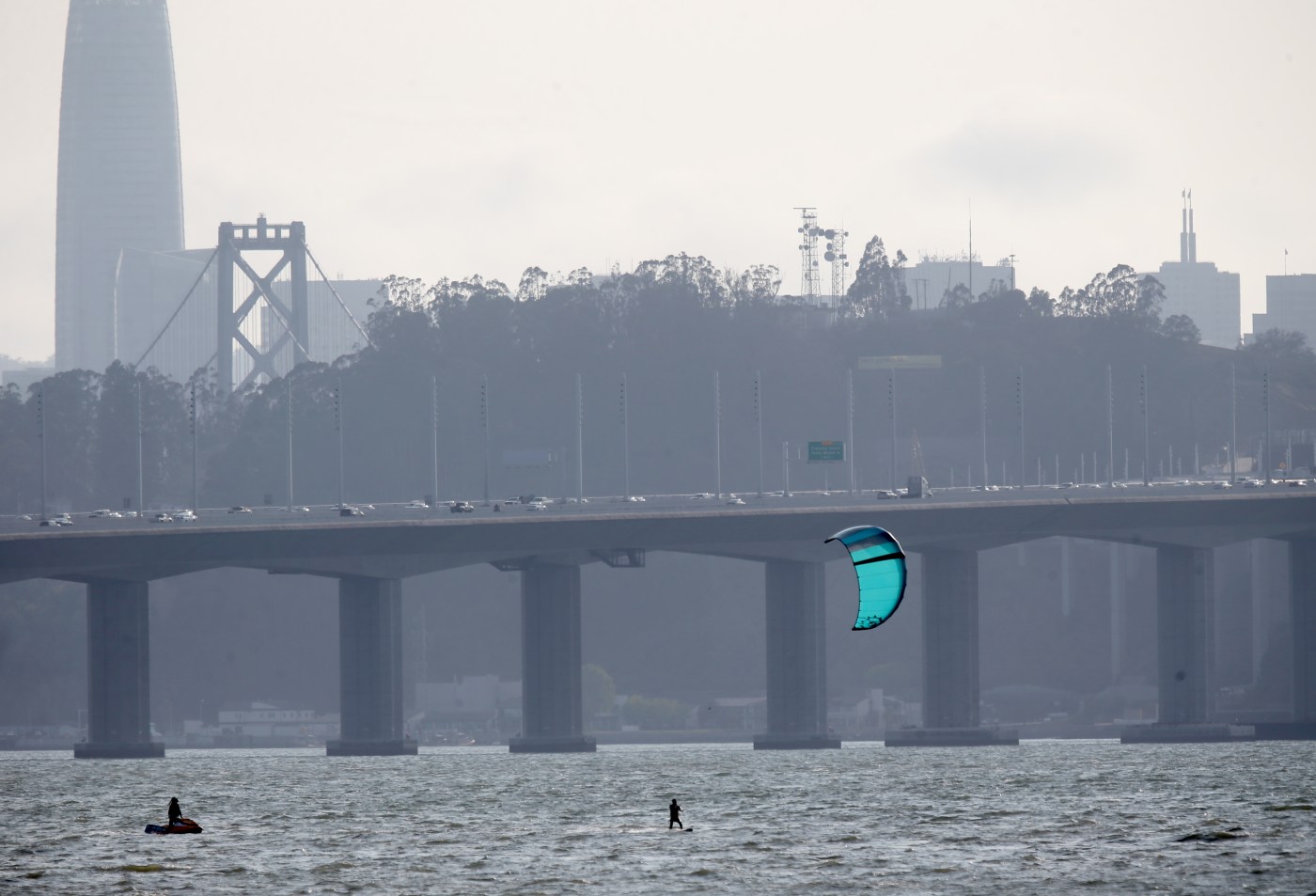 Blue sky slowly peeked in amid the haze, initially small patches and then larger ones. Coastal fog appeared, then began to burn off slowly with the progression of the sun. A bit of mist even emerged, and it wasn’t ash.

It only took a month.

As the Bay Area settled into its 30th consecutive Spare the Air Day — a record number that equals the total number of alerts for the past four years combined — the region was still reveling in the cleansing received from a new low-pressure system moving down from the Northwest and migrating north toward Oregon and Washington.

The 6 a.m. air quality index readings by the Bay Area Air Quality Management District were below 50 throughout the region — the worst air was in Gilroy, where the fine particulate matter was 42 — and below 10 near Lake Merritt in Oakland. San Pablo and Livermore also were below 10, and San Rafael and Sebastopol in the North Bay measured zero.

Anything below 50 is considered good air.

“The system that is moving in is pushing the smoke to the north and to the east,” Murdock said. “It’s also pushing the smoke up into the higher levels of the atmosphere, and that’s why you’re seeing the better air closer to the ground.”

Up high, haze still hung as a barrier, but the weather service said it is becoming less thick and will continue to do so as the winds shift.

The new system is also cooling off the area and will keep temperatures in the 70s in the far inland areas and in the 60s nearer to the coast, Murdock said. It also brought a tiny bit of mist and precipitation to areas of the South Bay and North Bay, according to residents there. None of it was measurable, according to the weather service.

Now the question becomes whether the region’s smoke-filled days are truly over or just taking a quick timeout.

“Instead of that low pressure moving inland, it will stay near the coast, and we’ll see some winds start to shift a little bit from the north,” Murdock said. “That could push smoke back into the area.”

If that happens, he said, it likely wouldn’t occur until early next week.

Smoke from the West Coast wildfires has reached Europe

Wildfires are ravaging the West coast. Here’s how you can help

Map: How close is Bobcat Fire to Mount Wilson observatory?

When is the Xbox Series X coming out and how much will it cost? That’s been the question from gamers since the console was announced at E3 2019 as Project Scarlett, and though information about the console has been leaked over the past few months, Microsoft finally confirmed the details Wednesday. The Xbox Series X, […]

BUTTE COUNTY – Authorities on Monday night announced the recovery of additional human remains in the North Complex West Zone Fire and identified four of the victims. The death toll in the wildfire now stands at 15, said Butte County Sheriff-Coroner Kory Honea at a news conference. Honea identified two of the victims as John […]

‘The Walking Dead’ to end — but more spinoffs coming

In a move that many viewers will consider long overdue, AMC announced on Wednesday that its flagship series, “The Walking Dead,” will end with an 11th season. But hold on. That season will consist of 24 episodes spread out over two years. Also, the zombie-studded franchise will expand with not one, but two more, spin-offs […]