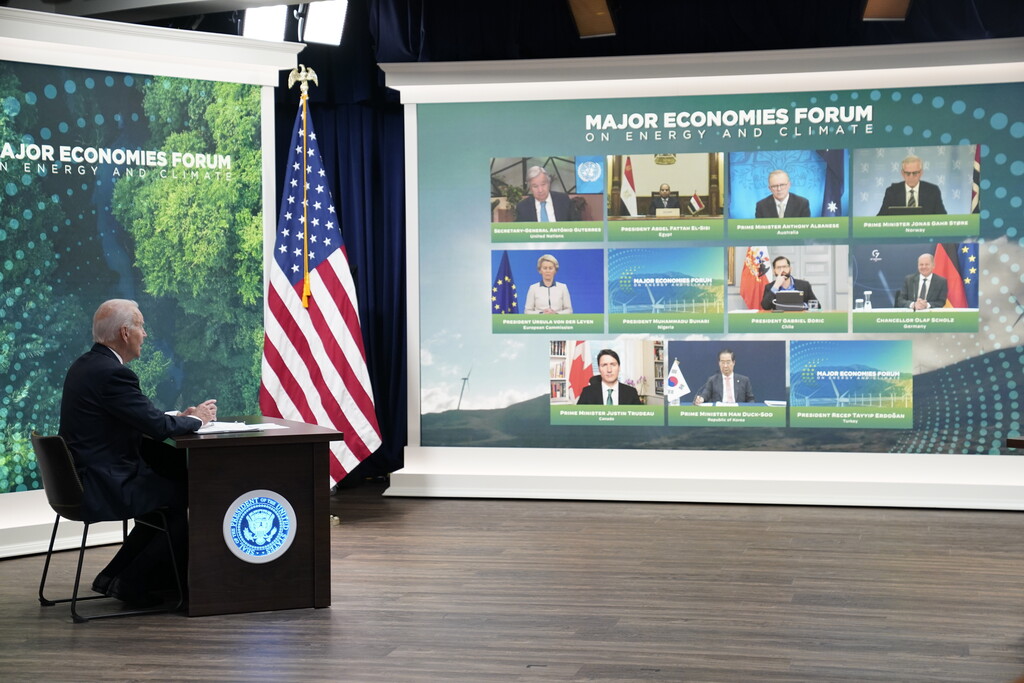 WASHINGTON — Equating the oil and gas industry to Big Tobacco, United Nations Secretary-General Antonio Guterres said Friday that “fossil fuel producers and financiers have humanity by the throat.” But President Joe Biden wasn’t quite itching for a fight.

With both soaring energy prices and a warming planet weighing on the world at the Major Economies Forum on Energy and Climate, Biden talked about trying to ease the pain of high gas prices while pushing more long-term green policies.

Dismissing the idea of boosting gasoline production, the United Nations’ top diplomat threw out traditional diplomatic niceties and bluntly vilified the fossil fuel industry at a virtual session that included oil rich Saudi Arabia, China, Europe and Egypt, which is hosting the next United Nations summit on climate change. It was the first time Guterres compared the energy industry to tobacco interests, saying they use “the same scandalous tactics” to delay action that is good for people and the planet.

Biden reiterated his goal to lower gasoline prices that are averaging a record $5 a gallon in the U.S. while also shifting away from fossil fuels in order to limit climate change and the risks it presents.

“I’m using every lever available to me to bring down prices for the American people,” Biden said. “But the critical point is that these actions are part of our transition to a clean and secure and long-term energy future.”

Biden is also expected to visit Saudi Arabia next month. The White House recently praised the kingdom after OPEC+ announced that it would pump more oil to boost the global supply.

Guterres dismissed more drilling, saying “nothing could be more clear or present than the danger of fossil fuel expansion.”

“Had we invested earlier and massively in renewable energy, we would not find ourselves once again at the mercy of unstable fossil fuel markets,” Guterres said. “Let’s make sure the war in Ukraine is not used to increase that dependency.”

The secretary-general decided to amp up the rhetoric because of successful efforts by the industry to use the war in Ukraine as an excuse to start drilling projects, said a senior U.N. official who spoke on the condition of anonymity due to lack of authority to speak for the agency.

“It is very interesting to see the change in tone from the secretary-general. His language is blunter than any secretary general before him,” said Niklas Hohne of the New Climate Institute in Germany. “This comes at a time when we indeed observe a goldrush to new fossil fuel infrastructure… Such expansion is counterproductive to climate policy as it would lock the world into a high greenhouse gas future.”

In a statement, the American Petroleum Institute said governments and the industry need to work together: “Rising energy costs worldwide and current geopolitical tensions prove it is more important than ever to ensure continued access to affordable, reliable energy while reducing emissions. As populations grow and …read more

Chris Pratt Hypes Up His Mario Voice: ‘Unlike Anything You’ve Heard’

‘Web of Make Believe’: Where Is Tyler Barriss Now?

‘Web of Make Believe: Death, Lies and the Internet’ still shot of a man in a library | Netflix Where is the ‘Web of Make Believe’ subject Tyler Barriss now? The first episode of Netflix’s new six-part true-crime series highlights the dark side of the internet and tells true stories of “depraved internet practices” gone […]

Orioles reset: Which All-Star’s son? Looking at Baltimore’s options for the No. 1 overall pick in the 2022 MLB draft

In little more than a month, the Orioles will replace Adley Rutschman in their farm system with another first overall draft pick. With the new collective bargaining agreement’s draft lottery system not going into effect until next summer, Baltimore’s 52-110 record last year, paired with a tiebreaker against the Arizona Diamondbacks, secured the organization’s second […]