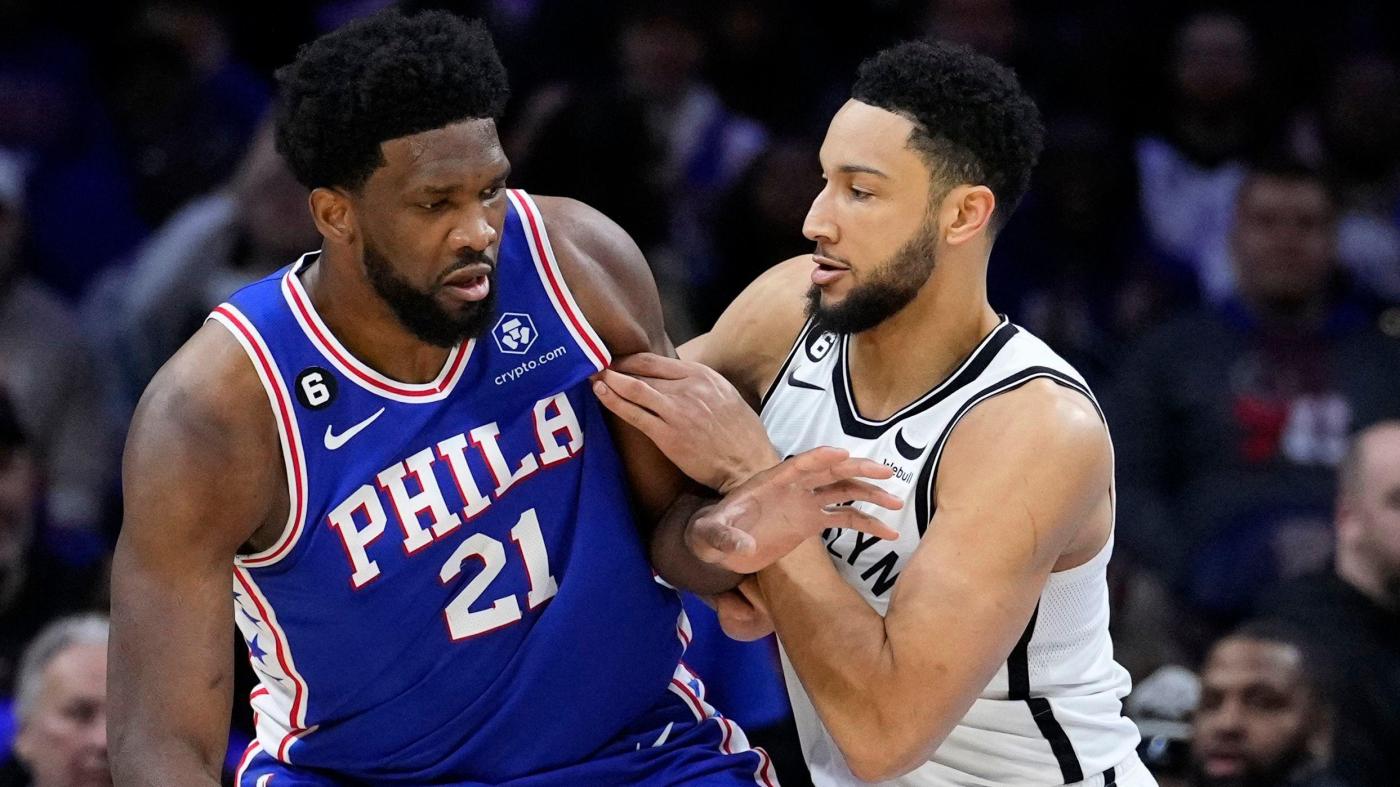 PHILADELPHIA — This is what Jacque Vaughn means when he says Ben Simmons needs to play an entire game with force.

Not just intermittent spurts of aggression when he so chooses.

Simmons went scoreless in the first half of the Nets’ 137-133 loss to the Sixers in his first game against Joel Embiid since last season’s blockbuster James Harden trade at the Wells Fargo Center on Wednesday. He missed his only shot attempt and refused to look at the rim, often passing out of situations where most other players would shoot.

And then a switch flipped.

Simmons decided to hunt his own shot. First, a turnaround hook shot over P.J. Tucker. Then another attempt over Tucker that he left short. Then a pair of free throws when he was fouled on a layup attempt. Followed by a layup under the rim, and then an uncontested alley-oop finish.

Simmons finished the third quarter driving coast-to-coast for an and-one layup with 0.7 seconds left on the clock. After going scoreless with just one shot attempt in the first half, Simmons scored 10 points in the third quarter alone.

And then another switch flipped, this time from Vaughn, who pulled Simmons from the game in favor of sharpshooter Joe Harris at the 8:57 mark of the fourth quarter. When Harris fouled out at the 5:58 mark, Vaughn subbed in Royce O’Neale, who had a particularly poor shooting night, left in Yuta Watanabe, and continued to leave Simmons on the bench for the game’s most critical stretch.

Simmons finished with 12 points, five rebounds and five assists on five-of-seven shooting from the field. After a frustrating and confusing first half, all but two of his points came in the third quarter. Seth Curry scored a game-high 32 points in his return to Philly. Kyrie Irving put up 30 points and 10 assists on 9-of-15 shooting from the field. Nic Claxton added 25 points, 11 rebounds and two blocks in yet another impressive performance for the emerging star center. Watanabe added 11 points off the bench and played every crunch-time minute.

Simmons did not, even though it was his very shift in willingness to score that helped power the Nets back from down 17 points.

By the time Simmons decided to look at the rim, it was too little, too late.

The only time 76ers fans didn’t boo their former star playmaker was when they took the time as a collective unit to laugh at him.

It’s an unfortunate truth, and the elephant in the room for what has been a promising Nets season.

Forty-seven games in, the Nets continue to have a Simmons problem: Their third highest-paid player is inconsistent with his efforts to score the ball, and his struggles stagnate, if not cripple a free-flowing Nets offense.

The silver lining, of course, is that the Nets almost stole a victory against a fully healthy 76ers team, and they did so without Kevin Durant, whose MCL sprain will be reevaluated in another two weeks’ time.

SANTA CLARA — Nick Bosa, who won his first NFL sack title this season, also won the 49ers’ most prestigious honor: the Len Eshmont Award, for inspirational and courageous play. Bosa also won the Matt Hazeltine “Iron Man” Award for being the most courageous and inspirational defensive player this season, which ended with Sunday’s NFC Championship […]

Passengers arrive at Oakland International Airport, December 2022. (Karl Mondon/Bay Area News Group) SAN JOSE — San Jose and Oakland airports both soared to huge gains in passenger activity during 2022 — but trips through the travel hubs nosedived in December amid widespread flight cancellations last month. The upswing in activity at both airports in 2022 […]

Paul McCartney and Ringo Starr | Don Paulsen/Michael Ochs Archives/Getty Images “Rain” was released in 1966 as the The Beatles often experimented with various instruments and recording techniques. Their songs often sound different, partly due to The Beatles’ innovative tendencies. For example, George Harrison often incorporated the sitar into several tracks to generate a surreal […]