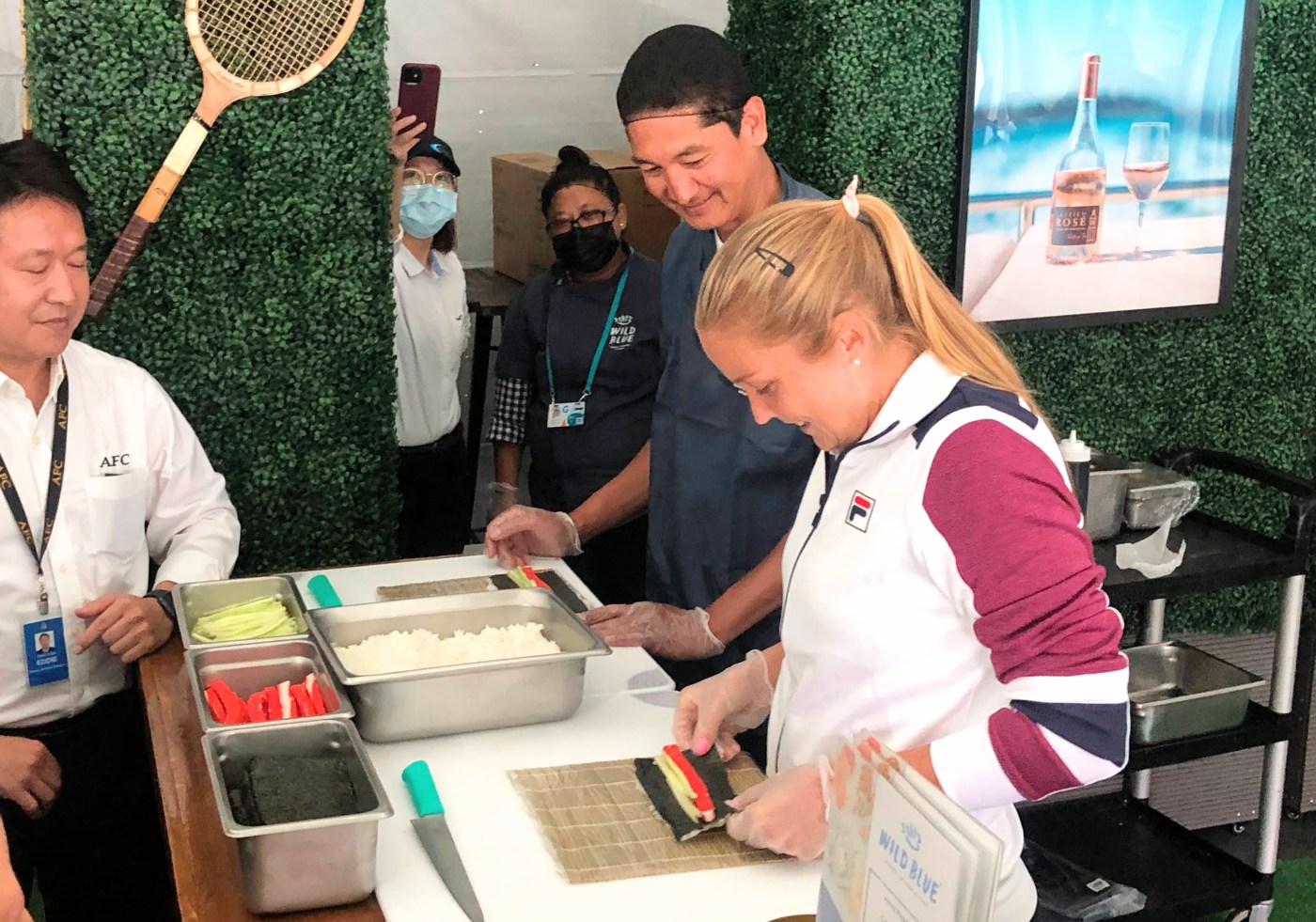 If you’re heading out to the Mubadala Silicon Valley Classic at San Jose State this week, you’ll get the chance to chow down on barbecue, sip a Silicon Valley themed cocktail and play with a bunch of shelter puppies. Oh, and there’s some really good tennis going on, too, thanks to superstars like Naomi Osaka and Bianca Andreescu.

The WTA tournament, which started in 1971 and moved to SJSU in 2018, is playing up the fan experience this year. There’s a spacious outdoor lounge with comfy seats next to the stadium, surrounded by food and drink booths that provide a real taste of the South Bay, too. That’s all thanks to its dining partners and a program headed up by Executive Chef Mario Martinez — who arrived at SJSU about a month ago to take over Spartan Eats — that matches the Bay Area’s international tastes.

The Smoking Pig BBQ is a local favorite in the mix, and owner Paul Reddick was out during qualifying rounds Sunday talking up the pulled pork, pulled chicken and beef brisket “sammies” and nachos. Sadly, the menu lacks the Smoking Pig’s famous “wolf turds” — bacon-wrapped stuffed jalapeños — which Reddick said were too labor-intensive to produce for the tournament. There’s also sushi from Wild Blue Sushi — U.S. player Shelby Rogers practiced rolling sushi at their booth Sunday, as well as Mediterranean dishes by the Halal Shack, and a refreshing-looking cocktail called the Silicon Valley Collins mixed up by the bartenders at the Sipsmith gin booth.

And, yes, there’ll be puppies there, too. The Humane Society Silicon Valley is bringing shelter puppies to the tournament on Friday from 3 to 7 p.m., and some of their alumni dogs will walk the court during the quarterfinal matches that evening. It’s the “tail end” of a home-and-home series after WTA players visited the Humane Society’s animal care shelter in Milpitas on Saturday.

The transformation of the football practice field at CEFCU Stadium into a tennis stadium and adjoining fan lounge is pretty remarkable and really highlights the changes around the South Campus area. You can see new facilities for golf and softball, as well as the progress made on the new east side of the football stadium and the new parking garage that seemed to spring up overnight at the corner of 10th and Alma.

You can get schedule and ticket information for the tournament at www.mubadalasvc.com.

BALLET IN THE PARK: Dancers from around the state who have been training since June at San Jose’s New Ballet School will provide a free summer recital outdoors on Aug. 5 at St. James Park, near North First and St. John streets. The New Ballet School is the only American Ballet Theatre Certified School on the West Coast and its students join New Ballet’s studio dancers for “The San Jose Nutcracker” every December and other shows throughout the year. Bring a lawn chair or blanket for the hourlong performance, which begins at 5 p.m.

Orioles give second-largest crowd of the season reason to roar, beating Pirates, 6-3, for fifth straight win

The wave that rolled around Oriole Park at Camden Yards in the seventh inning Saturday had real force to it. There were no gaps in the flow like there so often has been during Orioles games, only the rise and fall of one of the best crowds in Baltimore this season enjoying what would be […]

Associated Press SACRAMENTO — California Gov. Gavin Newsom has nominated current state Supreme Court Associate Justice Patricia Guerrero as the next chief justice. Guerrero, the court’s first Latina judge, has been on the state Supreme Court since March as an associate justice. She would replace Chief Justice Tani Cantil-Sakauye, who will step down once her […]