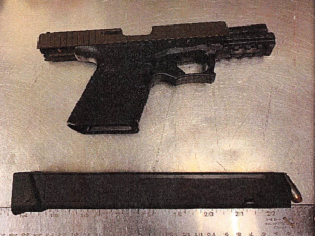 OAKLAND — A Bay Area man was sentenced to three years in federal prison, related to a January 2020 arrest in San Pablo for possessing a loaded, unregistered pistol.

Daniel Andres Scallion-Martinez, 25, was arrested a year ago, shortly after his release from state prison in a 2016 shooting case that stemmed from a San Rafael gang conflict. He faced nearly five years in federal prison, both both prosecutors and defense attorneys agreed to the three-year term. Scallion-Martinez pleaded guilty to being a felon in possession of ammunition Monday morning, shortly before he was sentenced.

Before he was sentenced by U.S. District Judge Haywood Gilliam, Scallion-Martinez apologized in open court. He said he wanted to put his past mistakes behind him and “focus on the future.”

Assistant U.S. Attorney Jonathan Lee, who prosecuted the case, said he agreed to a lesser sentence because of a key factor in Scallion-Martinez’s life: at age 12, his family sent him to live in Mexico, where he joined a Southern California-based gang, Lee said.

“At the age of 12 that’s not a decision he could make on his own,” Lee said, adding that it led to a lifetime of strife for Scallion-Martinez.

Before handing down the sentence, Gilliam said he was concerned by Scallion-Martinez’s history of weapons-related convictions, including the 2016 shooting case — which was motivated by a dispute over gang graffiti, authorities said at the time — and a conviction of possession a weapon in a correctional facility. But he said Scallion-Martinez appeared sincere in his desire to change.

“Wanting to change is one thing. The changing is real hard work,” Gilliam said. He later added, “I can’t snap my fingers and make it happen, but I’m encouraged that you’re willing to take it on and are ready to do it.”

Back in July, Scallion-Martinez’s attorney filed a failed motion arguing that San Pablo police violated his rights when they searched his car based on an anonymous suspicious circumstances report. Prosecutors wrote in their response that the officer could see the gun on the floor of the car.

The California woman accused of an attempted assault on a teenage boy in a Manhattan hotel is also being investigated in connection with damage to the Airbnb apartment where she was staying, the New York Post is reporting. Miya Ponsetto. (Ventura County Sheriff’s Office)  Miya Ponsetto, 22, of Piru (Ventura County) was extradited to New […]

Harriette Cole: I found these old photos, and now I’m mortified by how I look

DEAR HARRIETTE: I’ve been cleaning house, and I came across a bunch of old photos of me and my friends over the past 10 years or so. I have enjoyed recalling the different experiences, but I am also mortified looking at myself. Harriette Cole  I have been working like mad and doing little else, and […]

DeSaulnier: How close we came to losing American democracy

I had a ringside seat for the insurrection last week. To keep me safe during House business because of my recent health battle, I was in a room right across from the House Floor waiting for votes. It had a wonderful view of the National Mall all the way down to the Washington Monument. Rep. […]