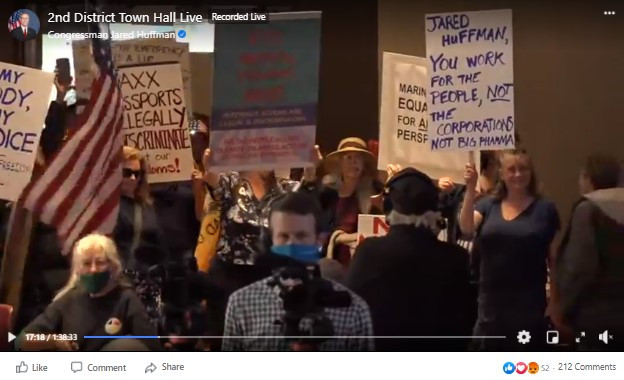 The demonstrators interrupted the meeting about 15 minutes after Huffman, a Democrat whose district includes Marin, opened the forum Tuesday afternoon.

The event, which was livestreamed on Facebook, happened at the San Rafael Community Center. Protesters filed into the room to condemn coronavirus health guidelines with signs that read “medical tyranny is still tyranny,” “Huffman’s vaccine passport violates our rights” and “No medical apartheid.”

The demonstrators surrounded about 100 people who had made reservations to attend. Amid yelling and chanting, one protester seemed to grab at an attendee’s mask, but it did not escalate into violence, said San Rafael police Officer Kaitlin Maley.

“It was mostly peaceful,” said Maley, who estimated that about 200 protesters went in and out of the center during the event. “There was a lot of yelling.”

“There wasn’t any violence and it was more of a dispute of people’s different opinions,” she said. “We did not witness any acts of violence and there were no reported assaults.”

The event was Huffman’s first in-person public forum since the pandemic started last year. He said he was expecting to talk about policy and $24.4 million in federal funding for infrastructure projects.

Instead, he said, he was disappointed that people who were sitting patiently and following the rules were subjected to “bad behavior.”

“I’m sure there were some civil and peaceful individuals in the mix, but the thrust of this group was very physical and very much about bullying their way in and imposing their will on everyone else,” Huffman said Wednesday. “There was pushing and shoving, insulting and screaming. These are things I’ve never seen before at any public event I’ve ever done. It was not OK.”

Still, he said, he asked police to stand down and tried to give the protesters the first question, but they proceeded to jeer. He continued the meeting, yelling over the protesters for much of the 90-minute event.

“There are no good choices in that moment,” he said. “You don’t want to put police in a difficult situation or get heavy-handed in a way that lets them portray themselves as victims of the authoritarian ‘deep state.’ The best we could do is try to muddle through it, and that’s what we did.”

An announcement from Huffman’s office prior to the forum said that “proof of vaccination will be required at the event before entrance for in-person attendance.”

In a social media post on Monday, the Sonoma County Republican Party urged protesters to turn out for the meeting, saying Huffman was “breaking the law” by discriminating against the unvaccinated.

“WE ARE NOW CHARGED WITH BLOWING THE TOP OFF THE LIES!” the post said.

San Rafael police said vaccination was assumed under an honor system and compliance was not enforced.

Despite the demonstration, Huffman said he plans have another in-person forum after the health restrictions are lifted. He did not specify a date.

Giants broadcaster Duane Kuiper announced Monday that he “may be missing a few more Giants broadcasts than usual” after a diagnosis that will require the broadcasting veteran to begin chemotherapy treatments. Kuiper did not announce a specific medical diagnosis, but in a statement released through the club on Monday, he explained that upcoming absences on […]

I continue a series on the loser-on-loser play, one of declarer’s most useful techniques. Today’s deal was sent to me by Gene Benedict of Toledo, Ohio. In a pairs event, South played at four spades. West led the deuce of diamonds, and South diagnosed the lead as a singleton and put up dummy’s ace. He […]

A Fremont teenager is using her resourcefulness and networking skills to provide medical and other supplies to villages in India, where a deadly surge of COVID-19 is sweeping the country. Aishwarya Manga, 17, has teamed up with a local nonprofit and leveraged her connections with friends, family members, young students and corporations to raise about […]