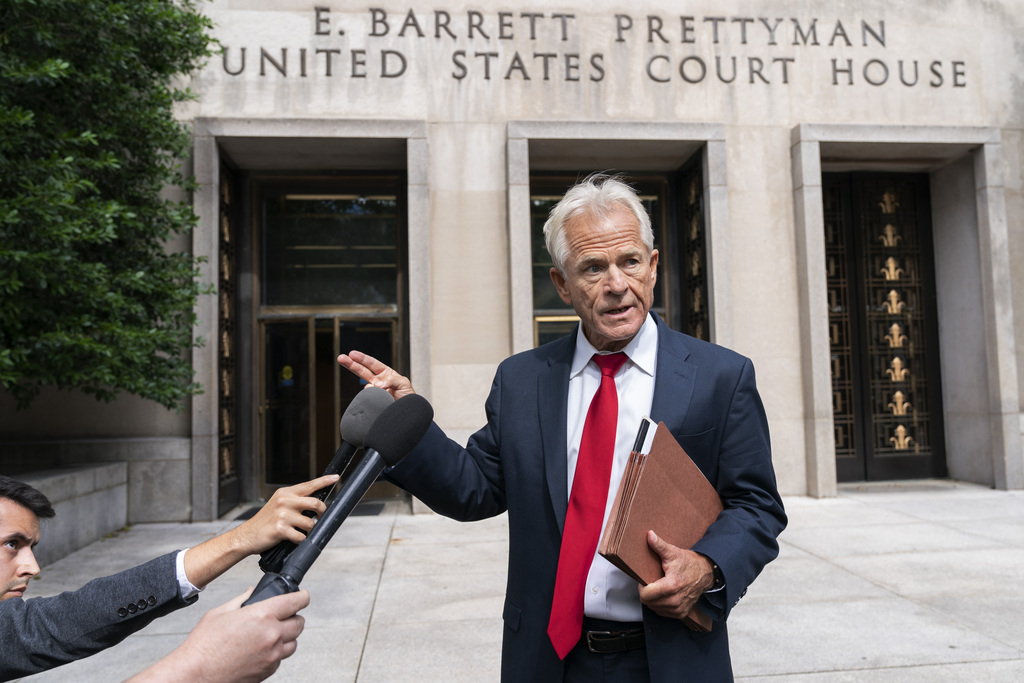 Peter Navarro wasn’t always a sad, whiny insurrectionist. There was a time the former White House trade advisor and Trump henchman was all bright, shiny promise.

In the early 1990s, running as an independent, his good looks drew comparison to Robert Redford and his slow-growth platform nearly got him elected mayor of San Diego.

A few years later, running for Congress as a Democrat, he spoke at the party’s national convention and snagged the endorsement of First Lady Hillary Rodham Clinton, who headed west to bless Navarro’s unsuccessful campaign.

Today, it seems hard to reconcile the nutty former UC Irvine professor who schemed to steal the 2020 election for President Trump with the candidate who inveighed against “fearmongering” politicians and “the extreme right wing of the Republican Party.” Who disparaged Rush Limbaugh and excoriated Pete Wilson’s 1996 presidential bid, saying the former California governor and San Diego mayor hoped “to cynically ride a tidal wave of white male rage and anti-immigration fervor right down the Potomac and into the White House.”

But there is a through-line, say those who have known and observed Navarro for decades: a monumental self-regard, a bottomless hunger for attention — he once showed up for a mayoral campaign event wearing nothing but a Speedo — and an utter lack of grounding principles.

Navarro, 72, has been indicted for refusing to cooperate with the congressional inquiry into the Jan. 6 attack on the Capitol and Trump’s brazen efforts to overturn the will of voters and commandeer the White House.

Investigators would like to know more about Navarro’s interactions with the scheming former president and about Navarro’s so-called Green Bay Sweep, the plan he wrote calling for Vice President Mike Pence to block the Senate from certifying the 2020 election and for Republican-led legislatures to decertify the vote in key battleground states.

Navarro happily blabbed to reporters about his subversive efforts and described them in a book after the election, which the committee noted in the subpoena he chose to ignore.

Lately, however, the armchair mutineer has been reduced to mewling on Fox News and other Trumpaganda media outlets about his treatment by the justice system he sought to subvert — “Who are these people? This is not America” — and grifting appeals for money to help bail him out of his legal jam.

“This is going to cost half a million dollars, from what I’m being told,” he moaned. “I’ll be eating dog food if I stay out of jail.”

Navarro’s entry into San Diego politics came through his leadership of Prevent Los Angelization Now, an environmentalist group that tapped into the city’s abiding antagonism toward its sprawling northern neighbor. The economics professor parlayed his high profile and preservationist bona fides into a first-place finish in the crowded 1992 mayoral race, then narrowly lost a runoff as developers and other moneyed interests got behind his Republican opponent, Susan Golding.

Navarro passed through a revolving door of party allegiances, alternately identifying himself as Republican, Democrat and independent. Over the course of a decade, he ran …read more

BTS: RM Wants ‘to Find Inspiration From People Around the World’

On June 14, Jin, Suga, J-Hope, RM, Jimin, V, and Jungkook of BTS announced they will be shifting their focus to solo music projects. In the past, the seven artists have primarily focused on releasing music as a septet. In a new interview with Weverse Magazine, RM of BTS shared how he is spending his time and revealed […]

Maddie Ziegler | Jeff Vespa/WireImage Maddie Ziegler started collaborating with Sia at a young age Ziegler was only 12 when her now-godmother, Sia, At 19, Maddie Ziegler is making a name for herself in the entertainment industry that is independent of anyone else. The actor has been famous for years, but for a long time, […]