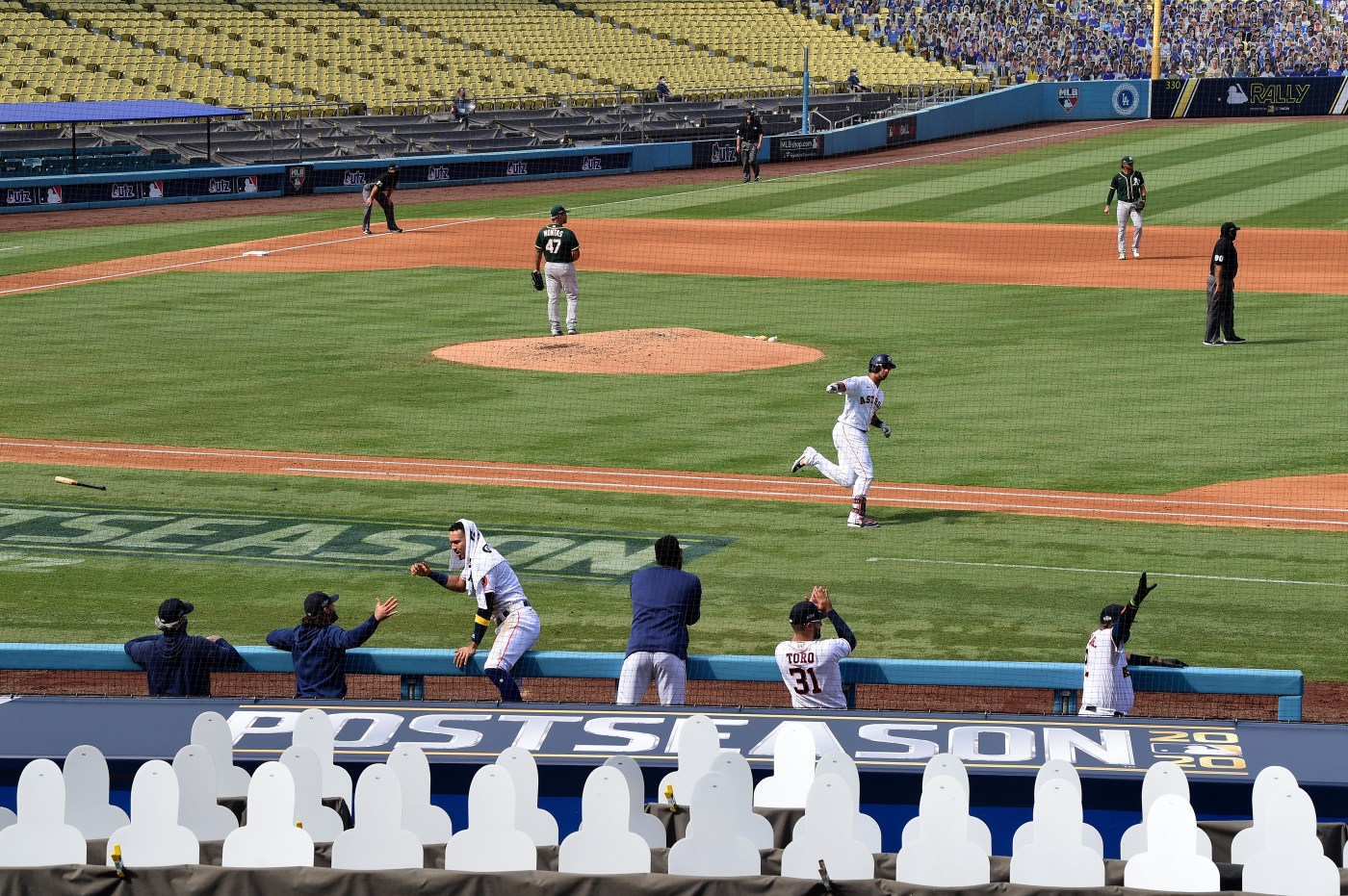 The Athletics’ 2020 season is over after losing Game 4 of the American League Divisional Series to the division rival Houston Astros.

In a home run-filled series at Dodger Stadium, the A’s pitching — starters and relievers alike — just could not hold up against the Astros’ big-name lineup.

Here’s what both teams are saying after the Astros closed out the series:

On not taking pitching changes: “I’m fine, I just had a little foot thing pop up during batting practice so I didn’t want to limp out there, limp back and take a bunch of time.”

“We couldn’t hold them down. Ramon’s home run felt like a 1,000-run home run the time. We felt really good about where we were going.”

“We battled to the end as you would expect, just not enough.”

On bullpen: “You look at the numbers over the course of the regular season with our bullpen, we had a lead after the sixth, we usually won. It didn’t happen this series and we struggled to hold them down really the entire game at times. Just a good offensive team that hit their stride at the right time.”

“When Oly hit it, I didn’t think it was going that far. He caught it two-handed, he’s a great defender, but I don’t think it took any wind out of our sails.”

“I don’t think we were thinking about their experience, it is an experienced team that has played well for years now.”

On the game’s momentum: “You knew to an extent there was never anything to be a lead that felt like it was too big. I’m shocked Marcus’ ball didn’t go out.”

On Semien’s warning-track out: “Every ball that was hit like that at 100 miles per hour. That one didn’t. If there was ever a momentum swing, that was the biggest one.”

On his staff’s short outings: “I think in the postseason you tend to go to your bullpen a little bit earlier anyway when you have it as strength.”

On the pandemic season: “It’s not like there was a point during the season that you forgot about it. It was always a bit of a struggle for every team. As far as getting used to it, I don’t know, it seemed like there were different hurdles to try to get over.”

“60 games felt more like a regular season, but even playing field for everybody. Our reflection is our goals were loft and we felt short of them.”

On Semien’s pending free agency: “You get kind of lost in the moment. It doesn’t surprise you that he put together a great at-bat in the shadows, with two outs …read more

Coronavirus: How it compares to the flu and where to get flu vaccines

As the U.S. continues to battle the coronavirus, a new flu season is about to start. The flu and the coronavirus have a lot in common, especially considering that people older than 65 are most at risk of getting a severe respiratory infection. According to the CDC COVID-19 dashboard, the case-fatality ratio of COVID-19 in […]

By Steve Holland | Reuters Thursday’s debate between President Donald Trump and Democratic challenger Joe Biden will feature a mute button to allow each candidate to speak uninterrupted, organizers said on Monday, in an effort to avoid the disruptions that marred the first matchup. The Presidential Commission on Debates said each candidate’s microphone would be […]

Bob Melvin reflects on ALDS loss to Astros: ‘We ran into a buzzsaw’

The Oakland A’s are on the other end of a third straight postseason exit after losing in four games to the Houston Astros in the American League Divisional Series. The Astros flipped the script against the A’s at Dodger Stadium. The same A’s team that took seven of 10 games in the regular season from […]