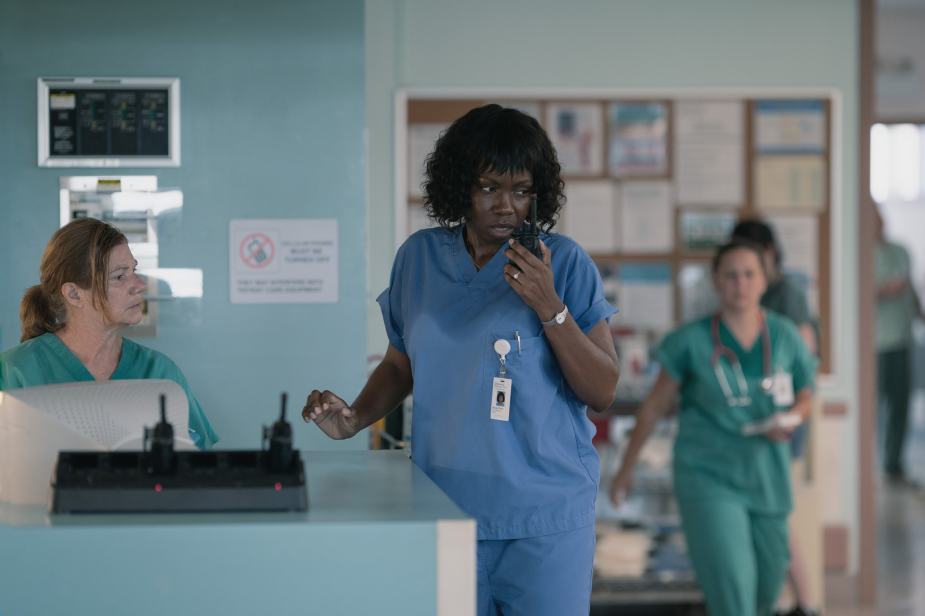 Carlton Cuse and John Ridley stopped at nothing to recreate the scenes at Memorial Hospital during Hurricane Katrina, and Apple TV+ gave them all the resources to create a heart-wrenching masterpiece in Five Days at Memorial. Hurricane Katrina struck the Gulf Coast 17 years ago, but the emotions came flooding back within moments in the opening scenes of Five Days at Memorial. The timeliness is at the forefront of the story — like the COVID-19 pandemic. How do doctors and nurses choose who gets care and who gets rescued when supplies are limited? Showbiz Cheat Sheet spoke with director Carlton Cuse and actor Adepero Oduye ahead of release of Five Days at Memorial for this review.

Apple TV+’s Five Days at Memorial tackles social and racial issues that America is still facing today. Cuse and Ridley use footage from the time and then recreate precisely what happened at one hospital that left 45 patients dead in only five days. They tell the story and then leave it to viewers to grapple with the unresolved questions. How could something this catastrophic happen in one of the wealthiest countries in the world?

No cost was too much to show the heartache the doctors, nurses, and patients endured in the days following Katrina’s landfall in New Orleans, Louisiana. They built a four million gallon water tank to recreate a hurricane and flew a U.S. Coast Guard helicopter across the Canadian border during a pandemic.

It all came together to make one cataclysmic point — the socioeconomic issues plaguing this country haven’t changed in 17 years. Those who were hit hardest during Hurricane Katrina were hit again when the coronavirus struck the country. The actors and producers hope the series encourages viewers to talk about all of the issues they bring to light. Adepero Oduye, who portrays nurse manager Karen Wynn hopes that the conversations lead to solutions so that “we don’t we don’t repeat this again.”

“I’m very proud that the story was handled with care and tenderness,” The Falcon and The Winter Soldier star reflected on the 8-part miniseries. “I don’t think we’re telling people how to feel about anything. We’re just showing you as best we can what this story was like for these people.”

In Five Days at Memorial, the scene switches from the devastating scene in New Orleans to three men having lunch on a golf course. Viewers find out the importance of Michael Arvin’s role later. However, the disparity between the horrific scene in the hospital and the sumptuous lunch at the country club is enough to show the contrast.

The three upper-class white men discuss whether an event like Hurricane Katrina is “good for business.” Meanwhile, the predominantly poor and Black people of New Orleans fight for their lives while their homes are destroyed.

At one point, firefighters stood around for an entire …read more

Tom Brady had the type of look on his face that screamed: “I need to speak to a manager.” The Tampa Bay Buccaneers quarterback, a future first-ballot Hall of Famer who is in the discussion when it comes to the greatest quarterbacks of all time, stomped off the field following a third-down pass he was […]

Harriette Cole: Meeting these awful women made me doubt my own best friend

DEAR HARRIETTE: My best friend is one of the sweetest people I’ve ever met. She recently introduced me to her other friends, and I was surprised to find out that they’re pretty much a group of bullies. They don’t seem like very good people at all. We hung out with them for about three hours, […]

Julia Roberts is an established actor who has been in several hit films. Meanwhile, fans know Kiefer Sutherland best for his role in the show 24. And their brief celebrity relationship is one that some people still talk about today.  The pair planned to get married in the early ’90s, but the news of their canceled engagement shocked fans. […]