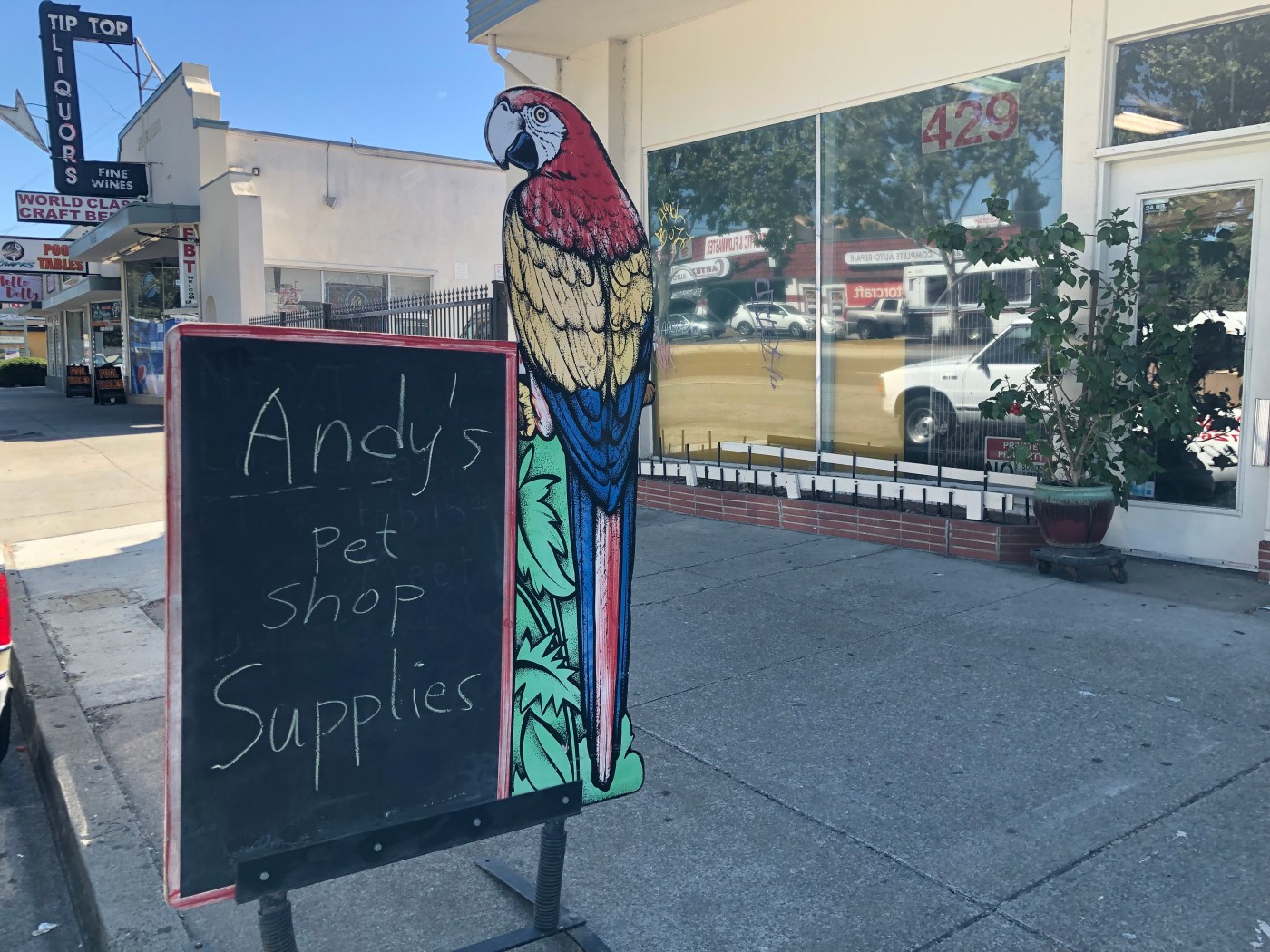 Drivers headed through downtown San Jose to Highway 87 may have noticed something alarming recently: Andy’s Pet Shop on Notre Dame Avenue is locked up and emptied out.

Fear not, though, as the beloved institution, which first opened on The Alameda in 1950, has simply changed locations again after about a decade downtown. Known for its iconic neon sign featuring a red-yellow-and-blue macaw, Andy’s has left its roost at 51 Notre Dame Ave.– slated to become a mixed-use tower project called the Carlysle — and landed at 429 South Bascom Ave., near West San Carlos Street.

Lissa Shoun and her husband, Eric Bong, took over Andy’s in 2007 and moved it from its original home on The Alameda in 2010 after a disastrous financial year during the Great Recession. Fans followed the shop for pet supplies and treats, and in recent years it also had become a reliable pet rescue adoption center.

The small storefront on Bascom Avenue — between a medical supply company and Tip Top Liquors — is considered a short-term home while funds are raised for a larger space that can accommodate the adoption center.

Wherever Andy’s ends up, let’s hope there’s space to reinstall the classic sign, too.

LIVE FROM SAN JOSE: The Mission Chamber Orchestra is making a return to live performance this weekend at a fitting and beautiful venue, Five Wounds Portuguese National Church in San Jose. Music Director Emily Ray says the 3 p.m. concert on Sunday will feature chamber works by Portuguese and Azorean composers.

The 60-minute concert is free, but social distancing is being ensured by limited attendance to 300 people, who are required to wear masks. You can reserve a ticket at www.missionchamber.org. For those who can’t make it in person or prefer to watch from an even greater distance, the concert also will be livestreamed at www.facebook.com/FiveWoundsPortugueseNationalChurch.

CAMPBELL SCRAMBLE: As shops and restaurants reopen or increase capacity, headlines have decried a shortage of employees in lots of places. That seems to be the case as well in Campbell, which is working to revive its bustling downtown dining scene as COVID-19 restrictions are eased.

Christmas in the Park getting even bigger for 2021

South Bay movie theaters are back, but where are the audiences?

To help keep things going, the Campbell City Council recently voted to allow existing parklets — that’s the outdoor curbside seating being used by restaurants to increase capacity — to remain through Sept. 30. And the Campbell Chamber of Commerce is hosting a daylong …read more

Submit your letter to the editor via this form. Read more Letters to the Editor. A’s can’t put a price on their die-hard fans I’m writing this letter in response to “Oakland Must Prevent Tragedy of Losing A’s” in the May 28 Letters to the Editor (Page A8). Our Raiders have already been taken from […]

Submit your letter to the editor via this form. Read more Letters to the Editor. State should revisit deactivating nuke plants Reader Bob Greene is right on (“Cutting edge reactors route to green future,” Letters to the Editor, Page A12, June 6). Molten salt reactor technology dates back 60 years and is now being revived […]