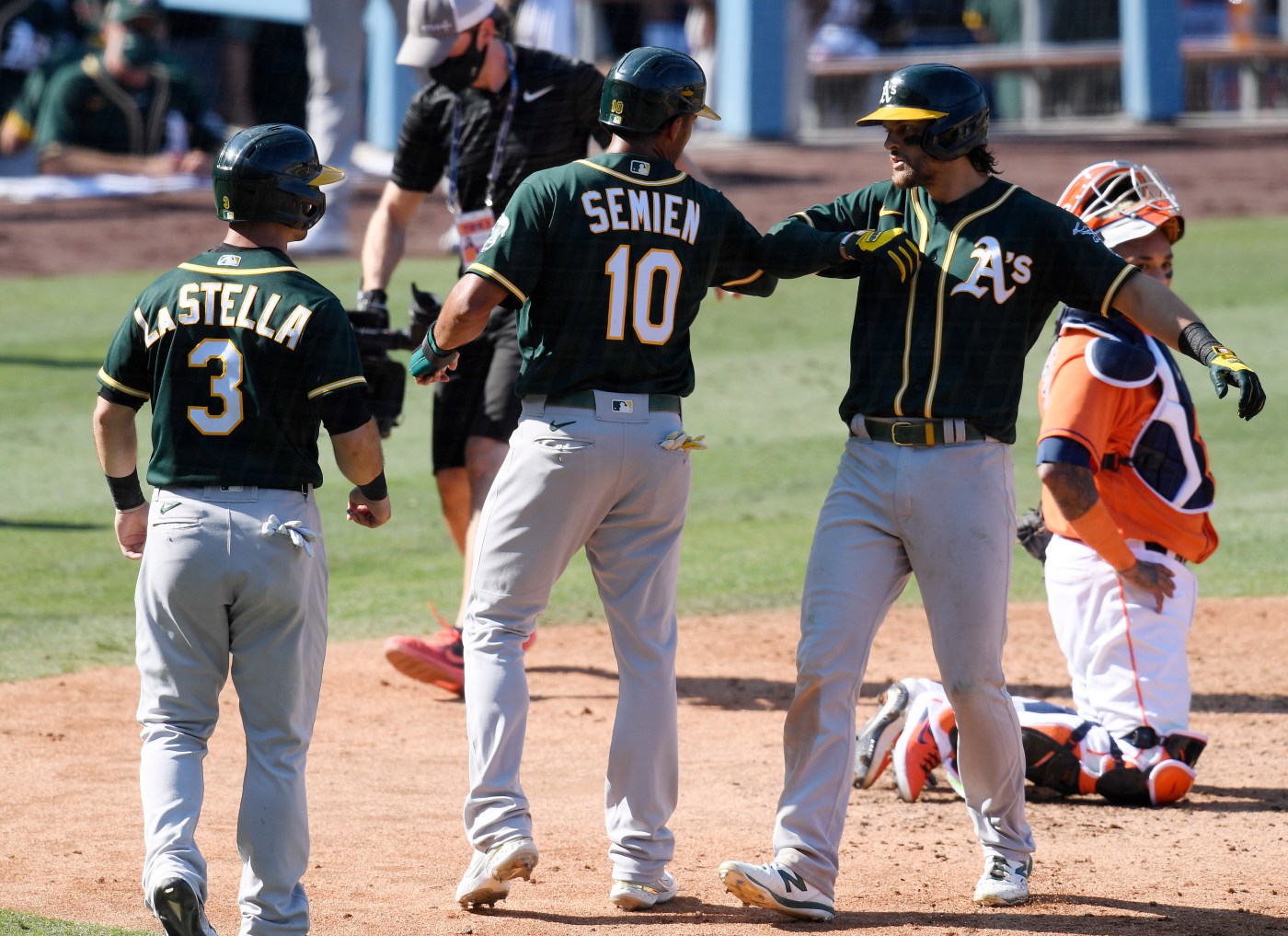 Game 3 of the ALDS saw three dramatic lead changes, but the A’s kept their season alive with a 9-7 win over the Houston Astros.

Chad Pinder’s 360-foot blast in the seventh was the shortest of them all, but was by far the most impactful. The three-run homer erased an Astros’ 7-4 lead late and shifted the momentum.

The offensive flow rode again on another Home Run Derby, with both sides upping the count to 18 total long balls at Dodger Stadium in these three games.

The A’s took an early lead with four solo blasts. Tommy La Stella got the A’s out to an early 1-0 lead in the first.

Oakland could feast a little on José Urquidy, who was hanging his breaking balls. Mark Canha, Matt Olson and Marcus Semien notched solo home runs to extend the A’s lead to 4-2.

The incremental lead gathered via solo home run was easily squashed with one big inning. Jesús Luzardo had been rolling. Getting ahead in counts, he held the Astros scoreless through three innings.

It started with a leadoff walk to Yuli Gurriel in the fifth inning. Aledmys Diaz worked back from an 0-2 count and nailed a fastball over the left field fence to tie the game 4-4. With reliever Yusmeiro Petit on the mound, Houston taught the A’s a lesson in hitting with runners in scoring position, stringing together four hits from the heart of the order for a 7-4 lead.

The comeback A’s, capable of reclaiming unlikely leads late, gave way to the comeback Astros. It was a snapshot for how this series has gone for the A’s: Petit allowed four earned runs in 21 2/3 innings during the regular season. Houston put up four against him in one inning this series, including three Wednesday.

The bullpen just couldn’t mask the offensive deficiencies much longer. The A’s had their opportunities to bust the game open in their favor.

What the Athletics and Astros are saying before ALDS Game 3

Oakland A’s remain confident on brink of elimination: ‘This team thrives on situations like this’

After Semien’s home run in the fourth, Oakland loaded the bases with a walk and Chad Pinder’s single — the A’s …read more

Report: Great Barrier Reef lost half its corals in 3 decades

By Amy Woodyatt | CNN Australia’s Great Barrier Reef has lost 50% of its coral populations in the last three decades, with climate change a key driver of reef disturbance, a new study has found. Researchers from the ARC Centre of Excellence for Coral Reef Studies, in Queensland, northeastern Australia, assessed coral communities and their […]

By DENISE LAVOIE | The Associated Press RICHMOND — A wild animal trainer featured in the popular “Tiger King” series on Netflix has been indicted in Virginia on animal cruelty and wildlife trafficking charges. Attorney General Mark Herring said Friday that a months-long investigation found that Bhagavan “Doc” Antle and the owner of a roadside […]

By TERESA M. WALKER and BARRY WILNER / AP Pro Football Writers The Bills-Titans game has been moved from Sunday to Tuesday night at 4 p.m. PT as long as Tennessee has no more positive tests for COVID-19 in the interim. CBS will televise the game. The NFL also is rescheduling Sunday’s Broncos-Patriots game from […]