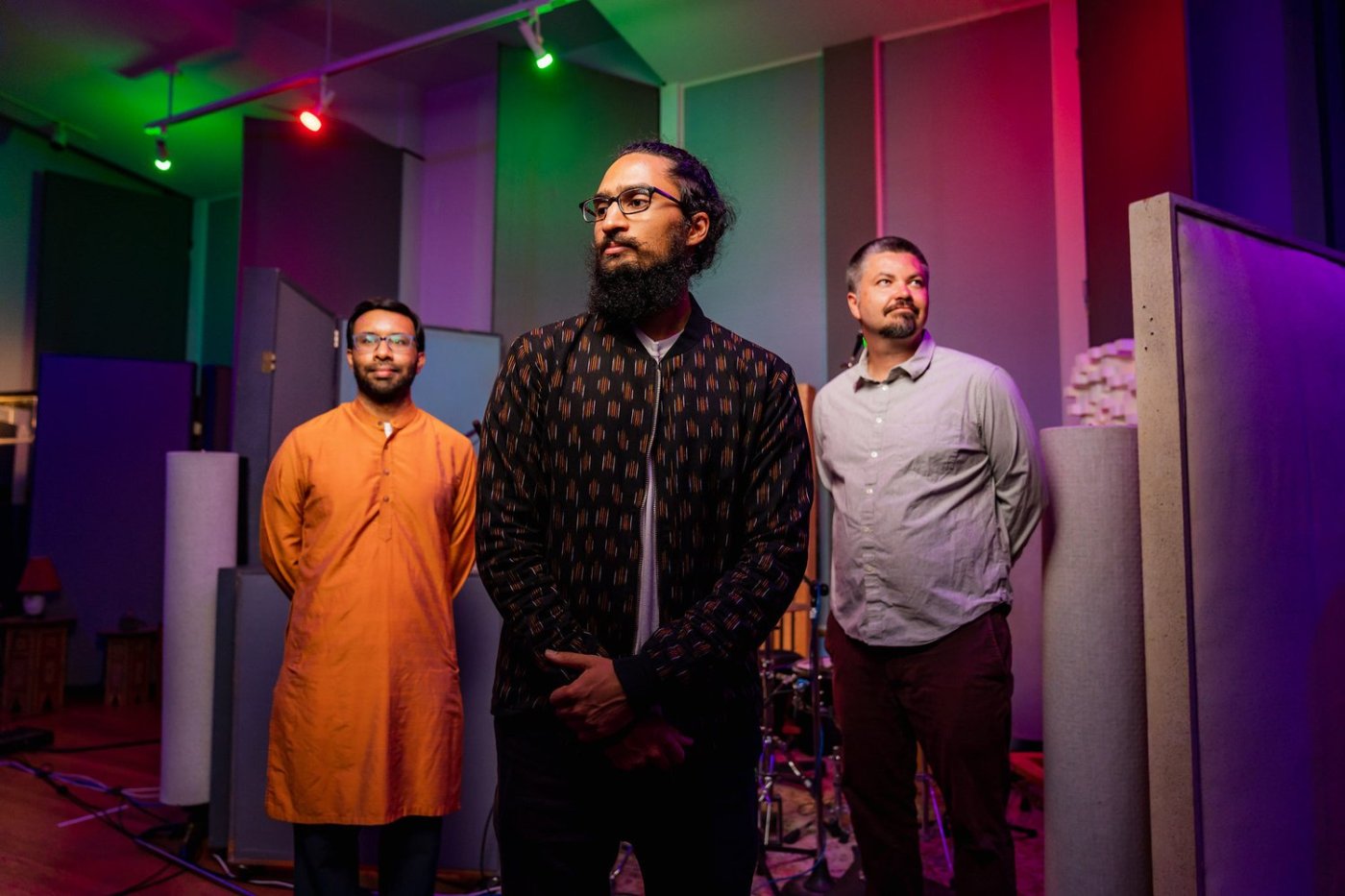 Friends and musical collaborators since middle school, Rohan Krishnamurthy and Prasant Radhakrishnan had talked for years about creating a band that could bring together their love of jazz and their deep training in South Indian classical music. When they launched the Alaya Project in 2017 it was the Beatles who finally brought the stars into alignment.

An East Bay musician who combines the drum kit and Carnatic hand percussion, Krishnamurthy realized a golden opportunity had dropped into his lap with an invitation to join an UnderCover Presents production celebrating the 50th anniversary of “Sgt. Pepper’s Lonely Hearts Club Band” at Berkeley’s UC Theatre.

With each act interpreting one track from the classic album, he figured the obvious choice would be George Harrison’s sitar-driven “Within You Without You.” Instead, UnderCover Presents producer Lyz Luke tapped him to reimagine “Being for the Benefit of Mr. Kite!,” a challenge he knew would intrigue Radhakrishnan, an alto saxophonist who’d spent years melding jazz improvisation and classical Carnatic forms.

“I immediately hit up Prasant,” said Krishnamurthy, 35, from his home in Dublin. “Let’s give this a shot. I was really hearing accordion for the tune, too, and that’s when I hit up Colin Hogan, a Bay Area heavyweight. I’d known him through the scene, but the first time we came together was for ‘Mr. Kite.’ I like to tell people that at heart the Alaya Project is actually a Beatles cover band.”

The trio included the enthralling arrangement of “Mr. Kite” on their eponymous debut album released last month on Bandcamp, but most Alaya Project pieces are originals exploring musical territory they’ve designed to intermingle Carnatic ragas with African American musical idioms. Celebrating the release of “The Alaya Project” Sept. 23 as part of the Hammer Theater’s Sunset Series, the group will be joined by special guest Roopa Mahadevan, a New York-based classical Indian vocalist known for her work in jazz, R&B, soul and world music settings.

Krishnamurthy kicks off the fall concert season with a duo recital 5 p.m. Sept. 18 at Chabot College with Vishnu Ramaprasad on navtar, a redesigned guitar that can navigate microtonal intervals.

The pair first joined forces last month in San Francisco for a performance at Old First Concerts, “but I’ve known his parents for a long time,” Krishnamurthy said. “Vishnu’s father is a well-known Carnatic singer in India, and his mom is a well-known dancer. We just connected recently and he plays this really interesting souped-up guitar with sympathetic strings.”

Part of what makes the Alaya Project such rich creative exchange is that it expands on a conversation that Krishnamurthy and Radhakrishnan started as children of Indian immigrants. Krishnamurthy grew up mostly in southwest Michigan while Radhakrishnan hails from Phoenix. They first met in 1997 while attending the Cleveland Thyagaraja Festival, the largest Carnatic music festival outside of …read more

A new docuseries on Netflix called The Real Bling Ring: Hollywood Heist hits the streaming platform on Sept. 21, 2022. The three-episode documentary takes a deep dive into the crime spree of several teens and young adults as they targeted celebrities homes in Hollywood. Alexis Neiers, one of the main players in the Bling Ring, […]

CELEBRITIES BORN ON THIS DAY: Prince Harry, 38; Ben Schwartz, 41; Marisa Ramirez, 45; Tommy Lee Jones, 76. Happy Birthday: Put your energy where it counts. Consider your options, skills, qualifications and what excites you the most and head in that direction. This year’s adjustments will shape your future and encourage you to fill up […]

Magic training camp countdown: Where do they stand healthwise?

With the 2022-23 NBA season approaching, the Orlando Sentinel is unveiling a five-part series of Orlando Magic storylines to keep an eye on heading into training camp, which kicks off on Sept. 27 at their new state-of-the-art AdventHealth Training Center. Part one addressed whether the Magic did enough to turn around their shooting woes. Part […]