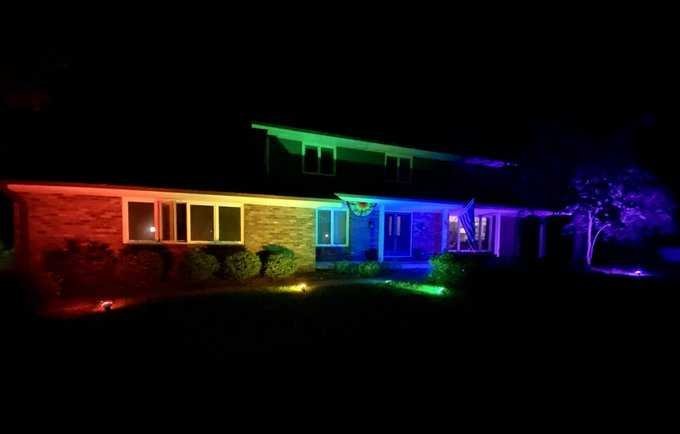 By Caroline Reinwald | WISN via CNN

WIND POINT, Wisconsin – A Wind Point couple got creative with their Pride decorations after their neighborhood association told them they had to take down their Pride flag.

Memo Fachino and Lance Mier live at the end of a quiet cul-de-sac in Wind Point.

Fachino said they put the Pride flag up in March, but recently, someone reported it to the neighborhood association.

The rules in their neighborhood changed within the last month.

Now, the only flag that’s allowed to be flown on a pole outside a single-family home is the American flag.

He sits on the neighborhood association board.

“The political environment was a little bit more charged and there were some flags that were being flown that were opposite in terms of neighbors,” Fachino said. “There were some discussions on frictions between them.”

Fachino said while he did not agree with the flag rule, he understood why it was instituted.

When a neighbor reported their Pride flag to the neighborhood association this month, the association told Fachino and Mier to take it down.

The couple took it all in stride and came up with a creative way to show their Pride colors, by shining rainbow floodlights across their entire house.

“We always said we believe in diversity and representation, so we wanted to follow that same sentiment while being within the rules and being respectful of our guidelines,” Fachino said.

Bunting flags are also allowed, so the couple also kept up their rainbow Pride bunting flag along with the lights.

“If we can’t fly the flag, we’ll find a different way to still show that representation and we just happened to do it through our floodlights,” Mier said.

He said he was surprised by all the attention it got, but happy to be able to provide an example of how other LGBTQ community members can show their Pride colors.

“Representation matters and diversity matters and if you can find a way to make that work in a way that’s not aggressive and not imposed on anyone,” Fachino said. “Our lights don’t hit anyone’s home, they’re not loud, they’re only up three hours a day. It’s not a crazy busy intersection where everyone is forced to see them. We like it as a pretty light approach.”

Frameline 2021: Here’s what to see at huge LGBTQ film fest

Throughout much of the COVID-19 pandemic, health experts widely assumed the new coronavirus that has killed at least 3.7 million people worldwide got passed from an infected animal to humans, either in the animal’s natural environment or at a wildlife market. Now they’re revisiting whether the virus known as SARS-CoV-2 that emerged in the Chinese […]

This upcoming weekend, don’t go looking for the Giants’ games against the Phillies on your Bay Area cable TV package. No, NBC Sports is going to do a bit of an experiment. And baseball fans are the subjects. NBCUniversal, which broadcasts both the Giants and Phillies games on their regional sports networks in the Bay […]