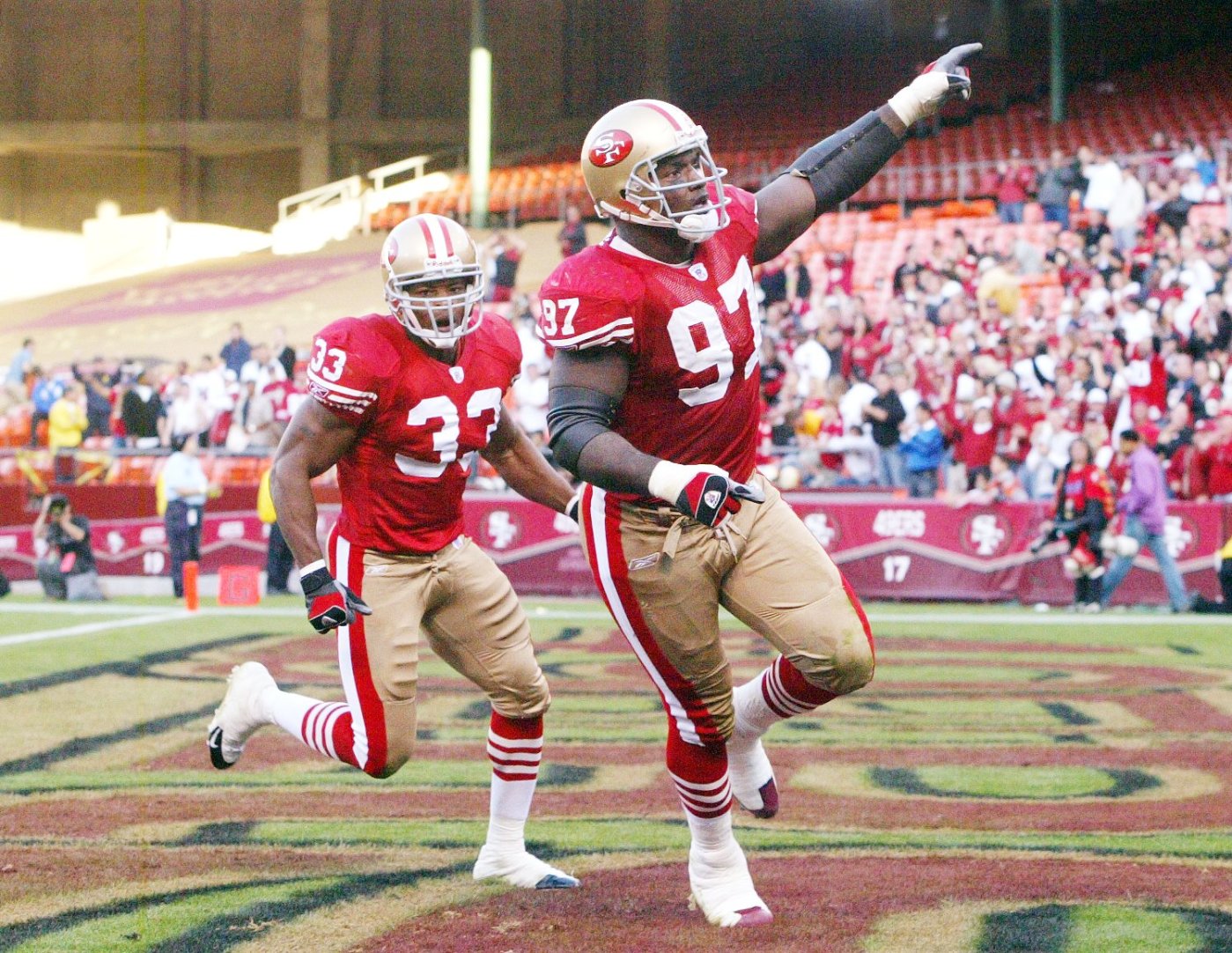 Inside the stadium’s auditorium, coach Kyle Shanahan gave his own tribute in a pre-practice press conference.

“I love B.Y. and I was a ballboy when he got drafted,” Shanahan began. “Talk about a rookie who comes in and doesn’t act as a rookie. That guy was a man from Day 1.”

Young spent his entire 14-year career as a 49ers defensive lineman and remains the franchise’s all-time sack leader. He won a Super Bowl as a rookie, and Shanahan fondly recalled the star-studded roster from that 1994 camp, adding: “That was as cool a thing to be around as I can remember.”

Assuming the 49ers will be practicing during Young’s enshrinement speech in Canton, Ohio, Shanahan said he’d replay it for his team in tribute to the eight-time winner of the 49ers’ most prestigious honor, the Len Eshmont Award. Shanahan noted he tried to hire Young onto his staff a few years ago “and the situation wasn’t right at the time.”

“B.Y. is deserving as a player and one of the most impressive people, too,” Shanahan said.

Asked what other player he’s come across has been “a man from Day 1,” Shanahan didn’t hesitate to say Nick Bosa, the 49ers’ fourth-year defensive end who happens to wear No. 97, Young’s former number. “Bosa’s been a professional since 3 years old,” Shanahan quipped.

As he strolled down memory lane, Shanahan shared a funny tale about that 1994 camp in Rocklin, when he was a 14-year-old ballboy and his dad, Mike, was the offensive coordinator.

Shanahan’s tale: “Richard Dent gave one of the rookie receivers a golf club for some fishing derby, he dropped the golf club, it went in the lake, and he offered someone $200 if they’d go find it. So the next day I went over with goggles and shoes, went swimming in a nasty lake, got that golf club and that $200. It was awesome.”

Cornerback Jason Verrett has been spotted running extremely well in his comeback from last season’s knee injury. How much longer might he remain on the physically unable to perform list?

Shanahan said the 49ers brought Verrett “back a hair too early” in 2019 from his previous season’s Achilles tear. “We definitely don’t want to do anything too soon and we want to give him time to get back to being Jason,” Shanahan said.

Demi Lovato | RB/Bauer-Griffin/GC Images Demi Lovato wants to work with Courtney Love and Hayley Williams Lovato has an impressive body of work as they have put out hit singles such as “Heart Attack” and “Up.” Lovato began acting on Barney & Friends in 2002. Lovato got her breakthrough role by appearing in two Disney […]

Cheryl Burke on Tyra Banks Hosting ‘Dancing with the Stars’: ‘It’s Important We See These Changes’

Tyra Banks | Eric McCandless/ABC via Getty Images Tom Bergeron had several ‘Dancing with the Stars’ co-hosts before Tyra Banks took over Bergeron was the original host of Dancing with the Stars, which debut in 2005. He was initially paired with Lisa Canning, then Samantha Harris stood alongside him as co-host from 2002 to 2009. Then, […]

‘Come on Over,’ ‘Thriller,’ and the Other 10 Albums That Have Sold More Than 20 Million Copies

History holds plenty of chart-topping, record-breaking artists. Regarding album sales, only a few collections earned their certified platinum status. Thanks to streaming platforms and the shift away from physical albums, it became even more challenging for an artist (or group) to reach that milestone.  According to Insider and information from the RIAA, only a handful […]