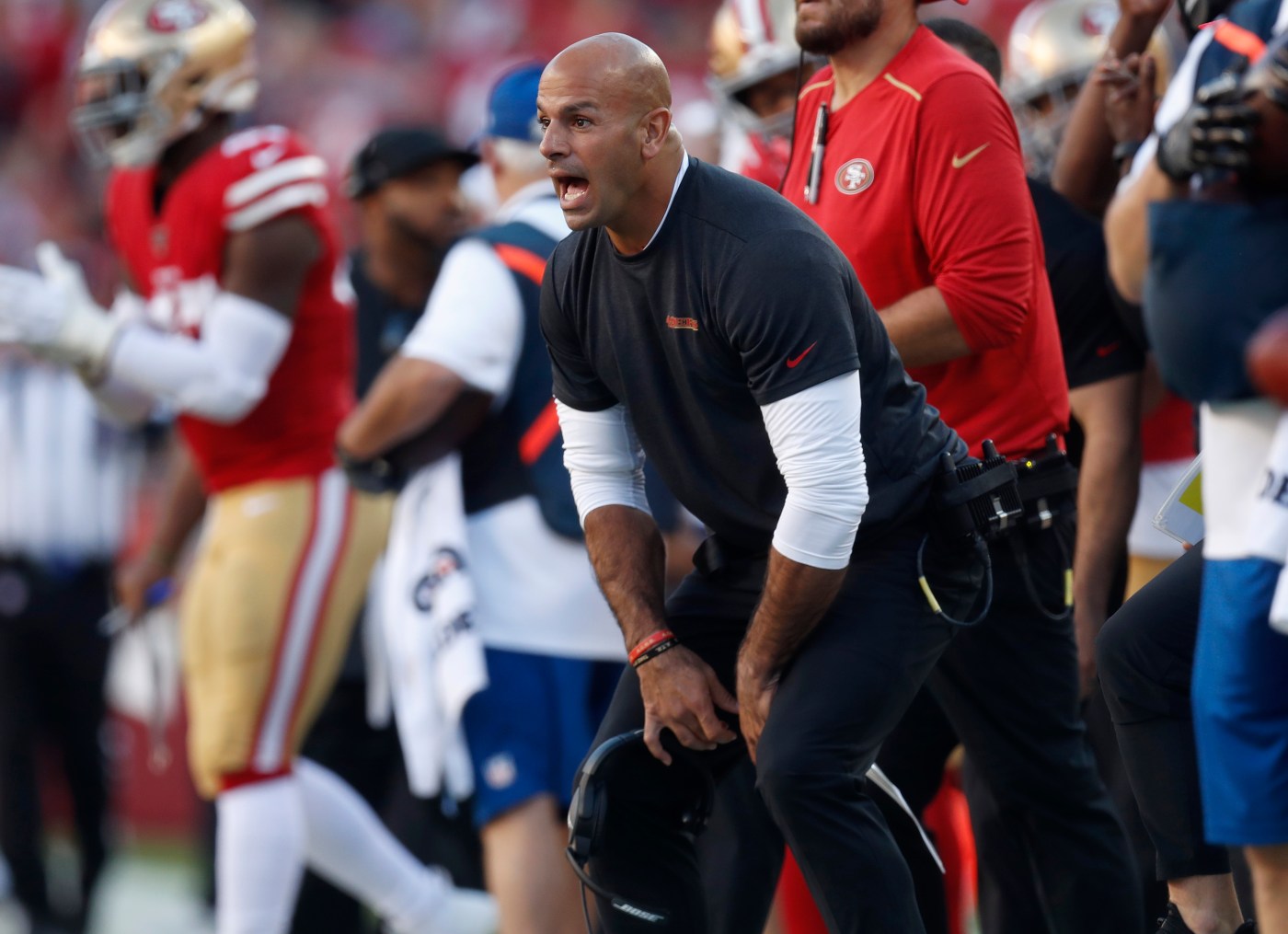 The Robert Saleh head coaching carousel continued to spin Wednesday as the 49ers defensive coordinator reportedly made the short trip to Philadelphia to speak with the Eagles immediately after his second interview with the Jets.

Saleh, who has now spoken with six of the seven NFL teams seeking new head coaches, was the first finalist for the Jets job to get a second interview. However, considering he left the team’s New Jersey headquarters without the job, there’s no way to know if he’s any closer to leaving the 49ers.

Saleh, though, remains in the running to become the next head coach with the Lions, Jaguars, Chargers or Falcons.

Kurtenbach: 49ers have to drop Garoppolo to compete for Super Bowl rings

Meanwhile, Adam Peters, the 49ers vice president of player personnel, is now one of four finalists for the Carolina Panthers’ vacant general manager’s job. The Panthers, who say they’ll make a choice sometime this week, have narrowed their original list of 15 candidates to Peters, Monti Ossenfort of the Titans, Ryan Poles of the Chiefs and the Seahawks’ Scott Fitterer.

There’s also a chance the 49ers could lose veteran executive Martin Mayhew, the team’s other VP of player personnel. The Washington Football Team has requested permission from the 49ers to interview Mayhew for their general manager job, according to The Washington Post’s Nicki Jhabvala.

Losing both Peters and Mayhew, who have been 49ers general manager John Lynch’s right-hand men, would be a blow to the 49ers front office. But since Saleh and Mayhew are minorities, the 49ers would recoup some draft pick compensation should they be hired elsewhere.

In order to encourage the hiring of more minorities in leadership roles, the NFL and its players association passed a rule providing teams that lose a minority coach or executive with a third-round draft pick for two straight years. Should a team lose both a minority coach and executive in the same off-season, the team would be awarded third-round picks in three consecutive years.

A two-alarm fire early Thursday at a two-story house in Pinole did not cause any injuries to the residents or animals living there but did do extensive damage to the home, a fire official said. All of the residents at the house in the 1900 block of Galbreth Road were outside by the time firefighters […]

Associated Press BEIJING — China’s Foreign Ministry described outgoing U.S. Secretary of State Mike Pompeo on Wednesday as a “doomsday clown” and said his designation of China as a perpetrator of genocide and crimes against humanity was merely “a piece of wastepaper.” The allegations of abuses against Muslim minority groups in China’s Xinjiang region are […]

After a hiatus last year necessitated by the pandemic, West Valley Community Services has moved Chefs of Compassion online. The 10th annual fundraiser is set for March 5. The event highlights the Cupertino-based nonprofit’s food pantry, which allows clients to “shop” for what they need to keep themselves and their families fed. For Chefs of […]