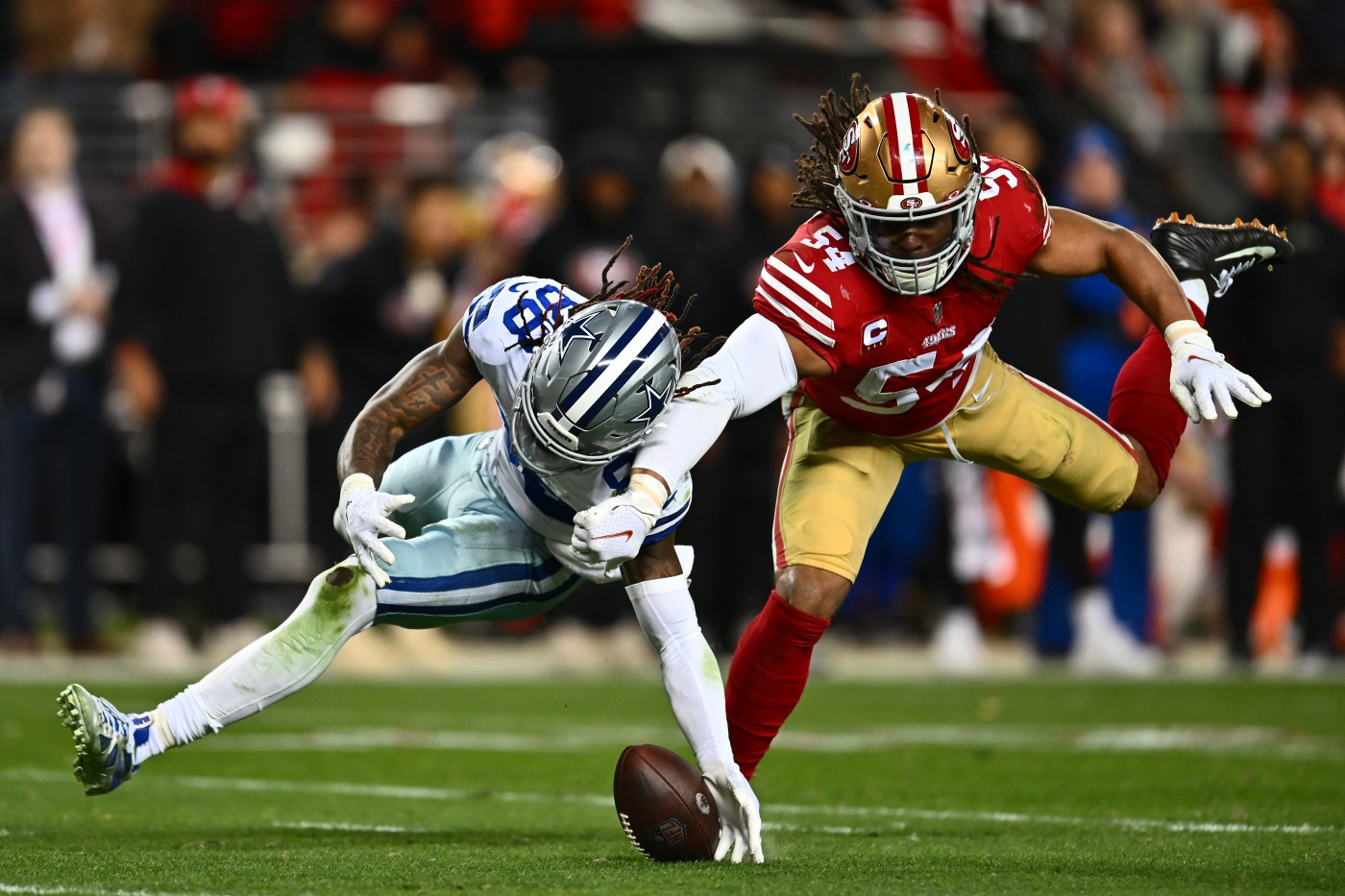 George Kittle’s juggling 30-yard catch to midfield sparked the go-ahead touchdown drive, plus he drew a holding call that further set up that touchdown, and he caught all five of his targets for a team-high 95 yards. This is Kittle’s best season to date. Brock Purdy became only the third rookie quarterback to win two playoff games (Joe Flacco, Ravens 2008; Mark Sanchez, Jets 2009), and Purdy did not do it sheepishly. He kept firing into the fourth quarter to keep drives alive and eat just enough time off the clock, finishing 19-of-29 for 214 yards and no turnovers. Purdy was sacked twice early but proved elusive again. Micah Parsons’ speed and athleticism was the toughest assignment Kittle has encountered as a blocker, and Parsons was a difficult matchup for Mike McGlinchey. But the line held up OK against the most pressure it’s faced all season — until next Sunday in Philadelphia. Other receivers: Deebo Samuel (four catches, 45 yards), Brandon Aiyuk (two catches, 26 yards), Third-and-Jauan Jennings (two catches, 26 yards) and Christian McCaffrey (six catches, 22 yards).

The 49ers’ easiest run all day may have been their most vital: McCaffrey’s 2-yard touchdown run up the middle thanks to tremendous blocks across the line. McCaffrey totaled just 35 yards on 10 carries. As McCaffrey battled a right calf issue, he was spelled well by Elijah Mitchell, who had 51 yards (14 carries) but also ran out of bounds to stop the clock at 1:47. Samuel had 11 yards on four carries. “To get over 30 carries when we’re averaging just 3.5 (yards per carry), that shows how good the team is doing. We wore them down a little bit,” Kyle Shanahan said of their 32-carry, 113-yard effort.

Kudos to nickel back Jimmie Ward for putting an exclamation mark on this win, with his game-ending tackle to ruin any trick-play finish. Deommodore Lenoir and Fred Warner made first-half interceptions, and Dre Greenlaw came ever so close to a pick-six in the closing minutes against Prescott, who tied for the NFL regular-season lead with 15 interceptions but had none in a five-touchdown wild-card masterpiece last week in Tampa. Samson Ebukam came through with the 49ers’ only sack. Nick Bosa was surprisingly quiet, though he did make an impact late with a bull rush. Bosa lined up wider than usual on some snaps, almost as if he were in a nickel-back slot. Warner’s coverage ability shined when he kept CeeDee Lamb from cutting inside on a red-zone shot.

Dallas’ run game was cooked once Pro Bowler Tony Pollard exited in the second quarter with a leg injury. “Their offense changed up not having him back there,” said Warner, who had a team-high nine tackles, including a stop of Pollard for a 2-yard loss on Dallas’ opening possession. Pollard left with just 22 yards, …read more

Dear Abby: How do I regain a friend who believed my ex-wife’s lies?

DEAR ABBY: About 10 years ago, my longtime best friend, “Byron,” abruptly cut me out of his life. I never clearly understood why. I reached out to him on and off for several years without success. Then I ran into him, traded pleasantries and we followed up. He returned my email, we began communicating again […]

Miami Dolphins quarterback Tua Tagovailoa has cleared the concussion protocol, according to a league source Wednesday. Tagovailoa went through more than a month-long process to clear the NFL protocol to return to play from a concussion after first being diagnosed with his second concussion in the 2022 season on Dec. 26, the day after the […]

Hit-making rapper Drake took the stage at New York City’s famed Apollo Theater in January 2023 for two long-awaited concerts following the release of Her Loss, his collaborative album with 21 Savage released in November 2022. Drake performed two shows at the iconic venue, and in the middle of his second night at the Apollo, […]