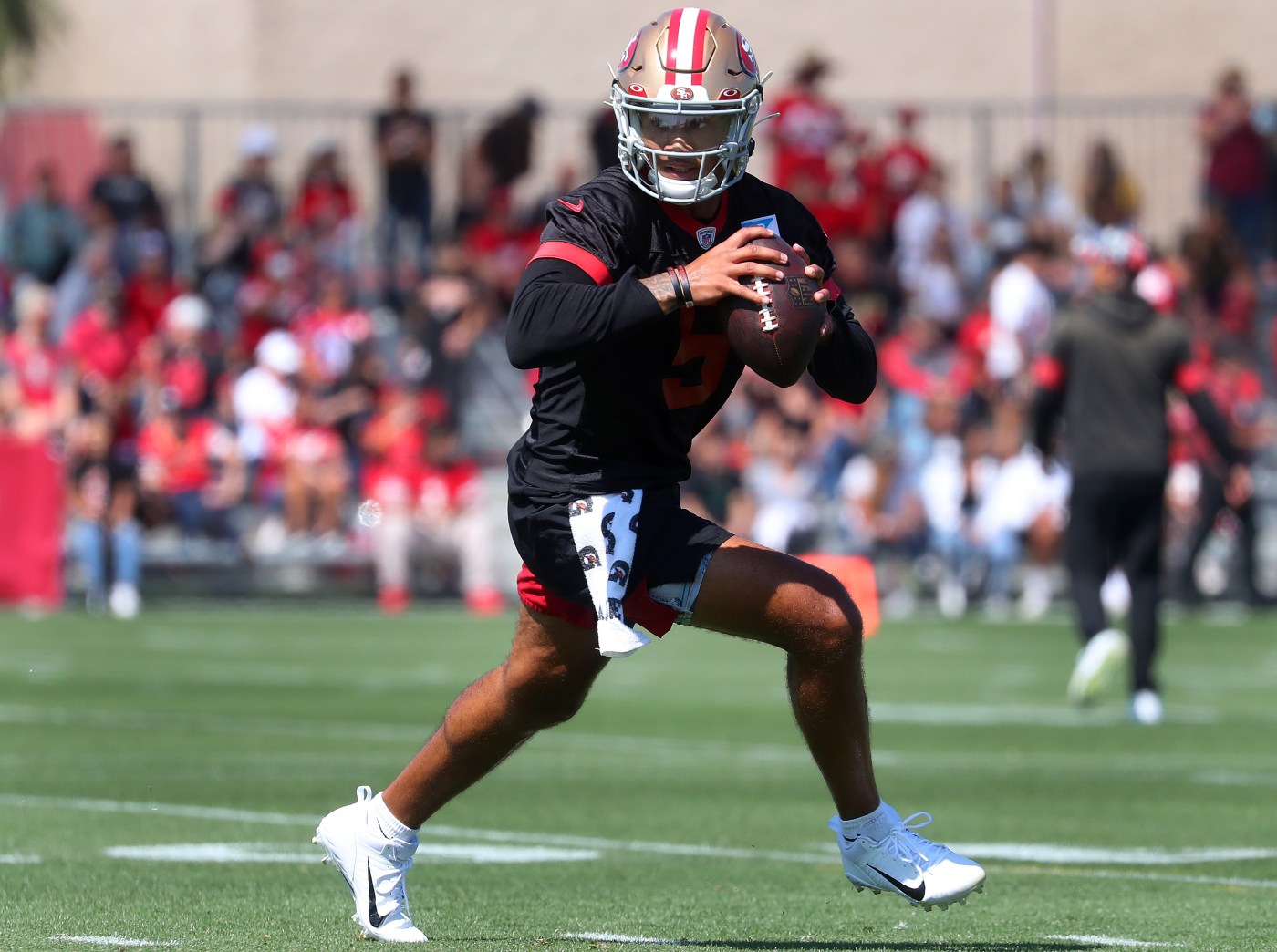 SANTA CLARA — There was an indication early Friday the 49ers’ passing game may be getting on track when Trey Lance threw a perfectly-timed laser to Ray-Ray McCloud on a quick crossing route that went for big yardage and had the crowd buzzing in the grandstands along the sideline.

It came against Charvarious Ward, no less, the big-ticket free agent cornerback who has been in lockdown mode since reporting day.

The 49ers went on to have their most efficient day through the air. After having 11 interceptions in the opening days of practice, 49ers quarterbacks Lance, Nate Sudfeld and Brock Purdy weren’t intercepted at all for the third straight day. That’s significant for Lance in particular, considering he threw interceptions in four straight sessions leading up to that point.

Passes were completed at a higher rate. Lance was 8 of 12 overall and one of those was a drop by Malik Turner. If you want to nitpick, there was one overthrow intended for Deebo Samuel, and the two have some work to do in terms of chemistry after Samuel took no reps in the offseason or in the early portion of camp before signing his contract extension.

Lance and Samuel are working on it. Following practice, Lance, whose arm appears to be fine after a pre-camp report of a sore arm, threw deep shots to both Samuel and McCloud for nearly 40 minutes while teammates adjourned to the locker room or signed autographs for fans.

Early indications are McCloud’s contributions could go well beyond being a return specialist and he could fit in nicely with Samuel, Brandon Aiyuk and Jauan Jennings to give the 49ers a stronger receiving corps than they’ve had in years.

Backup Nate Sudfeld completed his first 11 passes and was 12 of 15 overall. Sudfeld did connect with Samuel on a deep throw with Talanoa Hufanga in coverage.

Safety Tarvarious Moore, who has been better than expected coming off an Achilles’ tear that cost him the 2021 season, conceded the offense was beginning to come around.

“The pass game is definitely kicking up,” Moore said. “They’re making it tougher for us, giving us different looks, running routes out of different formations and making us stay real disciplined.”

Tight end Ross Dwelley, in his fifth training camp, thought the slow start offensive had more to do with the normal flow of training camp than it did with Lance taking over at quarterback.

“That’s how it usually is,” Dwelley said. “Defense usually comes in and makes some plays while the offense jells when getting pads on,” Dwelley said. “It’s getting into the rhythm. But as training camp goes in, we start vibing with each other and it usually starts picking up a little bit.”

Lance’s passing inconsistency has been duly noted, but at the same time isn’t cause for serious concern. Every day he’s facing a defense that is one of the best he’ll see, and specific game-planning is not part of the early camp process.

It’s not what Lance is doing it as much as how he’s doing it, …read more

Brad “Guitar” Wilson is riding high with the release of his latest full-length album, a self-titled effort that topped the blues rock charts back in July and remains a hot seller with fans. One of the key tracks from that album is a live version of “I Can’t Quit You Baby,” which has also been […]

MONTEREY COUNTY — A man sentenced to prison 25 years ago for a robbery conviction in Santa Clara County was reportedly killed by another inmate at Salinas Valley State Prison last week, authorities said. Peter Hernandez, 59, was gravely wounded Wednesday morning at the prison located in the Monterey County city of Soledad, according to […]