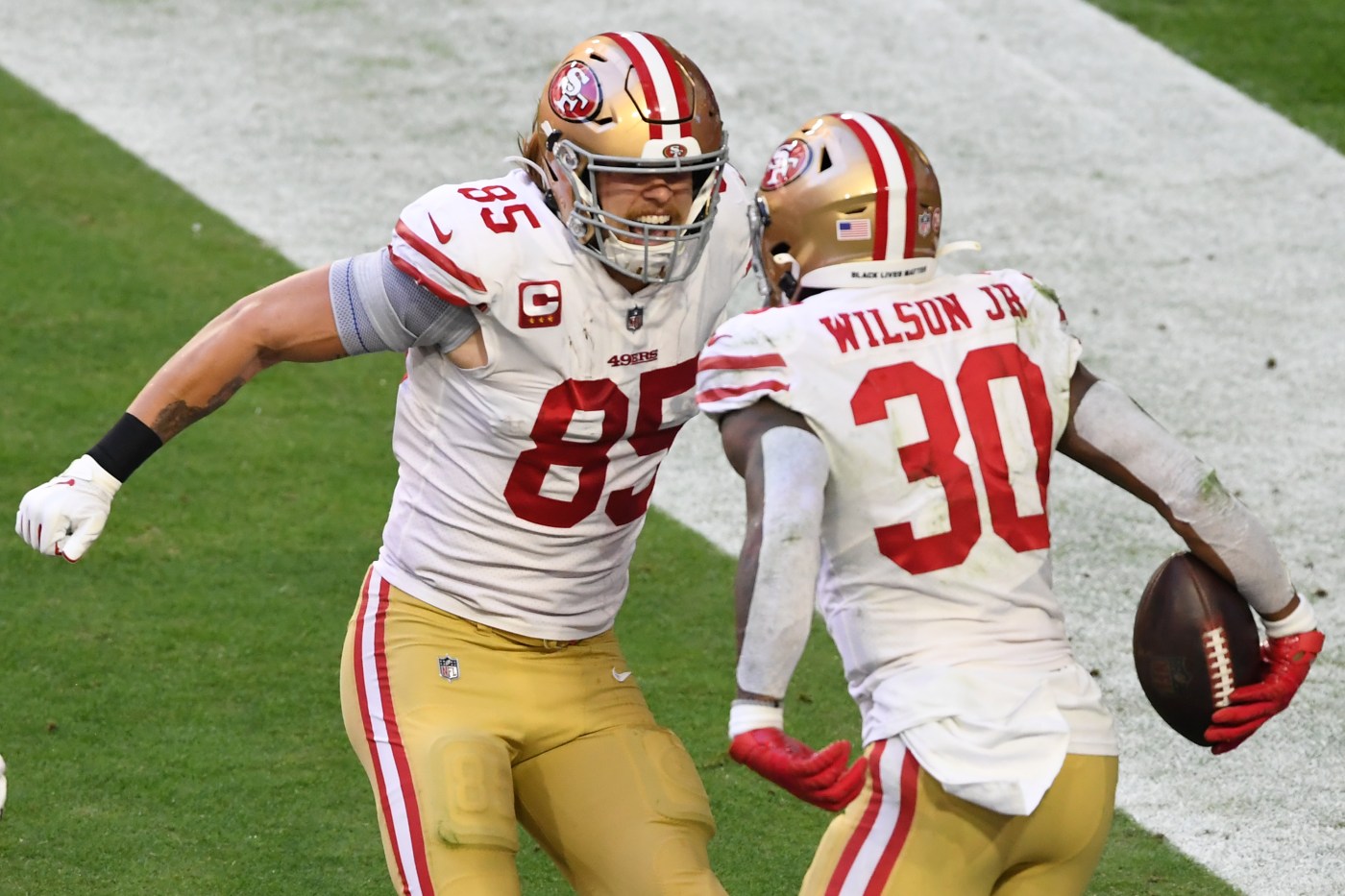 SANTA CLARA — George Kittle’s season debut should come Sunday night in Denver, and while his explosive ability as a receiver could complement Jimmy Garoppolo’s first start since last season’s playoffs, Kittle’s blocking prowess will enhance the NFL’s No. 4 rushing attack.

“He means a ton in both (facets),” coach Kyle Shanahan said Friday, when Kittle fully was cleared to play. “He’s one of our better players. Having him out there is a huge deal for us.”

That leads to the weekly question: Which 49ers’ running backs will play?

Jeff Wilson Jr. is coming off an 83-yard, turn-back-the-clock effort in Sunday’s home-opening win over Seattle, so he’ll remain the primary option to take Garoppolo’s handoffs or pitches.

And then? Well, with Elijah Mitchell on Injured Reserve (knee) and Ty Davis-Price (ankle) likely out a month, the 49ers’ remaining options are to give rookie Jordan (“J.P.”) Mason his first NFL touches, to have veteran Marlon Mack make his 49ers’ debut, and, perhaps most irristable of all, to let Deebo Samuel take the ball and rumble.

“Yeah, I need a program and a depth chart to know who’s up for sure,” run game coordinator Chris Foerster quipped Thursday. “So it’s been rough at that position for those guys.”

Arik Armstead (foot) still not practicing, as case all week

Regardless, it’s not a one-man band in the backfield, with Garoppolo working as the handoff maestro.

Wilson is a favorite of coaches and teammates, but as Foerster noted: “Jeff’s thing has been, out of all of it, has been durability. He runs like a big back. He runs physically. He runs tough. … With all of them, you just can’t wear them out. That’s why you have to have a couple guys back there that can tote the rock, even on the good running teams.

“When you look at Cleveland, who’s an excellent running team, they’ve got the two runners, you’ve got (Nick) Chubb and you’ve got (Kareem) Hunt. … There’s traditionally, always a second guy, so it’s not going to be Jeff Wilson, just toting the mail every single snap.”

Wilson had 18 carries against the Seahawks, and Davis-Price had 14 while, unbeknownst to him and the 49ers, the rookie was playing on a high ankle sprain, an injury that will keep him out Sunday and maybe shelve him a month. Samuel had just four carries, but he took one for 51 yards.

“At the end of the day, they’re going to try to feature Deebo and try to get him all of his touches,” Broncos defensive coordinator Ejiro Evero said Thursday. “(The Broncos) understand that it’s going through him and going through (No.) 85, (Kittle). The run game is the key to their success.”

FREMONT — Hundreds of homes could replace a big chunk of a prominent shopping center in Fremont, part of a wide-ranging transformation of the Bay Area retail sector in the wake of the coronavirus. The housing would be built in a section of Gateway Plaza, a shopping center at the corner of Paseo Padre Parkway […]

A federal appeals court is allowing the Justice Department to continue looking at documents marked as classified that were seized from former President Donald Trump’s Mar-a-Lago home and resort. The emergency intervention upends a trial judge’s order over those documents that blocked federal investigators’ work on the documents, and is a strong rebuke of the […]

The 5 Best Hallmark Fall Movies of All Time, According to Viewers

Harvest Love | Hallmark Channel via Every year since 2015, Hallmark Channel celebrates autumn leaves, pumpkins, and crisp weather during the Hallmark Fall Harvest. Taking place in September and October, the annual event offers a series of romantic and heartwarming movies. Now that fall is upon us, let’s look back at the five best Hallmark […]