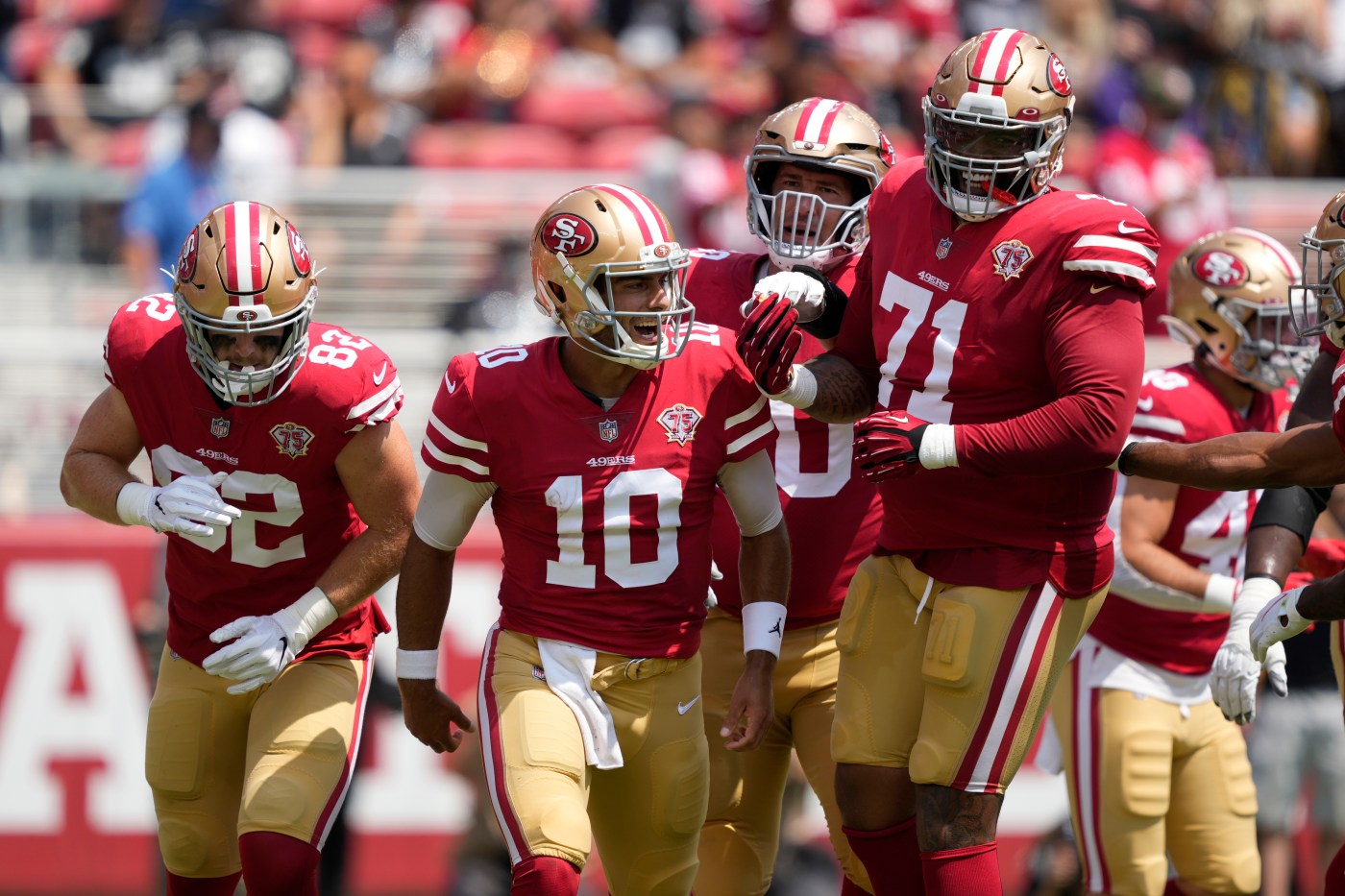 SANTA CLARA — The 49ers listed four players as questionable for their playoff opener at Dallas, and not among those in doubt are left tackle Trent Williams and quarterback Jimmy Garoppolo.

Williams, who made First Team All-Pro on Friday, is fully expected to face the Cowboys after an elbow sprain kept him out of the 49ers’ regular-season finale against the Rams.

Garoppolo will make start a second straight game despite a torn ligament in his right thumb, having practiced in full Wednesday for the first time since his Dec. 23 sprain.

Questionable are punter Mitch Wishnowsky (concussion), safety Talanoa Hufanga (groin) and linebackers Azeez Al-Shaair (knee) and Marcell Harris (Achilles). Al-Shaair did not participate in Friday’s walk-through. Wishnowsky can clear through the concussion protocol if he has no symptoms Saturday, coach Kyle Shanahan said.

Fullback Kyle Juszczyk, who got emotional a year ago about his potential departure in free agency, has felt similar feelings late in the season regarding Garoppolo’s uncertain future.

Juszczyzk was compelled before last game to point out to Garoppolo it could be their last game together, presuming the 49ers part with their quarterback in favor of Trey Lance next season. “I didn’t know when was the right time to say something,” Juszczyk recalled of Saturday’s moment. “At the end of day, he’s been my quarterback for five years and I wanted to let him know I appreciate him. Through all ups and downs, he’s been such a professional and friend.

“When he hit Deebo down the sideline to put us in position (for a game-tying touchdown drive Sunday), I’m like, ‘Wow, look at Jim step up to the plate, with his back against the wall, in what could be his last pass as a Niner, and he delivers. I’m proud to see what he’s doing.”

That includes how Garoppolo has handled Lance’s presence since Day 1. “There’s never been an awkwardness to it. Both have driven themselves to play at a high level,” Juszczyk said. “On the personal side, we don’t talk too much about it. There’ve been times we’ve dove into it, but we don’t take it too far because we don’t want to get emotional. We’ve been playing so long together and mean so much to each other that we’ve avoided the topic.”

Juszczyk, by the way, relished serving as the emergency holder last game, saying he thought in high school he would make it to the NFL as a holder, thinking it was a specialized position. “I genuinely thought I was so good at it,” Juszczyk recalled. “Growing up, my brother was a long snapper and that’s all we did in the back yard, he snapped and I held.” (Wishnowsky will resume that role Sunday if he’s cleared from concussion protocol.)

After 17 games (plus overtime in Sunday), how exhausted are the 49ers? Not enough to tamper down their confidence and goals.

“Most of the teams in the playoffs are pretty confident right now and we’re no different,” Shanahan said. “We felt real confident going into Tennessee and had a …read more

OAKLAND — A 43-year-old man shot Tuesday morning in a parking lot across the street from the West Oakland BART Station has died, authorities said. Harry Lawrence, of Oakland, died Wednesday at a hospital where he had been taken after the shooting. The shooting happened about 11:08 a.m. Tuesday in a convenience store parking lot […]

‘This Is Us’ Creator Dan Fogelman Reveals Details About the Early Episodes of Season 6: ‘We’re Really Going to Stay in the Present’

Sterling K. Brown as Randall, Chrissy Metz as Kate, and Justin Hartley as Kevin | Photo by: Joe Pugliese/NBC/NBCU Photo Bank via Getty Images Dan Fogelman teases the first few episodes of ‘This Is Us’ Season 6 Before the This Is Us Season 6 premiere, Dan Fogelman sat down with The mystery surrounding the Pearson […]

Jessica Chastain Married a Royal — So What’s Her Title Now?

Jessica Chastain and Gian Luca Passi de Preposulo smile on the red carpet at the Golden Globe Awards | Kevork Djansezian/NBCU Photo Bank/NBCUniversal via Getty Images Chastain tied the knot in 2017 In 2017, Chastain announced that she married her longtime beau in a tweet asking followers not to share photos of her wedding obtained […]