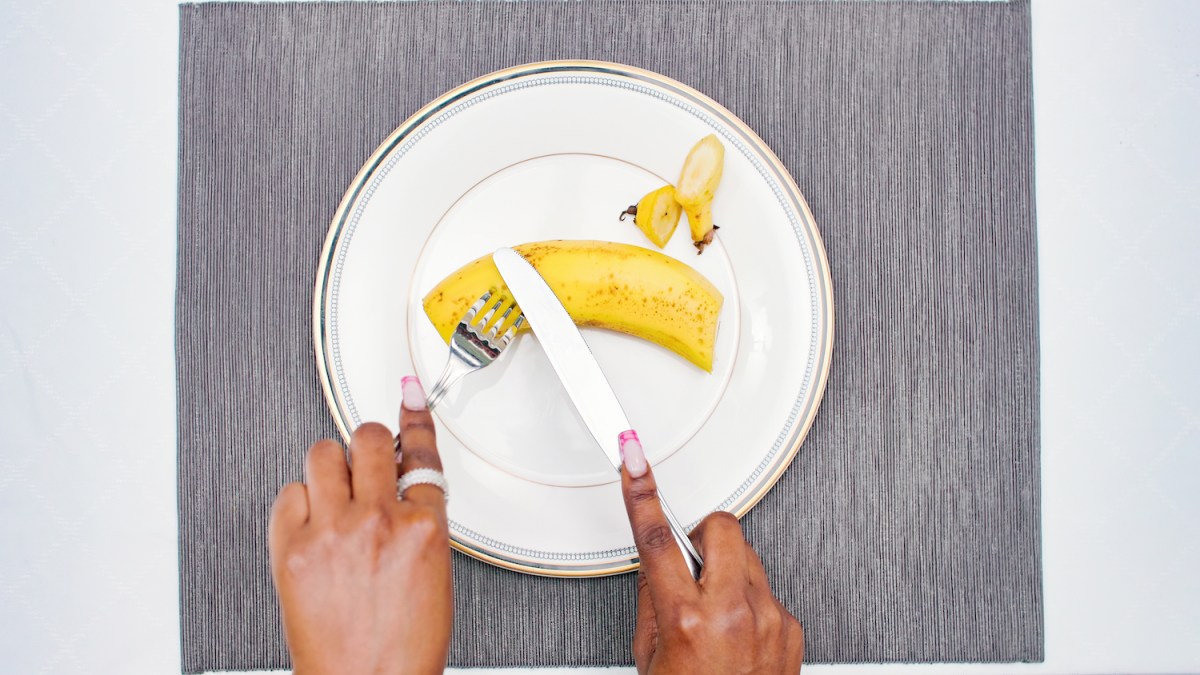 The holiday season is upon us, which means for most people, the temperature outside has dropped, forcing us indoors. That leaves us with plenty of time to catch up on some shows over the next few weeks. If you’re looking for something to watch, we’ve got you covered. Here are three Netflix shows to binge over Thanksgiving break.

Did you know there’s a correct way to cut a banana? Check out ‘Mind Your Manners,’ a great choice for Netflix shows to binge over Thanksgiving break. | Cr. Courtesy of Netflix © 2022

In the mood for drama? Press play on the Netflix series ‘The Crown’

The world mourned earlier this year when Queen Elizabeth II died at 96 years old. This reportedly sent showrunners for the Netflix series The Crown scrambling to make adjustments to the show. The Crown follows a fictionalized version of the Royals’ lives beginning in the 1940s, and as of season 5, they’ve reached the years involving Princess Diana. For those obsessed with the British monarchy, The Crown serves as a great way to watch how everything (mostly) went down.

RELATED: ‘The Crown’ Under Fire For Alluding to Yet Another Prince Philip Affair In Season 5

If you watched Dark, you know how much work the showrunners, Boran bo Odar and Jantje Friese, put into creating the edge-of-your-seat mystery. Now, the duo is back with an entirely new story. 1899 follows the passengers on a ship called the Kerberos traveling from Europe to New York. When they stumble upon the Prometheus, a ship that went missing four months earlier, things start to get a little bonkers. 1899 isn’t a show you can idly watch in the background and definitely requires your full attention, but if you’re in the mood for mystery and looking for a Netflix show to binge, this is a perfect choice.

1899 is streaming exclusively on Netflix.

Looking for something different? ‘Mind Your Manners’ is a great option for Netflix shows to binge

These days there’s a reality TV show for almost everything. But remember when everyone went nuts over Marie Kondo’s Sparking Joy on Netflix? It was basically ASMR for people who love to watch others get organized. Mind Your Manners is in a similar vein.

The Netflix synopsis reads, “Have you ever wondered how to elegantly cut… a banana? Mind Your Manners follows world-renowned etiquette teacher Sara Jane Ho as she helps her students become their best selves and put others at ease, using the language of manners and etiquette. Get ready to laugh, cry, and learn a thing or two as Sara transforms her students’ lives and helps them acquire the confidence to shine in any situation – starting with a sensible spot of afternoon tea. Pinkies in or out?”

What about you? Do you have any Netflix shows to binge over the Thanksgiving holiday? Let me know in the comments down …read more

Bob Dylan Went ‘Completely Nuts’ on His Tour Manager for Having a Piece of Cake: ‘He Can Be an A**hole’

For years, one of Bob Dylan’s closest friends and confidants was his tour manager, Victor Maymudes. They worked together for years, and Maymudes was present for many historical moments. They had a falling out in the late 1990s, but their relationship hit several snags before this. Maymudes recalled a time when Dylan screamed at him […]

Jill On Money: Is the tech rout over?