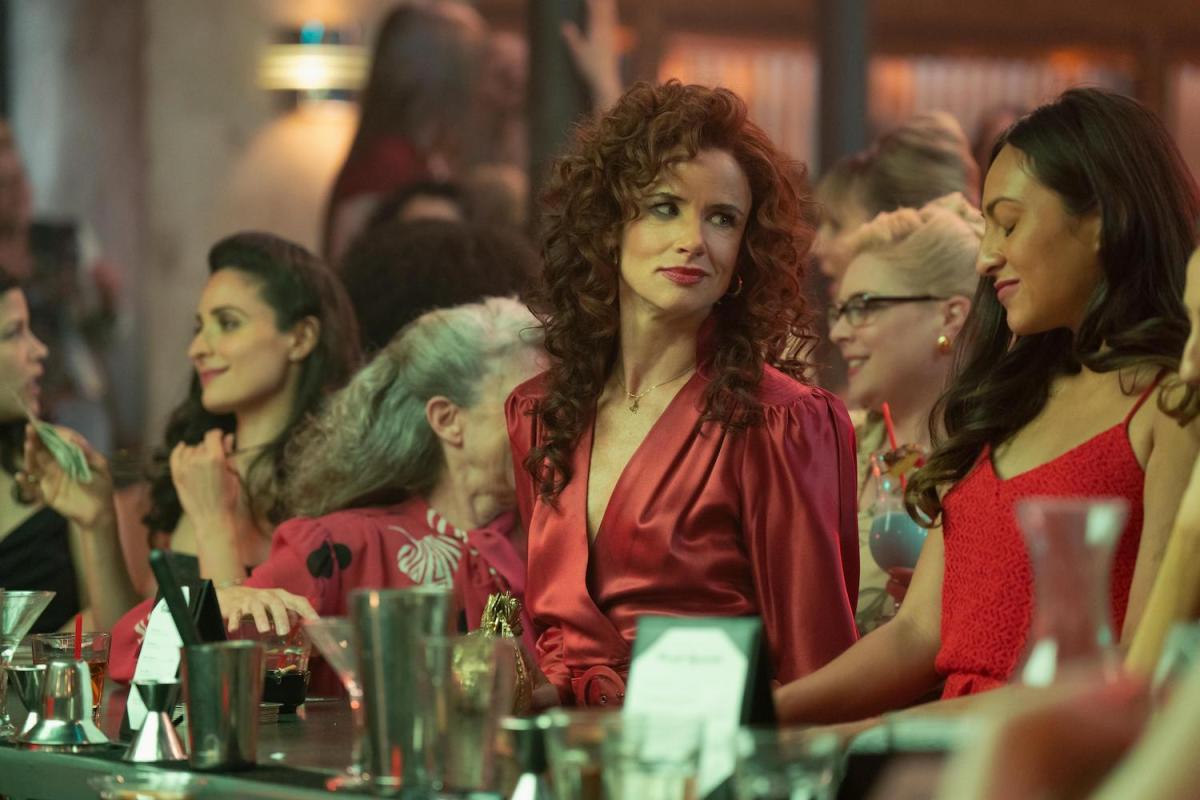 If you’re like us, Thanksgiving provides the perfect time to sit back, relax, and binge-watch TV shows while you let all the turkey and pumpkin pie digest. From documentaries to original series, Hulu has plenty of options to keep you occupied over the holiday break. In case you don’t live and breathe television like we do, we’ve got you covered. Here are three Hulu shows to binge during Thanksgiving break.

Juliette Lewis in ‘Welcome to Chippendales.’ Keep reading for more Hulu shows to binge over the holidays. | Photo by: Erin Simkin/Hulu

Who doesn’t love a story filled with drama, deceit, and male strippers? If that sounds right up your alley, you’re in luck. Welcome to Chippendales might be an excellent option for Hulu shows to binge over the holidays. However, if you’re hanging out with grandma or little ones, maybe save it for later.

It’s from the same people who brought you Pam and Tommy, so that bodes well for the series. The first two episodes dropped on Nov. 22, but after that, new episodes air weekly.

RELATED: ‘Welcome to Chippendales’ Touches on the Murder-Suicide of Paul Snider and Playboy Playmate Dorothy Stratten

‘God Forbid: The Sex Scandal That Brought Down a Dynasty’ features the Falwell family’s downfall

In the Hulu documentary, God Forbid: The Sex Scandal That Brought Down a Dynasty, executive producer Billy Corben shines a light on Jerry Falwell Jr., his wife Becki, and Giancarlo Granda. In 2012, Becki began an affair with Granda, a pool boy at the Fontainebleau Hotel in Miami. The affair lasted several years, and eventually, the news became public. This documentary takes a look at the downfall of Falwell Jr. and the events that took place. At a little less than two hours long, it makes for a very interesting watch with commentary from Granda himself and, oddly enough, the actor Tom Arnold.

Check out God Forbid: The Sex Scandal That Brought Down a Dynasty streaming on Hulu.

We admit, the subject matter in The Handmaid’s Tale is definitely heavy, but it’s so, so good. Winning 15 Primetime Emmys, the series stars Elisabeth Moss in a dystopian future where very few women are able to get pregnant. Moss’s character, June, is a concubine during the early years, but as she meets more and more women tired of the dictatorship they live under, they begin to rebel. It’s based on Margaret Atwood’s 1985 novel of the same name.

Hulu’s synopsis reads, “The Handmaid’s Tale is the story of life in the dystopia of Gilead, a totalitarian society in what was formerly the United States. …read more

Initially, George Harrison didn’t want to appear at The Beatles’ Rock & Roll Hall of Fame induction ceremony in 1988. Of all The Beatles (except John Lennon, who died in 1980), George should’ve been the least likely to attend. He wasn’t into adulation for several reasons, not just because he was humble. George wasn’t the […]

Bradley Cooper Got His 1st Paid Acting Job at 26

Bradley Cooper and Jennifer Garner film an episode of Alias in 2001 | Richard Cartwright /ABC via Getty Images Bradley Cooper is an established member of mainstream Hollywood. But like most actors, it took him several years to get established in the industry. The Pennsylvania native was in the back half of his twenties before […]

‘The Amazing Race 34’: Derek and Claire Explain the Roadblock Rules and Their Strategy

Derek Xiao | Photo: CBS Claire and Derek have made it to the final 5 in ‘The Amazing Race 34’ Before The Amazing Race 34 premiered, many fans were already rooting for Derek and Claire. They were fan favorites from Big Brother 23, with Derek coming in second place for America’s Favorite Player. And since […]