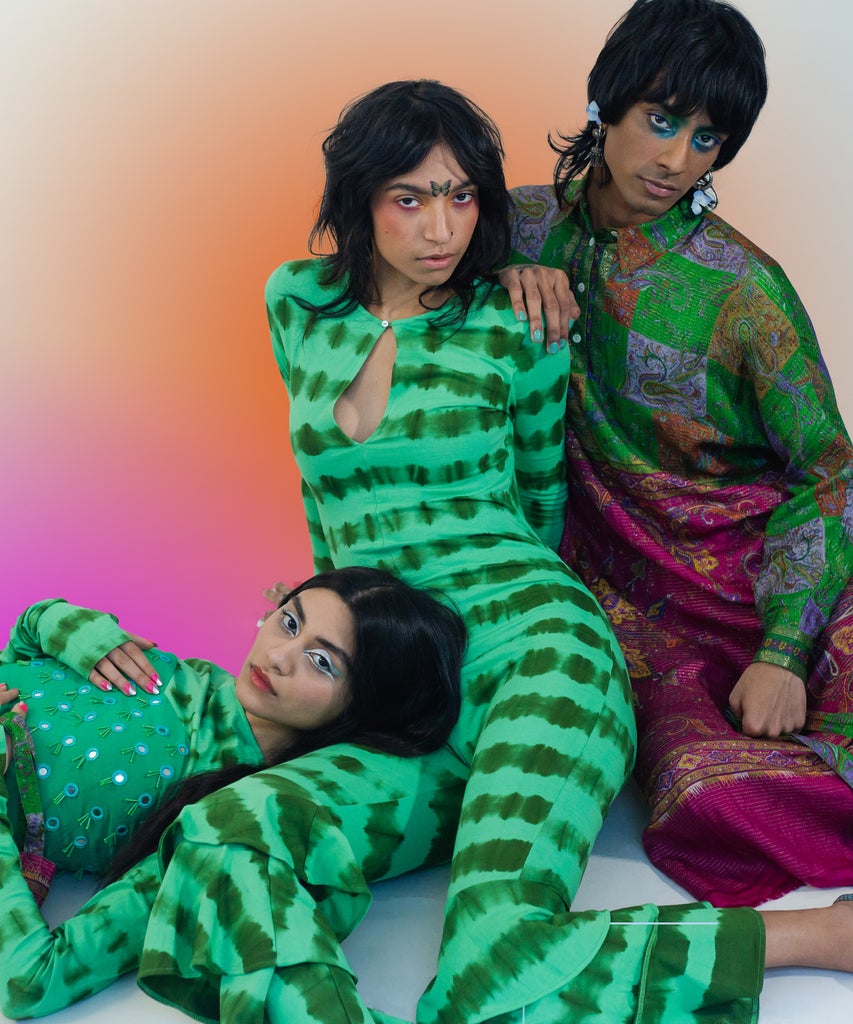 Clothing is a cultural touchstone for communities around the world. Traditional ceremonies, from weddings to quinceañeras,  revolve around a particular garment that’s meant to represent not only the occasion, but the history behind it. The sari — a traditional garment worn by women in South Asia — is one of the most recognizable. And while saris hold a significant cultural value, designer Sheena Sood is trying to give them new life through the simple act of upcycling.

“I’ve been thinking a lot about ways to repurpose this material that a lot of us may have but we wear only once,” says Sood, the founder of New York-based indie label abacaxi, named after the Portuguese word for “pineapple” and known for its bold colors and handcrafted techniques.

Last month, Sood launched the Up-Sari Set, a new line of matching sets made from upcycled vintage saris from India. Each set comes with a long-sleeved top, featuring a collar and a shell-button placket, as well as wide-leg pants — all made from woven cotton and silk fabrics sourced from the South Asian country.

“I wanted to design something that is very versatile that can bring this material back into our everyday life,” says Sood. “You can wear [the pieces] together [for] more of a formal look, but you can also mix and match.” Retailing for $500, each set is made-to-order as part of the brand’s “Plants as People” collection, which the designer recently launched, featuring ribbed sweaters, hoodies, and joggers with Y2K-ready butterfly appliqués and tie-dye prints.

Traditionally, saris are worn in India, Pakistan, Bangladesh, Sri Lanka, and Nepal with various styles of fabrics and drapings, depending on each culture and occasion. Although they are heavily rooted in Eastern nations, their cultural heritage has migrated all over the world, thanks to the South Asian diasporas. There are over 100 ways to wear a sari, but the most common style is the Nivi, worn with a fitted bodice and a loose end, called the pallu, draped over the shoulder. Ironically, this style emerged as an adaptation to British ways of dressing during the Victorian era, a lingering effect of colonial rule in the region for nearly a century. Many saris don’t include zippers or buttons, and are instead held together by pins, allowing women to adapt the pieces to their body as they please.

In many ways, the Up-Sari project has been a lifetime in the making. Though Sood grew up in the Midwest, she remembers strolling through local markets in New Delhi and “being fascinated by all the textiles.” She says this experience is largely what ignited her interest in becoming a designer: not only the saris’ rich colors and ostentatious beading, but their structure and functionality. For Sood, saris are “the ultimate design because it’s a piece that can fit almost anybody.” Unlike her mother, who has “never liked wearing saris,” Sood enjoys wearing them and has always had a soft spot for their value as family heirlooms. “There are saris …read more

Welcome to Money Diaries where we are tackling the ever-present taboo that is money. We’re asking real people how they spend their hard-earned money during a seven-day period — and we’re tracking every last dollar. Has someone you dated ever been less-than-honest about their finances? Was it a deal breaker? Tell us your experience here to be featured […]

Sister Wives in Crisis: Will Meri and Christine Soon Be Out of a Job?

We’ve known for many months now that Meri Brown and Christine Brown were unhappy in their personal lives. How could they not be… considering both are married to a man who pays no attention to their needs? Meri has continually shared cryptic memes and messages about the state of her marriage, while Christine said on […]

The Best Memory Foam Pillows For Every Type Of Sleeper

As a child, you go have pillow fights, but as an adult, you’re more likely to fight your pillow. If you consistently wake up in the AM with a crick in your neck, a headache, and a bad attitude then your pillow might just be conspiring against you. The solution? Scoring yourself a quality memory […]