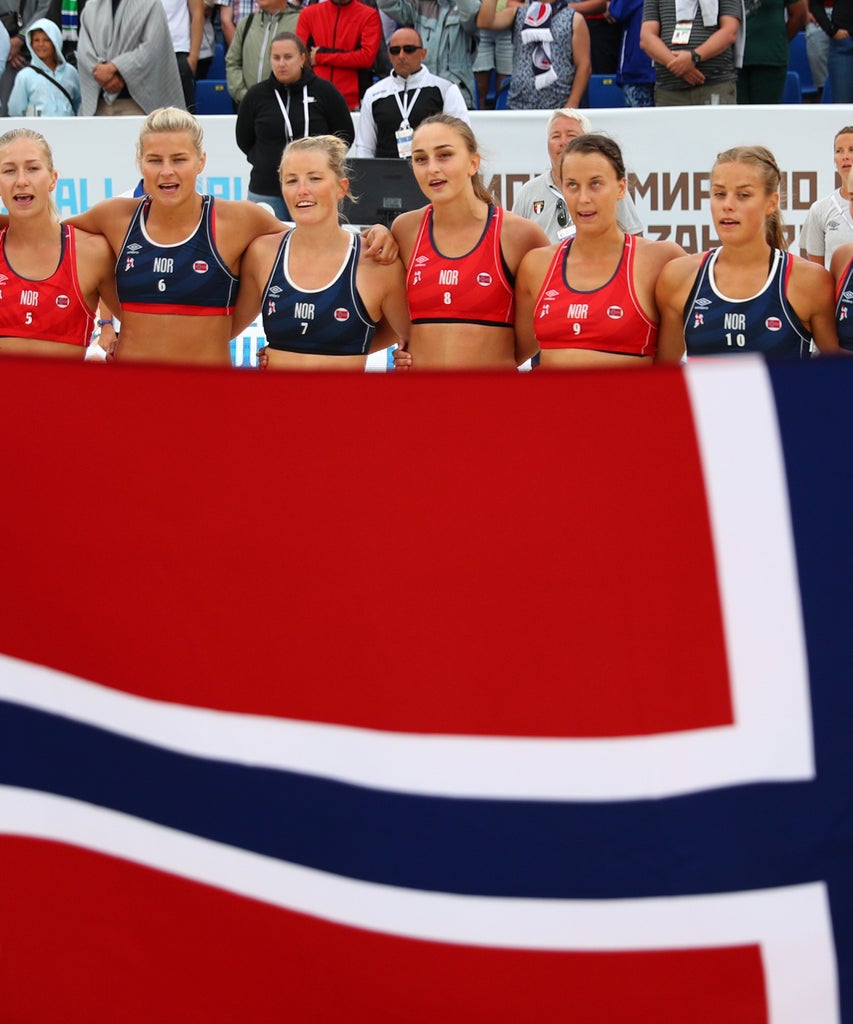 Dress codes for women in sports represent a long fight for equality, and shorts are the latest item to stir controversy.

Last weekend, Norway’s women’s beach handball team opted to wear blue shorts to a game, instead of the usual athletic bikini bottoms worn for these events. By Monday, the team was fined by the European Handball Federation because the shorts didn’t meet requirements from the organization. According to The New York Times, the Federation requires that female athletes wear bikini bottoms “with a close fit and cut on an upward angle toward the top of the leg.”

The team had planned for some time to ignore the rules this year in order highlight the double standard set for women athletes across the sports world. Players paired their red and blue sports bras with royal blue shorts, and each one of them was fined an estimated $177 (€150) for it.

“Women should have the right to have a uniform they think is suitable for performing in their sport,” Kare Geir Lio, the head of the Norwegian Handball Federation, told The New York Times.

Beyond dress codes, many have pointed out that the Olympics and international sports organizations are enforcing discriminatory practices through their uniform policies. Earlier this month, swimming caps for natural hair were ruled out of the Olympics by the International Swimming Federation because “the athletes competing at the international events never used, neither require caps of such size and configuration.” Although the body did not allow accommodations for Black swimmers, it’s worth noting that the original Speedo cap was first created to prevent white women’s hair from flowing around while they swim. There have also been cases of religious discrimination. Back in 2012, the Iranian women’s soccer team was disqualified for showing up in headscarves. By 2016, international outrage helped fencer Ibtihaj Muhammad become the first U.S. athlete to compete wearing a headscarf.

The Olympics Ban On Afro Swim Caps Is Outrageous

Telfar Moves Into Sportswear, But Why Now?

A new, six-minute trailer for Dune is here. Dune was supposed to come out last year and now it’s coming out in October. [OMG Blog]Henry Golding is very attractive. [Go Fug Yourself]Mindy Kaling talks about the stupid backlash she’s getting for making Scooby Doo’s Velma South Asian. [Buzzfeed] TikToker’s mom has a pantry full of […]

LOS ANGELES, CALIFORNIA – JULY 12: Zendaya attends the Premiere of Warner Bros “Space Jam: A New Legacy” at Regal LA Live on July 12, 2021 in Los Angeles, California. (Photo by Axelle/Bauer-Griffin/FilmMagic) As if the ‘90s and ‘00s weren’t already having a moment in fashion, Zendaya is now taking on a classic Looney Tunes […]