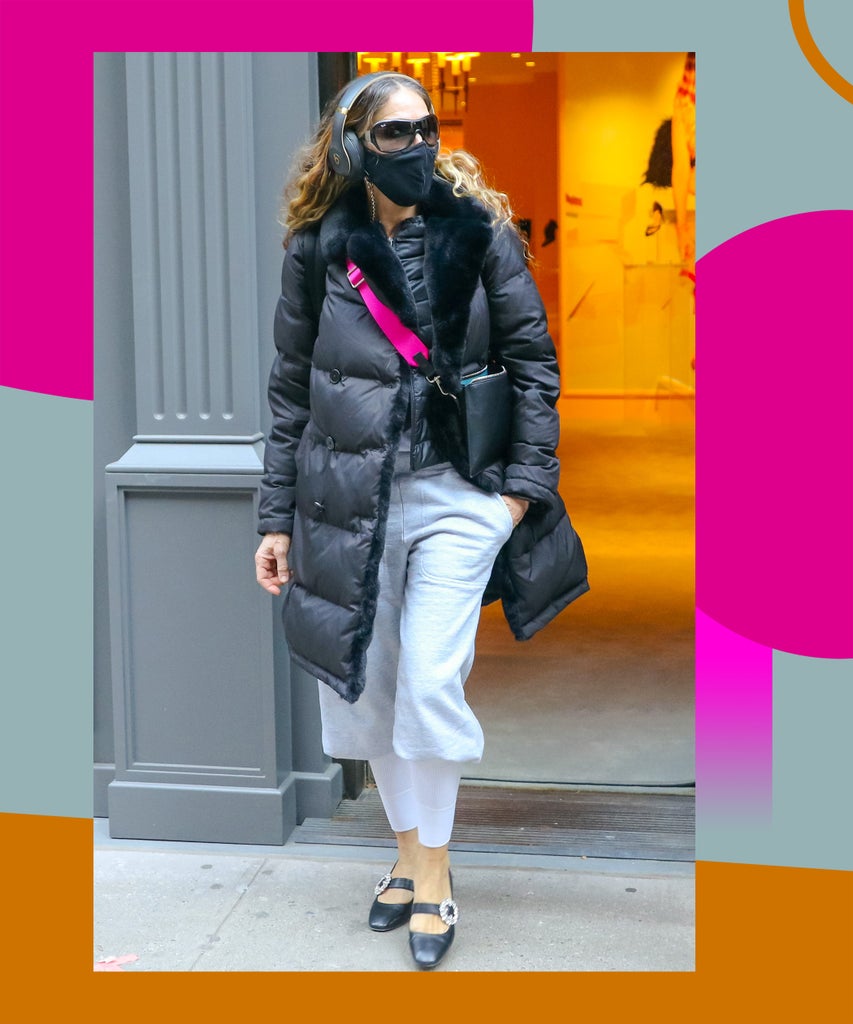 On Tuesday, following the Sex and the City reboot announcement, Sarah Jessica Parker was spotted in her footwear brand SJP by Sarah Jessica Parker’s flagship store in Manhattan. For the occasion, the actress-designer wore a pair of black, kitten heeled Mary-Janes from her brand, which she styled with a gray sweater and capri sweatpants. Given that it’s January in New York, though, she layered what looks like long underwear underneath. And, since it’s Carrie Bradshaw we’re talking about, it actually worked.

Personally, when I think of long underwear, an image of one-pieces one would wear hidden underneath a snowsuit or other layers for a day on the slopes or a winter hike pop ups. However, that’s not the case for Parker’s version of the cold-weather layer which appears waffle-knit and features a fitted ankle cuff. Instead, in line with the popular lingerie as outerwear trend, her long underwear serves as a pair of leggings and peeks out from above her low-rise shorts. (It’s also possible that Parker is wearing leggings that only look like long underwear.)

She also wore a black, ribbed face mask by Masqd, which was attached to a thin, silver chain. Once outside, Parker put on a midi-length puffer coat from Gerard Darel and a backpack from her brand’s collaboration with Samsonite (see top photo).

Whether in character on SATC or in real life, Parker has a reputation for pulling off unusual sartorial ensembles. As Bradshaw, she famously wore a belt above the waist of her skirt, as well as a cowboy hat with a bandeau bra, among other memorable outfits. IRL, the actress also makes unconventional style pairings — many of which involve wearing sweatpants with designer boots and oversized headphones — look fashionable. So, we can’t say it’s all that surprising that, of all people, Parker would find a way to convince us that long underwear can be a winter staple worth showing off.

HBO Max May Be Rebooting SATC — Without Samantha

Leah Messer Breaks Down in Wake of Addiction, Abortion Reveals

Donald Trump: Eff You, Twitter! I’m Starting My Own Platform!

Donald Trump doesn’t care that close to 400,000 Americans are dead from the coronavirus. Nor does it bother him that five people were killed and a government building placed on lockdown because a slew of his supporters committed an act of treason last Wednesday. However, the President is very angry that he’s been kicked off […]

Ivanka Trump: One Little Riot Is Not Gonna Stop Me From Being President Someday!

These days, Donald Trump has about as many powerful allies as that German fella did when he tied the knot with his actress girlfriend in that bunker. Former bootlickers like Michael Cohen and Anthony Scaramucci jumped ship long ago, and now the president has managed to alienate Mike Pence and Mitch McConnell, who recently downgraded […]