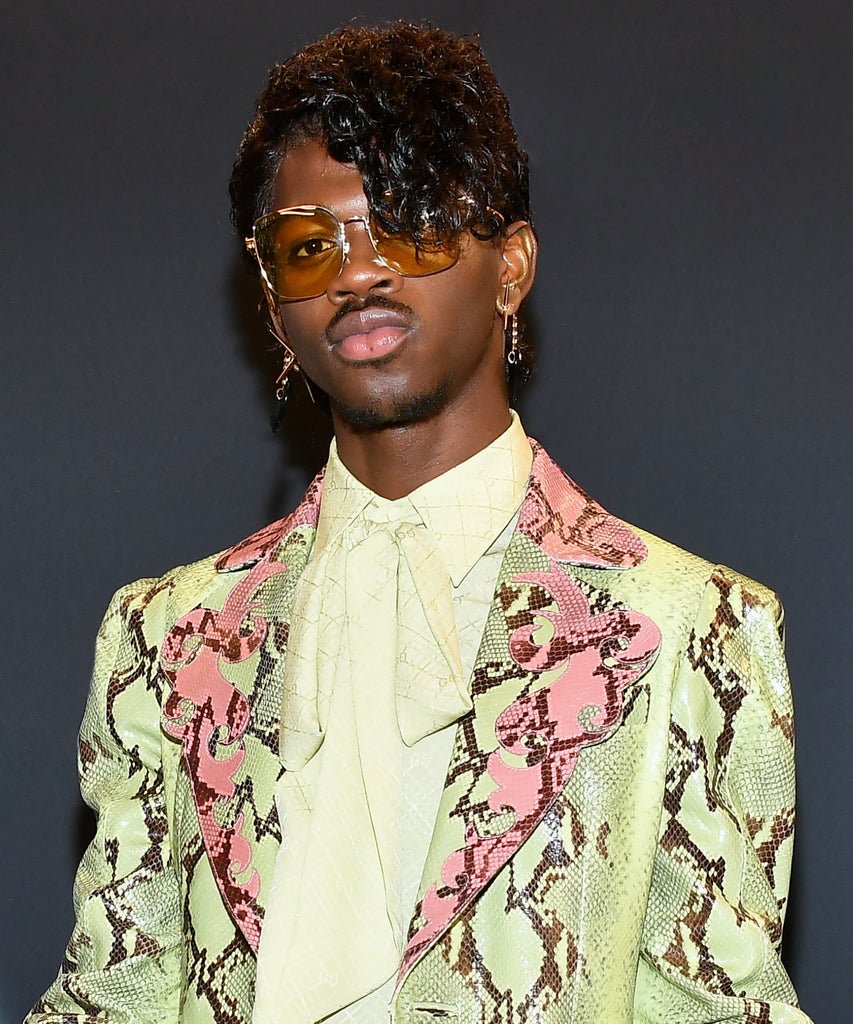 Awards shows may be virtual this year, but Lil Nas X is proof that you can still go in with a bang — literally. The rapper attended the 2020 Billboard Music Awards last night and walked away with this year’s honor for Top Hot 100 Song while rocking an ’80s-inspired “bayang,” as the TikTok meme goes.

Fans of the side-swept wet-and-wavy mullet created by celebrity stylist Evanie Frausto flooded X’s social-media comments with “bayang” jokes and comparisons to the late, great Prince. “Psychedelic Prince vibes,” one wrote. “Giving me Prince vibes with the hair,” said another. The star’s deep-parted side bang was the icing on top of his retro look, which featured a snake-printed Gucci suit with pussy-bow blouse, large brown sunglasses, and neon green nail polish.

X’s BMAs look made a splash, but it wasn’t his first time changing up his hair: Back in September, X shared a snap of a flat-twisted weave ponytail, and in January, he wore Naruto-style spikes for a video shoot. At the 2019 VMAs, he also wore black monogrammed nail art.

In his speech last night, X declared next month “Nasvember,” and dubbed his upcoming album the “greatest of all time.” If his forthcoming work is anything like his debut year, we’re preparing ourselves for much more head-bopping music and a lot more iconic beauty looks.

Following a season of pink dye jobs and at-home trims, hair trends are looking a little different this fall. For an on-trend refresh, everyone’s asking for professional curtain bangs (take a scroll through TikTok for inspiration) and a summer-forever shade of bright blonde. Kylie Jenner is the latest A-lister to go a lot blonder. This […]

What To Know About Kristen Welker, The Moderator Of Tonight’s Presidential Debate

TODAY — Pictured: Kristen Welker on Friday, January 10, 2020 — (Photo by: Nathan Congleton/NBC/NBCU Photo Bank via Getty Images) Donald Trump and Joe Biden will face off in the second and final presidential debate tonight, which will hopefully be less of a train-wreck than…whatever that first one was. In an attempt to foster a […]

Courtney Stodden Flaunts Boobs to Promote New Memoir, Might Be the Greatest Marketing Genius of Our Time

It’s been a while since we checked in with Courtney Stodden. Some things have changed (she’s no longer a blonde!) while others, of course, have remained the same (she still enjoys posing in racy pics in various forms of undress, and for that, we thank her). But in all seriousness, Courtney has been through a […]