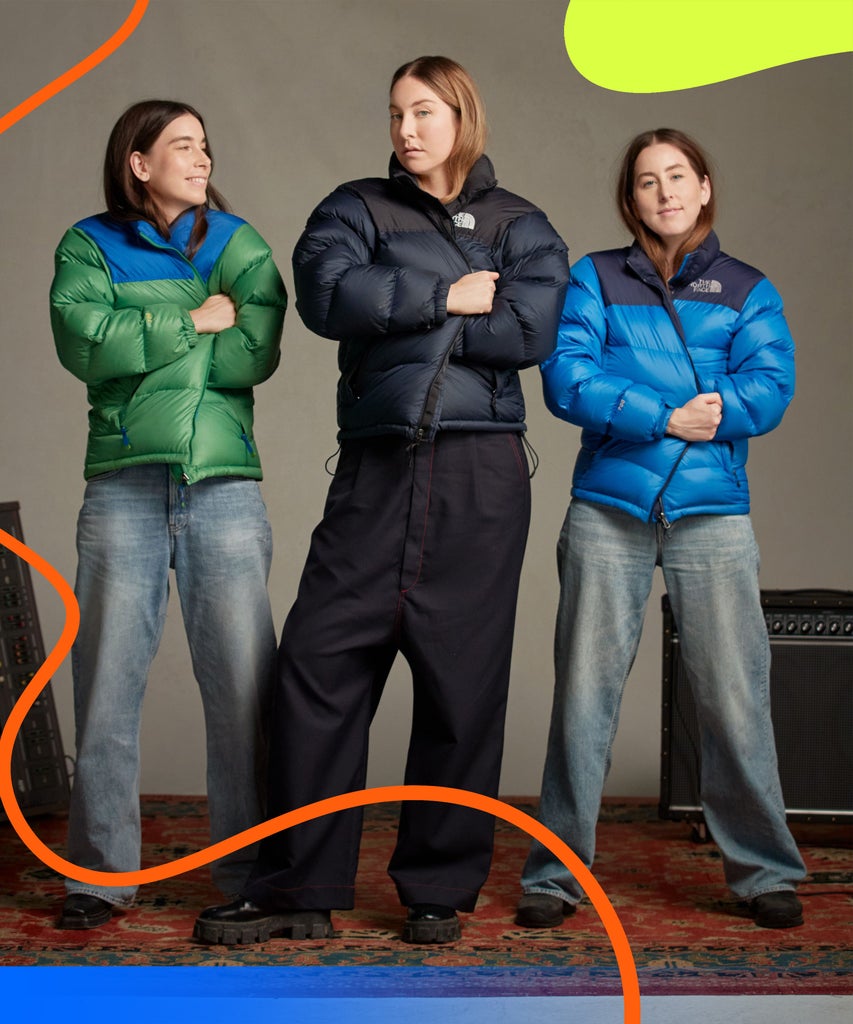 When a demanding performance schedule takes three sisters across climates and continents, from sandy summers in Sydney to the depths of winter in Norway, one can only imagine the kinds of conversations happening. For Danielle, Este, and Alana Haim, the trio behind the L.A.-based pop-rock band of the same family name, one sentence, in particular, is repeated with such regularity, it could be mistaken for the refrain of an unreleased song: Who took my North Face jacket?

“That sentence has been said many times on tour,” Alana tells me over Zoom once she and Danielle are finally able to log into our call after some technological difficulties. It’s the kind of pandemic-era communication pitfall that Alana assures me, the creator of the cyber meeting, isn’t my fault. Mercury, she points out, is in retrograde. “You’re totally fine, it’s very much cosmic,” she says, before moving on to the subject of missing outerwear. When I ask who among the three sisters is usually to blame when an article of clothing vanishes, Alana is quick to identify herself.

“It’s very rare that I wear anything that’s 100% mine. I think 90% of my outfits on a daily basis are from Danielle’s closet,” she admits. “She loves it,” Alana continues at the same exact moment when Danielle chimes in agreement: “It’s so fun for me to get new things, and if my sisters take them, it’s all good.” It’s proof that they’re very much tuned in to one another’s thoughts in that telepathic, sisterly kind of way. I can only imagine Este, who wasn’t on the call, is on that same wavelength too. And Alana and Danielle assure me that if I like their stories, I should hear Este’s. She’s the best storyteller of the bunch.

Their affinity for multifaceted storytelling extends to discussions about their favorite jackets from The North Face. The coats have seen these sisters through every step of producing and performing their music, from morning hikes around LA where lyrics were contemplated, to trips on the tour bus where they’ve doubled as “security blankets,” Danielle says. To her, a classic and durable jacket is like a coat of armor to be worn when exploring new places. To Alana, it’s a time capsule preserving tickets, stickers, and various other commemorative curios that can be revisited at the end of a big tour.

“They do stand the test of time,” says Daneille. “They’re so well made that you kind of only need one jacket for your whole life, which really just makes room for millions of stories in your jacket.” It’s this sentimentality that’s practically woven into the fabric of their jackets that compelled HAIM to participate in The North Face’s It’s More Than A Jacket campaign, which launches today in celebration of the memories created over the brand’s more than 55-year history. To capture the meaning behind every piece of gear, The North Face has created its first-ever crowdsourced digital archive, calling on wearers around the world to post tales and images of …read more

Soon after Queen Elizabeth cancelled her trip to Northern Ireland, various royal commentators pointedly suggested that this is the moment for the heirs to step up in a bigger way. Prince Charles already does 400-plus events every year, and clearly he’s been taking over even more in recent years, establishing himself as the Shadow Regent. […]

Farrah Abraham is living proof that you don’t have to be well-liked to be popular on social media. The former Teen Mom OG star has a following of 3.1 million, but she gets lambasted in the comments pretty much anytime she posts anything.’ But in the end, we guess the joke is on the people […]

Fans were on an emotional roller coaster as they watched the Season 2 trailer for 90 Day Fiance: The Single Life. Among many other surprises, it was revealed that Jesse Meester and Jeniffer Tarazona are dating. Both stars previously appeared on the franchise while dating Americans. Neither relationship worked out. But … are viewers ready […]