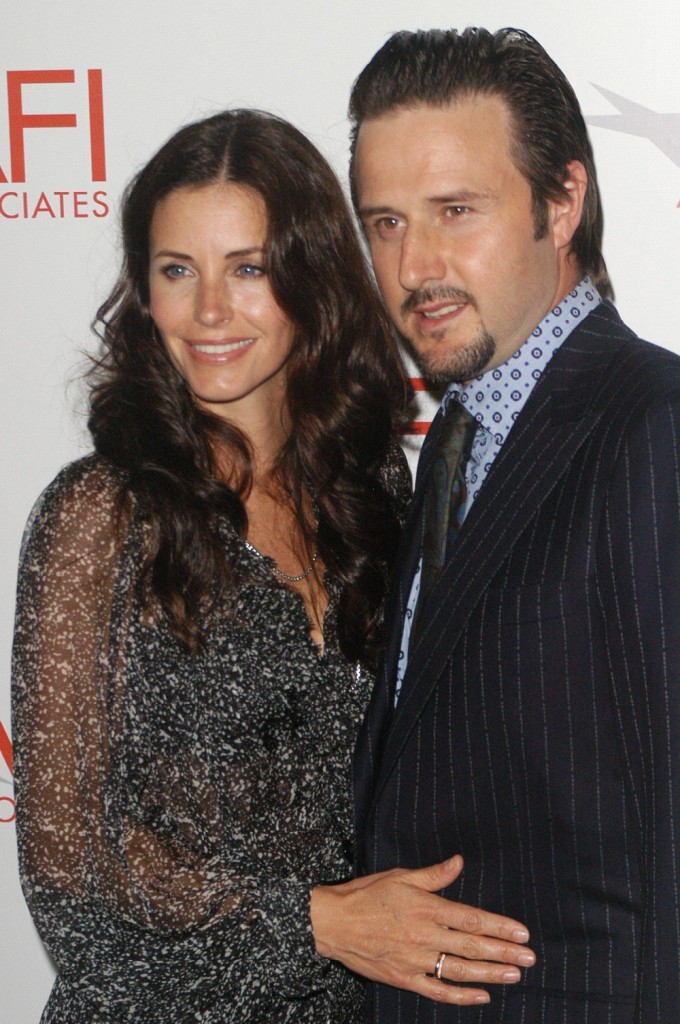 A few days ago, Kaiser linked a video of David Arquette, Neve Campbell and Courteney Arquette on The Drew Barrymore Show. During that segment, the cast referred several times to late director Wes Craven who was responsible for the Scream franchise. I don’t know much about Wes beyond his films, but the cast really misses him. I guess he was much more than just a director to them. In David’s case, Wes truly changed the course of his life. According to David, if it wasn’t for Wes, he might never have dated Courteney. Apparently, Courteney had fallen for David, but he was doing anything about it. So Wes sat him down, told him to get his act together and ask her out. The rest, as they say, is history.

David Arquette and Courteney Cox’s Scream characters Dewey Riley and Gale Weathers fell in love onscreen under the direction of Wes Craven. And as Arquette, 50, tells it, the late director also played a role in the actor entering a relationship with Cox off-screen, too.

“Wes had a real impact,” Arquette tells PEOPLE in this week’s issue. “[He was] like, ‘David, you know she likes you and you should really get your stuff together.’ He gave me a real man-to-man talk and that had an impact on the course of my life.”
Arquette remembers being excited to first meet Cox. “I was a fan of hers,” he admits, adding of the rest of the cast, “everybody was really nice, so it was a great time.”

Courteney and David were married for 11 years before they separated and it took three years for their divorce to finalize. They have never been nasty to each and co-parent their daughter Coco beautifully. David is remarried with two more kids and Courteney’s relationship with Johnny McDaid seems to be pretty solid. Of Hollywood relationships, Courteney and David’s is one of the more successful. So Wes knew what he was doing to push these two together.

I wonder why David was dragging his feet in the first place? The way I read his comments, it wasn’t because David didn’t know Courteney was interested. My guess is he was intimidated. Courteney was Prime Monica when she walked on the Scream set. I’ve heard she’s a nice person but her place as a Friend cast a long shadow wherever she went, I’m sure. She was one of the biggest names on Scream, next to Drew. Whatever his reasons, David got over it and they had a lovely story together. Even if folks don’t stay married, it doesn’t mean they don’t get their Happily Ever After. Clearly, they are very close and adore the daughter they created. And I’m sure Wes is looking down on their families from where he is.

Anna Duggar: Is She Stuck With Josh Because of Their “Covenant” Marriage?

If you know anything about the Duggar family, then you’re probably aware that Jim Bob and company have some very strange ideas about relationships and marriage. The sample size is small, but since the first Duggar kid to get married has committed multiple sex crimes and is currently in prison for possessing child pornography, thus […]

Found: The Comfiest Chairs To WFH In

If your head, shoulders, lower back, and butt aren’t currently killing you, then you’re probably reading this from the comfort of a supportive seat — and following the uncrossed legs, 90/90 rule like a posture pro. The transitional road to working remotely has had its bumps, and one that we’re currently still navigating is physical […]

You’re reading an On-Site Shopping story — meaning you can browse, add to cart, and actually purchase the product recommendations featured below without leaving Refinery29. To learn more about our new native checkout feature, click here. If you thought Amazon was THE big a$$ e-tailer boasting an endless trove of hidden-gem treasure, then hold onto your […]