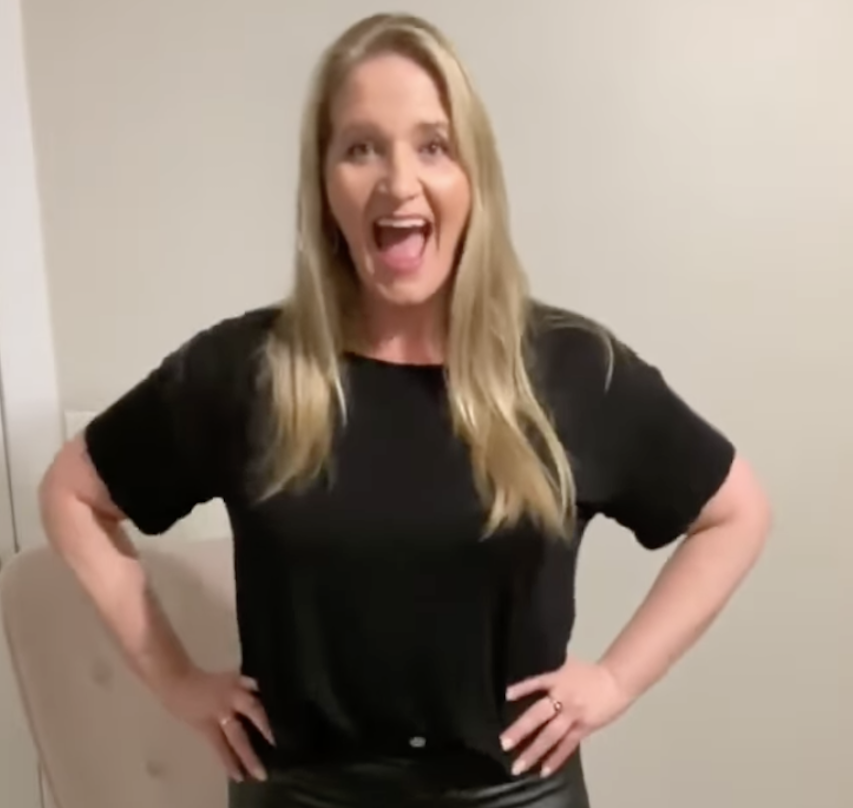 Christine Brown is single and ready to mingle…

… with whatever comes her way over the next 12 months or so.C

After leaving her nightmare of a spouse in November 2021, Christine spent more of the following year rebuilding her life in Utah.

TLC viewers, meanwhile, watched the dissolution of her marriage plays out on Sister Wives Season 17.

What, Christine Brown worry? The Sister Wives star is looking forward to 2023.

Fast forward all this time, with Christine feeling like a confident goddess these days, and the veteran reality star can’t wait to tackle the near and long-term future.

“I feel amazing and [am] making 2023 my year!” the 50-year wrote this week on Instagram, along with clips of her working out.

“Everyone has the potential to feel their best – you just need to decide to take that one small step forward. Progress is progress.

“Commit to your day one and don’t look back! #dayone #healthyliving #healthyhappy #2023 #enjoytheride.”

Christine Brown has a big smile on her face in this still image from part three of the Sister Wives tell-all.

And she also penned a tribute to the year ahead in the wake of this decision.

“It’s all about slow and steady that wins the race. 2023 is my year!” Janelle wrote just before the calendar flipped, including this message along with her own exercise footage.

Similarly, on Monday, Christine uploaded a compilation video of herself rock climbing with her daughters Ysabel, 19, and Truely, 13.

“We went rock climbing in Utah, just one of the many blessing I have from living so close to my kids @ysabelpaigebrown & Truely liked our adventure too,” Christine captioned the video.

Fans of Sister Wives sent Christine messages of support for her self-improvement and personal goals as a single woman after she posted these photos, clips and captions.

“Watching you come alive is magical, and people who need to see this because they think it isn’t possible are watching,” one Instagram follower commented.

“You are a role model and a hero, showing others that it is never too late to flip the script and choose you!”

It’s hard to say what lies ahead for Christine, but she has no regrets over choosing to leave her plural marriage.

“I might do two dates with one guy. And two dates is kind of where we’re ending it right now,” she recently told Today of her current love life.

“But I’ll do one date for sure. And then if we like each other, we’ll go out again. Then after that, it gets scary. It’s super, super scary.

“I don’t want anything serious. I just want to have fun. I like my life too much to mess with any kind of a serious relationship.

Christine Brown: Bring It On, 2023! This is Gonna Be My Year! was originally published on The Hollywood Gossip .

The 34 Best Pairs Of Cotton Underwear For Down There

Cold weather is here, which means more layers and the heightened possibility of nether-region irritation, and we’re on the hunt for undergarments that will do the least harm during this risky time. TL;DR: that “best” underwear, friends, is tried-and-true cotton — and that’s why we’ve been on a mission to find the best cotton underwear for […]

Yes, You Can Be Friends With Your Ex — But Should You?

Thanks for reading Can We Talk?, a sex and relationships column that aims to tackle the burning questions about sex, dating, relationships, and breakups that you’re too afraid to ask your partner — or maybe even your besties. Last time, relationship therapist Moraya Seeger DeGeare, LMFT, helped a reader who was struggling with the fact […]

One of the most endearing couples on the 90 Day Fiance: The Other Way Season 4 premiere was Gabriel and Isabel. Gabriel Paboga is an entrepreneur from Florida. He met Isabel Posada while on a work trip to Colombia. They hit it off, and now he’s prepared to uproot his entire life to be with […]