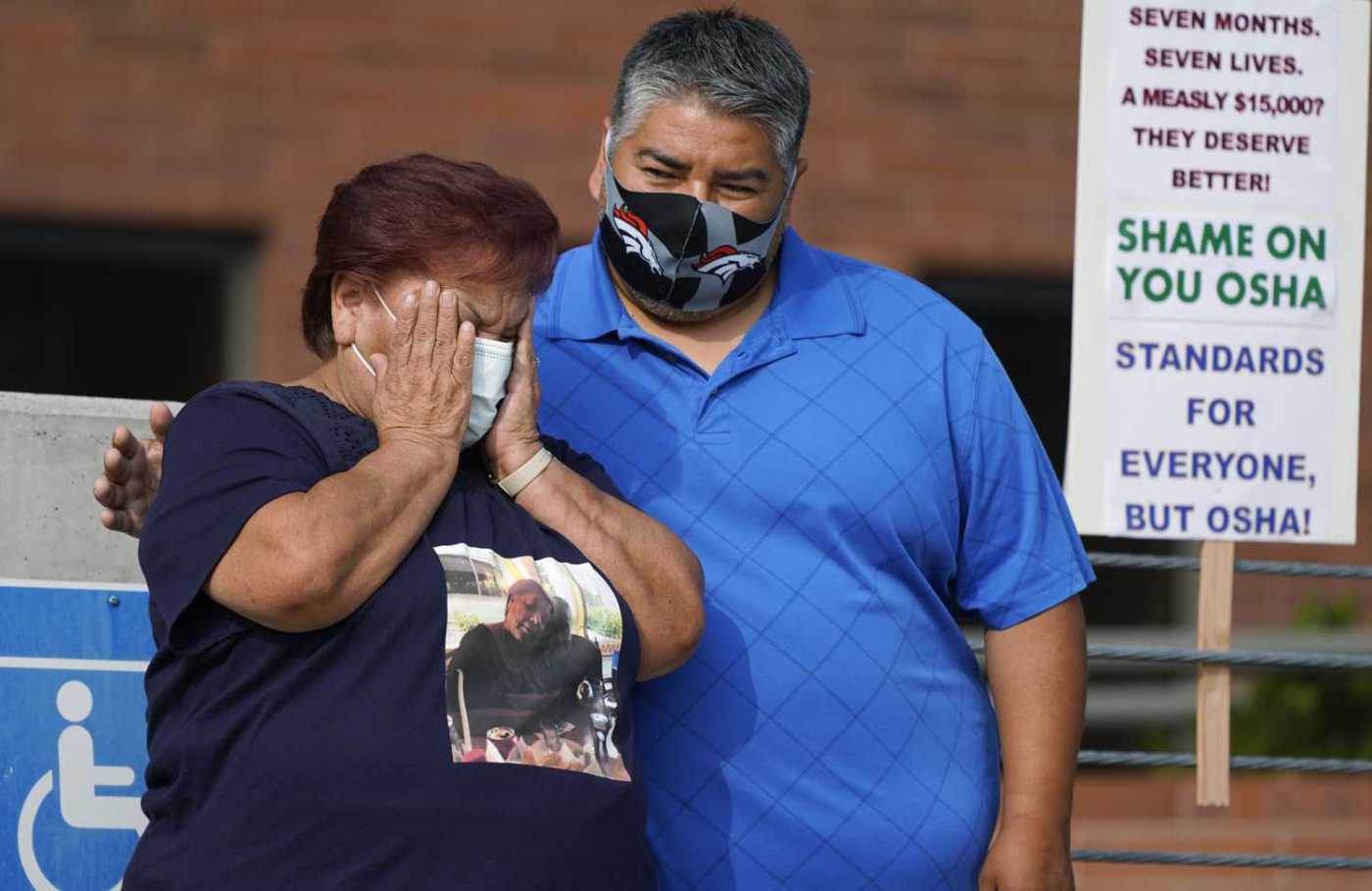 A union representing workers at a Colorado meatpacking plant where six workers died of COVID-19 and hundreds more were infected staged a protest Wednesday, claiming that federal officials should have fined the company more for its alleged failure to provide safe working conditions.

The JBS USA-owned plant in Greeley was issued a $15,615 fine on Sept. 11 by the Occupational Safety and Health Administration, or OSHA.

The United Food and Commercial Workers International Union called the fine for the multibillion dollar company “insulting” and “ineffectual,” but JBS says it’s unwarranted. The union’s Local 7, which represents about 3,000 workers at the plant, asked co-workers and relatives of those who died and were infected to protest outside OSHA’s Denver offices.

“After seven deaths and seven months they issued a lousy, measly $15,000 fine,” local president Kim Cordova declared to several dozen demonstrators, some holding signs that read “Shame on OSHA” and “Life is cheap for JBS.”

“Fifteen thousand dollars is not going to stop them or force them to be a better and more responsible employer,” Cordova said.

One of the first things Saul Sanchez, who’d worked 30 years at the plant, did when he was diagnosed with the coronavirus in March was to let his supervisor know he’d miss work, daughter Beatriz Rangel told protesters.

“My dad’s biggest concern was calling JBS,” she said. “My dad had more concern for his co-workers and the employees of JBS than JBS did themselves.”

Sanchez, 78, died of COVID in April. Another daughter, Patty Rangel, an ICU nurse, said Wednesday she was present when personnel turned off his ventilator.

Fifteen thousand dollars “doesn’t even cover one funeral,” said Rosario Hernandez, the wife of Alfredo Hernandez, a janitor at the plant who was sickened by the virus and still uses a breathing machine.

OSHA said JBS Foods Inc. in Greeley — operating as Swift Beef Co. — failed to protect workers from exposure to the coronavirus. The fine followed a plant inspection in May and is the maximum allowed by law, OSHA said.

JBS failed to protect workers from getting sick and didn’t adequately compensate them for working under the risk of contracting the virus, the union said in a statement. At least 290 workers at the plant tested positive for COVID-19, the Colorado health department has said. One corporate supervisor at the facility also died.

In a statement Wednesday, JBS USA said the fine “is entirely without merit” and “attempts to impose a standard that did not exist in March as we fought the pandemic with no guidance.”

JBS said protective measures at the plant follow, if not exceed, guidelines for safety and social distancing issued by OSHA and the U.S. Centers for Disease Control and Prevention and had been approved by local and state health authorities.

Those measures include 24-hour cleaning at the plant, random testing of employees, screening employees before work, staggered shifts and breaks, physical barriers between workstations and other measures, Cameron Bruett, head of corporate affairs, said in the statement. He said there have been no positive cases in Greeley …read more

Does anyone really believe that, as the Centers for Disease Control reported last month, only five percent of American women have one drink every day? I know we are supposed to be celebrating the legacy of Susan B. Anthony this year, but between the mistreatment of immigrants and anti-Catholic vandalism, I think she would be […]

‘Behind the 8-ball:’ Many Southern California nursing homes hit hard by coronavirus had prior issues

Evangelina Gonzalez survived the coronavirus. But she found herself lonely and confused inside her nursing home. The 98-year-old, who has dementia, had fallen a couple of times at Monterey Palms Health Care Center in the Coachella Valley, her son said. After contracting the virus last spring, she was placed in an isolation wing for six […]

MILPITAS — Some real estate woes have begun to surface in the Bay Area in the form of bankruptcies for two residential projects, fresh reminders of coronavirus-linked economic disruption and uncertainty. The owners of the properties, one in El Cerrito and the other in Milpitas, seek to reorganize the finances of the projects under Chap. […]