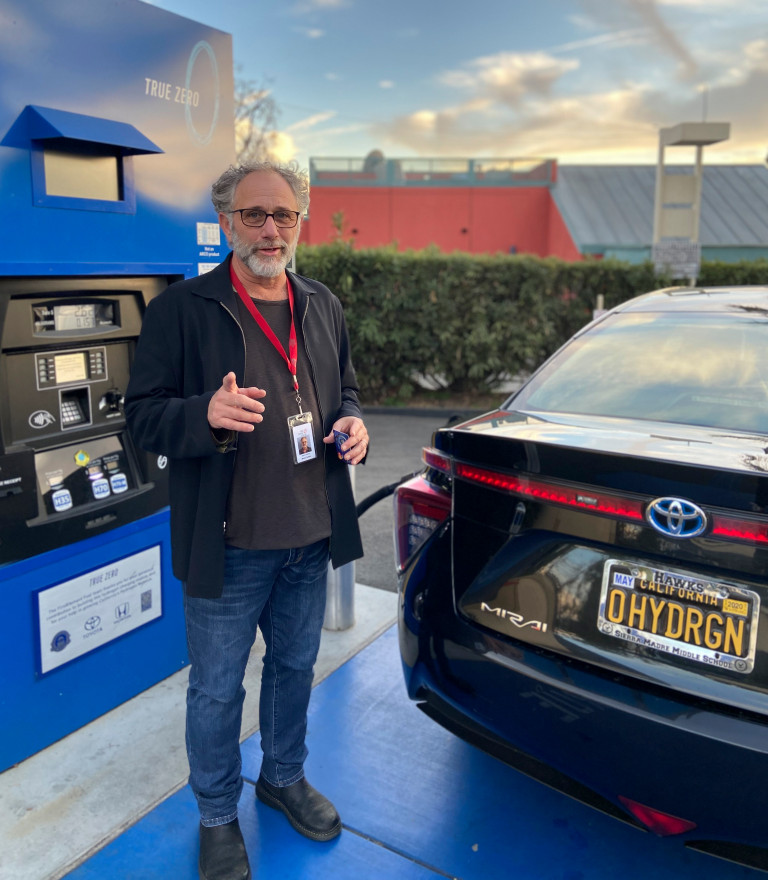 California has been dreaming of a clean, modern hydrogen highway since 2004, when former Gov. Arnold Schwarzenegger ordered preparations for a traffic jam of zero-emission, hydrogen-fueled cars, buses and trucks.

That revolution, part of the battle against climate change, never materialized. The technology remains expensive and hasn’t gained wide traction, ceding the green-transportation crown to battery-powered electric vehicles, which are more widely available and support an ever-growing recharging network.

But with successful pilot projects using hydrogen buses and freight trucks, and car manufacturers preparing to expand model options in the tiny consumer car market, proponents say this may be the year when the “fuel of the future” finally arrives.

“Its moment is due. You are starting to see a sea change, as we get more aggressive about meeting our zero-carbon goals,” said Tyson Eckerle, deputy director of zero-emission infrastructure in the Governor’s Office of Business and Economic Development.

The state has continued to foster the promise of hydrogen fuel to pry carbon from transportation, California’s biggest source of planet-warming emissions. It has spent more than $300 million in the past 10 years funding rebates for those who buy or lease hydrogen cars, construction of refueling stations and the purchase of transit buses, as well as subsidizing development of hydrogen-driven freight trucks.

And, at the moment, California is the hydrogen market: All but a handful of the 7,800 hydrogen-powered cars in the U.S. are here. For car-centric Californians, there’s much to like: Hydrogen vehicles fuel up in a few minutes — as opposed to hours of charging for most electric vehicles — and their efficiency affords a long driving range.

Hydrogen as a transportation fuel has many applications. More than 26,000 hydrogen-powered forklifts are whirring around warehouses today, for example. The U.S. space program has long used hydrogen as rocket fuel. And more than a decade of testing hydrogen engines in transit bus fleets has produced results that surpassed projections, exceeding time without major repairs or replacement needed as compared to diesel engines. Hydrogen-fueled trucks are lighter, which translates into efficiency for long-haul drivers.

Eckerle said the dozen or so state programs encourage hydrogen technology to increase consumer choice — “seed-planting.” This investment will soon be eclipsed by that of private companies, he added.

The challenge for the automotive industry is overcoming basic market forces. There may be nearly 8,000 hydrogen cars on California roads, but that’s a microscopic number amid the state’s 35 million registered vehicles.

The cars are not easy to find, nor are the fueling stations: California has only 44 such stations, mainly in populous cities. It’s nearly impossible to fuel up a hydrogen car at home, so a broad network of stations is critical to wider adoption, experts say.

One reason motorists may not notice the hydrogen cars in their midst is that hydrogen-fueled Toyotas, Hondas and Hyundais don’t look much different from other sedans. That obscurity could end this summer, though, when hydrogen cars and shuttle buses built in Japan will be showcased at the Tokyo Olympics. Even …read more

Homebuyers in metro Denver will need to put aside visions of a more bountiful banquet of properties for sale in the new year. Owners are staying home, literally, and that should keep them in control of the market going into 2020. The inventory of homes and condos available for sale in metro Denver plunged 27.9% […]

Fugitive tycoon Ghosn describes his Japan arrest as a ‘travesty’

By Zeina Karam and Sarah el Deeb | Associated Press BEIRUT — Nissan’s fugitive ex-boss, Carlos Ghosn, said Wednesday that his arrest in Japan, from which he escaped last month, was a plot against him and described his detention conditions as a “travesty” against human rights. In his first appearance since his daring and improbable […]

Citizens of the West 2020: Marcy and Bruce Benson’s power-couple prowess

Decades of service to Colorado and a nearly unmatched fundraising and organizing prowess netted Marcy and Bruce Benson this year’s Citizens of the West award from the National Western Stock Show. True to the award’s collaborative spirit, they’re quick to credit each other for most of the work. They’ve operated as a team in Colorado […]